Some years ago, back in 2012, I posted photos and a description of the prototype Southern Pacific waybill box I had managed to acquire at a Winterail event. You can read that post, including some good examples of the kind of agent’s messages that were sometimes provided to crews in these boxes, at this link: https://modelingthesp.blogspot.com/2012/03/bill-box.html . These boxes, as I showed in that post, were on the outside of SP depots, normally near the trackside door into the office area.
In that prior post, however, I did not even give the dimensions of the prototype bill box, though they were added in a comment at the end of the post. Just to repeat, my SP box is 13 inches tall at the back, 11 inches tall at the front, 6 inches deep, and 9 inches wide. Of course, most of these boxes were made informally, many from plywood, and may well not have been standard, but these dimensions provide a starting point. And incidentally, a follow-up post showed a prototype SP bill box at a restored depot (see it at: https://modelingthesp.blogspot.com/2012/06/bill-box-update.html ).
I have been adding HO scale bill boxes to the depots on my layout. From what employees have told me, in the transition era they were usually SP’s depot trim color, Light Brown, and indeed, B&W photos from that period show a darker color than the Colonial Yellow walls. In the late 1960s, bill boxes at depots still in operation were often painted aluminum, and still later, some were painted red. The prototype one that I have is definitely red.
The easiest way to make an HO scale bill box for a depot or freight house is to start with Evergreen styrene strip, say, scale 6 x 10-inch size (no. 8610) — not exact but close enough.  Then file a shallow angle on one end and cut it off to be 13 or 14 scale inches tall at the top, and paint to suit your era (mine need to be Light Brown). Here are a couple of them: 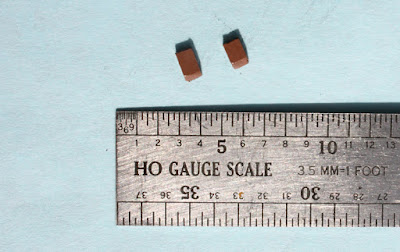 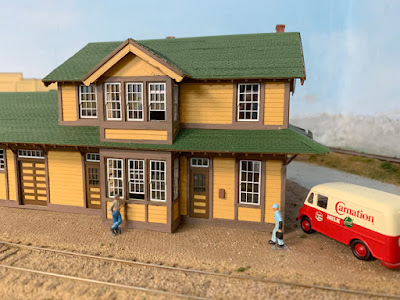 I have even applied a bill box to the depot in my layout town of Ballard, though it is on the side of the depot that would only be visible for someone standing inside the layout (which isn’t really possible, of course). My apologies for the somewhat washed-out photo. 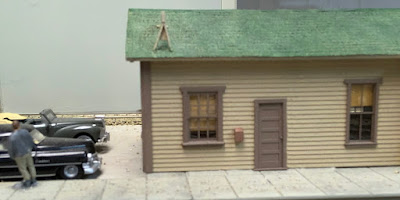 But these scale-size bill boxes are of course far too small to serve any purpose in an operating sessions. What I have been using recently are old oak file boxes, for 3 x 5-inch cards, to serve as bill boxes. Any waybills a crew needs in a town, along with any agent’s message, can be found here, and crews are by now accustomed to this. That’s the box on the fascia shelf. Can one do better? I have often had a brief thought that it would be nice to have a bill box that looks like the prototype, but have never gone farther than that. So you can understand that I was startled and gratified to see just that kind of bill box, when I visited Dave Salamon’s layout in Tulsa, Oklahoma a few weeks ago. He had built exactly what I imagined! The instant I saw it, I had to take a photo. 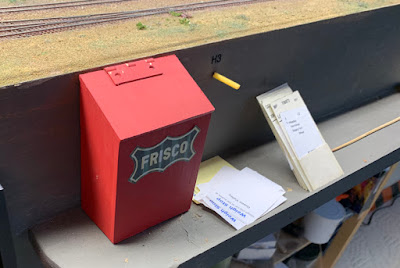 The top is hinged, whereas the SP prototype opens at the bottom (as I showed the post whose link is in the first paragraph of the present post), but that’s just a detail. Dave’s layout is N scale, but of course that has nothing to do with the size of waybills that would be inserted into this box. 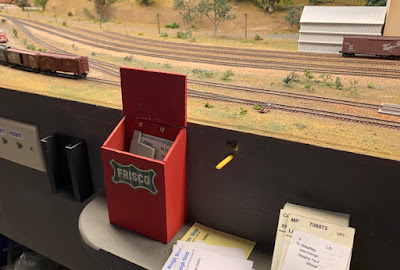 I was delighted with this discovery, and Dave immediately told me he had written a description of it for N -Scale Magazine, published in the issue for September-October 2017, and he was kind enough to send me a PDF of the article. With Dave’s permission, I show below the dimensions of his bill box (which he uses to serve an interchange with the Frisco on his layout). 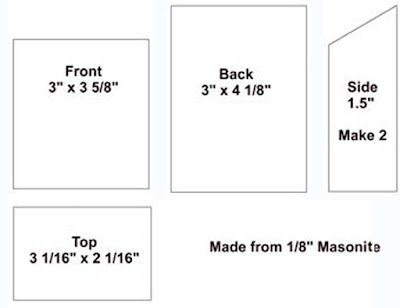 This is neat, and I am strongly tempted to use the idea myself. My waybills would fit in the 3-inch width of this design, though I might make it a little taller (if the front piece is 4 inches tall and the back then increased to 4.5 inches, it would be a better fit for me).
This was quite a discovery, and full credit and congratulations to Dave for the idea and its implementation, as well as for sharing it in print. Now I find myself having that thought once again, “Wouldn’t it be nice to have more prototypical bill boxes on the layout . . .”
Tony Thompson
Posted by Tony Thompson at 11:49 AM