Modern couplers in an Ulrich gondola

Older modelers are certainly familiar with the cast white-metal Ulrich freight cars, including their early-style GS (General Service) drop-bottom gondola. Younger modelers have probably seen them on layouts, at swap meets, or on eBay. They are really a pretty good representation of the Enterprise GS gondola design of the 1920s, purchased by a number of railroads. Southern Pacific was prominent among those railroads, thus my interest, but UP and several other roads acquired similar if not identical gondolas. Here is an original Ulrich kit box for those who might not have seen one. 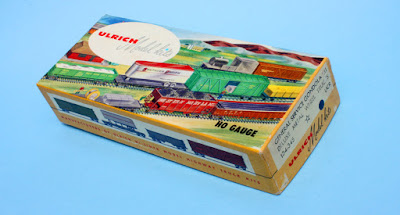 As the box lid shows, they also made hopper cars, box and stock cars, flat cars, and a War Emergency outside-frame gondola. They also made an extensive line of nice highway trucks.
One of the challenges of many of these freight car models is couplers. If built according to the kit directions, they are supplied with a cover plate to fit the coupler box that is cast onto the car body. In early Ulrich kits, this cover was a sheet-metal part, but later was a white-metal casting. This cover plate has a small hole in it, which fits over a slender post (with a hollow end) in the coupler box, and the modeler is instructed to rivet the end of the post over the plate, securing it in place. Step 5 of the GS kit directions shows this. Shown below is this coupler box before a cover plate (shown resting on the underbody next to the coupler box) is added. You can see how slender is the post inside the coupler box. 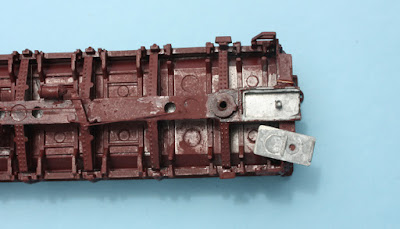 But modern couplers depend on a considerably larger post, so using the original coupler box as-is doesn’t work well. There are a couple of approaches that can  be taken. One is to start with a Kadee coupler box lid, and remove the center post, placing that post over the Ulrich post, then installing the Kadee coupler and riveting on the cover plate. This is simple, but has the drawback that the riveted cover plate precludes any further adjustments or repairs.
Another approach is to remove the Ulrich post, drill and tap the base of the coupler box for a 1-72 or 2-56 screw, open the cover plate hole to clear this screw, add that center post from the Kadee lid, and then assemble the Kadee coupler with its normal spring. Here’s an example. 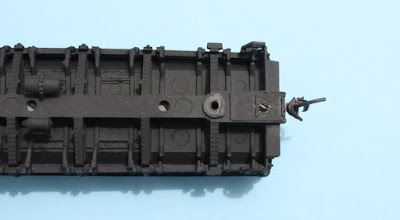 The method shown above does work, but an even simpler method occurred to me. I took the Kadee box lid with its post, and simply fitted it upside down. That is, the lid is intended to be on the top of the box, when the freight car is upright, but I placed it like the Ulrich cover plate, so that on the upright car it is on the bottom of the coupler box. I used a Kadee whisker coupler here (No. 158) to avoid any issues with fitting the sheet bronze spring.
Next, I glued on the box lid with canopy glue, which might seem to defeat the desire to have access to the coupler for maintenance, but the glue is readily cut with a razor blade or softened with water, so if access becomes necessary, it can readily be accomplished. Here is such an installation, before painting boxcar red. 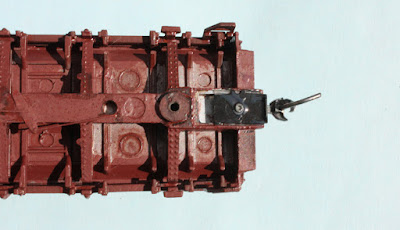 Either the screw closure using the original Ulrich box lid and a Kadee post, or the Kadee box lid, work well and are a way to provide modern couplers in this older model, while avoiding the permanence of riveting on the cover plate.
Tony Thompson
Posted by Tony Thompson at 10:20 AM