The concept of a “sure spot” means a particular point at which a car must be spotted, such as one particular spur, or a particular loading or unloading facility along a spur, or even a particular door at an industry. I wrote about these awhile back (see that post at: https://modelingthesp.blogspot.com/2016/08/operating-with-sure-spots.html ) to define terms, and to describe some of the issues in my own layout operating sessions. The present post pursues this topic further.
(Part 2 of the series can be found at: https://modelingthesp.blogspot.com/2017/11/more-about-operating-with-sure-spots.html .) That post described the need for information cards at various layout locations, derived from the excellent paperwork provided to operators on Al Frasch’s old layout on Whidbey Island in Washington. I implemented Frasch’s ideas to make my own information cards, and then I showed some examples in Part 3 of the series. You can see Part 3 at: https://modelingthesp.blogspot.com/2017/12/operating-with-sure-spots-part-3.html .)
Let me illustrate a problem I am trying to solve (or at least make into less of a problem) with the model tank car shown below. It is an acid tank car, that is, without bottom outlet, which means it has to be unloaded through the dome. It is a 7000-gallon model from Tangent.

This car is classified in the AAR system as Type TA (where originally “A” meant acid, though eventually the designation came to mean any car without a bottom outlet).
Next I show a possible waybill for this car. Most tank cars carrying chemicals on my layout will go to this same destination, Pacific Chemical Repackaging. Note that the car type, TA, is on the waybill, for those who might not recognize that this is an acid tank car. 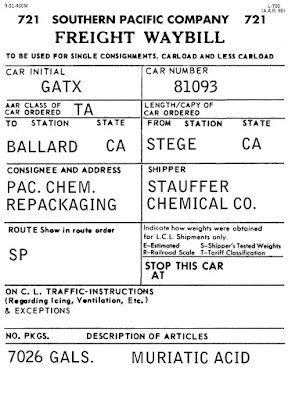 Many waybills in my system do indicate desired car spots, but as you see above, many do not, as was prototypical. In part this was because crews that did the job every day knew very well where each kind of car would be spotted. The information card idea, described in the Part 3 post cited in the second paragraph of the present post, is an effort to encapsulate that kind of knowledge.
So for additional help when the waybill doesn’t specify the spot, here is my Frasch-style information card for that part of the layout: 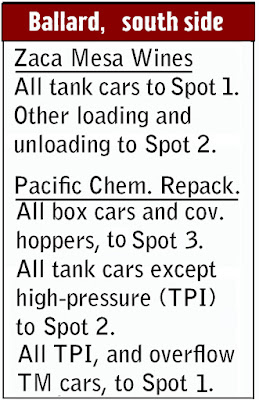 This should clearly describe how cars are to be spotted. Crews may also be using the schematic town map for Ballard, which shows the location of all industries and their designated spots. Shown below is the map portion relevant for Pacific Chemical Repackaging, and this clearly shows where Spot 2 is located on Track 3.

Yet even with these information resources (the waybill, map and information card), crews do sometimes fail to correctly spot the car. A local crew may not recognize that this car has an acid-type dome, though the waybill directly tells them that it’s a Class TA car, and indirectly tells them that with its identification of the acid cargo. Moreover, the information card instructs that cars other than high-pressure (TPI) cars should go to Spot 2.
My last backup for information is the agent’s message (see, for example, my description at this link: https://modelingthesp.blogspot.com/2015/06/operating-with-agent-messages.html ). The agent’s message at Ballard for a recent session did specify placing this car at Spot 2. Yet despite all this provided information, the car was spotted between spots 2 and 3, as you can see below. On the prototype, that would mean that without moving the car, neither unloading spot could service the car. So despite all these kinds of guidance, there have still been occasions when the spotted car was like this photo. 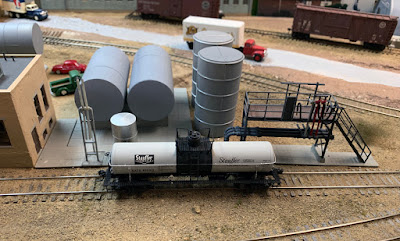 Note in the photo above that there is a top-unloader fixture at Spot 2, which of course is what a Type TA car would neeed for unloading. Spot 1, to the right, has all the hoses to unload high-pressure cars.
The photo above represents, I think, a failure to read (or perhaps understand, or take seriously) directions. I am considering ways to try and make matters even more clear, perhaps by improving the briefing I give crews before they start work.
Prototype operation requires more than just attention by crews to paperwork. They also need to observe locations and the arrangement of each consignee siding, to determine what might be necessary for helpful and convenient spotting. I hope to convey those ideas to future operators.
Tony Thompson
Posted by Tony Thompson at 11:53 AM