My sessions at BayRails this year

As I have mentioned a number of times in recent months, the eighth iteration of the biennial BayRails operating weekend was held here in the San Francisco area during March 14 to 18. We had a strong attendance this year, with some 66 attendees actually arriving (naturally there had been some late drop-outs from the original sign-ups of 72). My layout was one of the 23 layouts that were options for attendees to choose for operating. I hosted three sessions, with my usual four operators at each one.
My layout was paired with Jack Burgess’s Yosemite Valley layout, meaning that the four-person crews worked at Jack’s in the morning of two of the days, then came to my house to operate in the afternoon. The third session was a “bonus” session on the Monday after the event ended, and was in the afternoon.
I had set up a session that was a bit more complicated than most, knowing that the visitors would all be experienced and skilled operators. This mostly means adding a car or two to each segment of the session. I also employed the full range of mainline trains and other complications to the session, some of which I omit in other sessions. Luckily, none of this caused problems. We did have a few misbehaving cars, an electrical surprise, and a derailment that apparently pushed a turnout out of gauge, but these are fixable things.
The first session was the test of the full range of what was in the session. I was pleased that one of the operators that day was a long-time friend, Jim Ruffing. He paired with Joe Green for the day’s operation. Below you see them, with Joe at left, analyzing the mainline schedule which operates through Shumala. 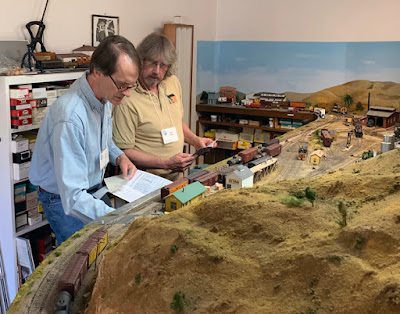 The other crew was another friend, Lou Adler, and Burr Stewart. Here they are, hard at work when it was their turn at Shumala. Lou is at left. 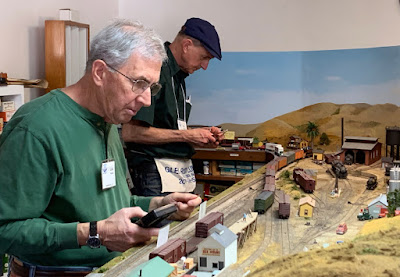 The second session, on the 17th, included two people who have operated on the layout before, though not with the full range of what was in store for BayRails, Al Daumann and Bruce Morden. The third person was Matthew Metoyer, but the fourth had a rental-car problem and had to drop out of the session. Matthew mostly worked by himself, but did share some work, as you see below, with Bruce, who is at the right. And on the wall is that layout clock, that directed the crew’s interaction with mainline trains. 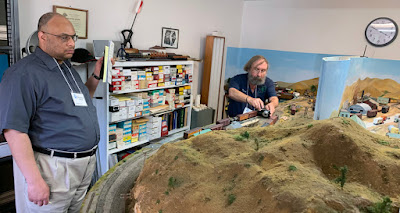 On Monday yet another four-person crew was on hand to operate. Once again, two were old friends from various other operating weekends, Travers Stavac and Bill Jolitz. Joining them were Dave Baraza and Jonathan Esposito. The photo below shows Travers (left) and Dave engaged in their work at Ballard. 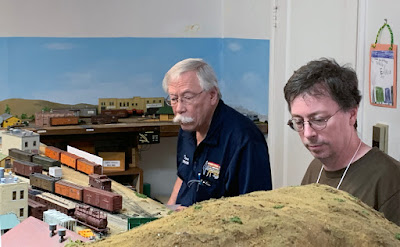 Meanwhile, Bill (at right) and Jonathan were working at Shumala. Here you see Jonathan acting as the conductor, and he is working through the waybills, while Bill was the engineer. 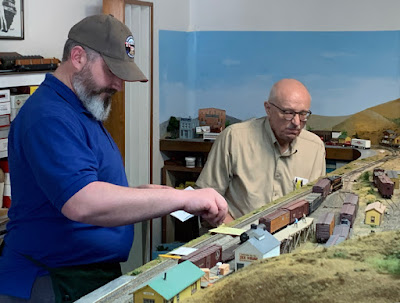 All the guests said that these were good sessions, and everyone seemed to enjoy the work they did. I naturally was uncomfortable about the glitches, but tried to keep in mind an insightful observation from Paul Weiss. It describes what Paul calls “Host Flaw Hysteria,” in which a host imagines each small flaw in an operating session to detract markedly from everyone’s enjoyment, and eventually the accumulated small flaws expand  to eclipse everything that went well in the session. Meanwhile, the guests, themselves familiar with the emergence of flaws during operating sessions, largely discount them and mostly remember what went well. So reports from the two viewpoints can differ markedly as to what transpired.
Accordingly, with Paul’s wise advice in mind, I listened to the comments from my guests, and in doing so, I have to say that we had successful sessions on my layout for BayRails VIII.
Tony Thompson
Posted by Tony Thompson at 11:25 AM