How were SP branch lines operated?

I am interested in how branch lines were operated (my personal era being the transition era), because my layout is predominantly a Southern Pacific branch off the Coast Division main line. There isn’t much traffic on the branch, so it is served by one or two local trains a day. It does not have any scheduled trains, in common with most SP branches, as shown in division timetables.
Recently an acquaintance (who shall remain nameless) said to me in a firm voice, “SP branches were operated under yard limit rules.” That means Rule 93. I was surprised at the generalization in the statement, but realized I didn’t know whether it was true for any branch lines, or true for some, or true for all. I first thought to check my 1955-edition SP rule book, and it simply gives a pretty standard version of Rule 93. There is no mention of branch lines. Here is the rule book statement: 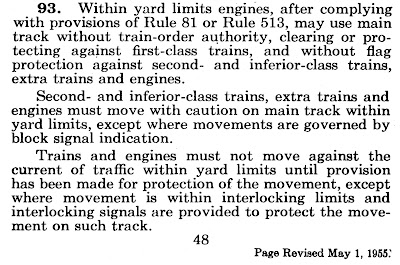 This is subject to Rule 81 or Rule 513, which are similar rules; Rule 513 is for operation in Automatic Block Signal territory. Rule 81 is the foundation of train movement rules. You can see below that it is the first rule in that section of the rule book.

As I suspected from the start, the operation of branch lines would be spelled out, not in the rule book for the entire railroad, but separately for each division. And this might or might not be included in employee timetables for a particular division, but would certainly be included, if in force, in division Special Instructions publications. Here is an example of one of these, dated 1953, which were (as I understand it) issued in concert with new timetables, but only whenever revisions were made.

Looking through lots of these for SP Pacific Lines divisions, my conclusion is that although a number of SP branches were indeed operated under yard limits, most were not, including some pretty long ones and a few rather short ones. (For example, the Kentucky House, Friant, Schellville, Oakdale and Ione branches, all quite long, were not in yard limits.) But although yard limits for each subdivision are spelled out in the Special Instructions only, they are always visible also in the timetable. Here is an example from Coast Division, the San Bruno Branch. 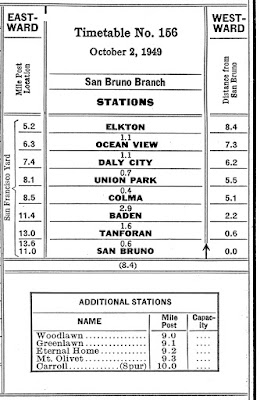 This branch left the main line essentially at San Francisco Yard (usually called Bayshore) and was entirely in yard limits; note along the left edge of the timetable that the yard limits are shown.
Some well-known and busy branches were also operated under yard limits, such as the Arvin Branch. Like San Bruno, it was very near a major yard (Bakersfield), and here is its timetable listing. 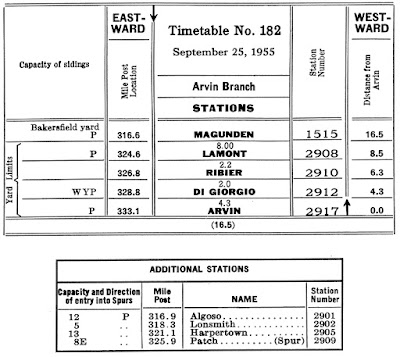 Here again, the extreme left edge of the timetable shows the extent of yard limits.
So anyone with access to an employee timetable can readily determine which, if any, branches on a particular division were operated under yard limit rules, in the way shown above. But the Special Instructions also indicate all yard limits on each subdivision, under a Rule 93 heading. For the Guadalupe Subdivision of Coast Division, within which my layout is situated, here is the listing:

Note that the Lompoc Branch is listed, but that only 0.35 miles of the branch beyond its mainline junction at Surf is indicated. This of course permits switching at Surf and use of the branch switch, without entering the branch outside yard limit rules.
I conclude that my mythical Santa Rosalia Branch would likely not have been operated under yard limit rules, and train orders and clearances need to be issued to branchline trains for authority to operate. I do have SP-origin forms for both clearance cards and for train orders (see my description at: https://modelingthesp.blogspot.com/2012/09/modeling-sp-train-orders.html ), so am ready to proceed.
Tony Thompson
Posted by Tony Thompson at 12:13 PM