Putting my Track 7 into service

The last segment of track to be put into service on my layout is the “back track” in my layout town of Ballard, labeled in maps as Track 7. It has been some time since I showed a map of Ballard as it now is, so I include one below. I should mention that this track plan was derived with little change from a town on Terry Walsh’s layout, as I described in a post last year (that can be found at: https://modelingthesp.blogspot.com/2018/06/my-ballard-track-arrangement.html ). You can click on the image to enlarge it if you wish. 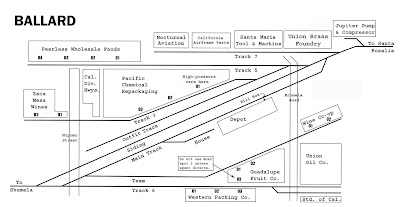 Track 7 is the uppermost track in this map, and has four industries along it.
The first step in being able to use this track was to power the turnout that leads to it, because the turnout is not readily accessible for a hand-throw device (I showed the installation of the necessary switch machine earlier, at: https://modelingthesp.blogspot.com/2019/02/powering-turnouts.html ).
With that switch machine installed and working, I proceeded to get the track spiked down and electrical feeders installed. I then prepared a first segment of this track for service, reaching to the nearest industry on the track. I showed that feature in a post about a recent operating session (see that post at: https://modelingthesp.blogspot.com/2019/02/a-dress-rehearsal-op-session.html ).
What the photo in the post just cited did not show was that most of the Code 70 track remained un-leveled and unballasted. A slightly different photo angle makes this obvious: 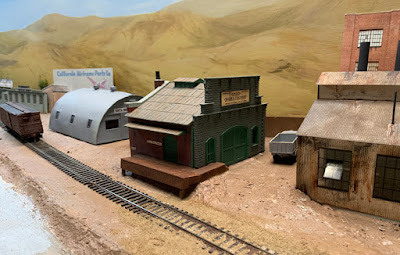 The large facility of Jupiter Pump and Compressor is at right, with the brass foundry in the center, and Santa Maria Tool & Machine is in the Quonset hut beyond it (modified from a Tru-Scale kit!).
An immediate need was to level the track over a somewhat uneven landscape beneath it, and get it ballasted. I usually use scrap ties under whichever edge is low, and can quickly and easily file down the thickness of such a tie to get the right height. A small spirit level is essential here. Once the track is level across the rails, even if somewhat undulating along its length (it’s an industrial spur, after all), I apply some matte medium to the spacers to help glue them down before ballasting.
The track shown above, ballasted only as far as the foundry, next had its leveling completed for the full length, and then was ballasted to the end. Here is a view in the spirit of the one above, looking along the track, past the Quonset hut. In the middle distance is California Airframe Parts, in the form of a flat that I described a few years back, taken from an actual building near the Oakland Airport (that post is here: https://modelingthesp.blogspot.com/2014/07/making-building-flat-from-prototype.html ). 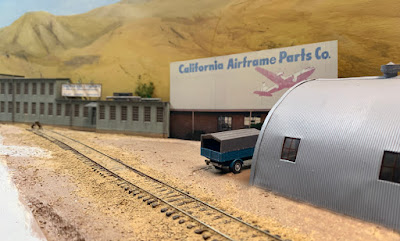 A track bumper was installed at the end of track (just visible above), using an Alexander Scale Models #511 Hayes bumper, before completing the ballast.
The view above has an angle that may be misleading. Below is a more overhead perspective, though this particular view is not available from the layout aisle without something to stand on. The greenish-gray building at left is the kitbashed “semi-flat” that I constructed when my layout was in Pittsburgh, and I described my approach to its construction in a post some years ago (you can read it at: https://modelingthesp.blogspot.com/2013/03/kitbashing-background-structure.html ). 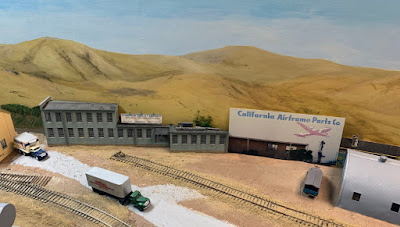 You can see that there is a stub of pavement extending off the main road (Bromela Road), and this stub will be extended across the track. The road surface will have to be adjusted so the road crosses the track at grade (at the moment the track is well above the road), but that’s a subject beyond getting this track into service.
I am pleased to finally be able to use my Track 7 and to be able to switch its industries. Several of the structures need loading docks, and obviously the area is unscenicked outside of the track, but those are separate topics. For now, I am enjoying being able to operate on this part of the layout.
Tony Thompson
Posted by Tony Thompson at 12:07 PM