In earlier posts, I have talked about various layout improvements I have been making, large and small. The present post is about a couple of small ones, though I am happy to have them completed.
One small project I developed was tie piles and rail racks, following SP company drawings for same (my post about completing my modeling is here: https://modelingthesp.blogspot.com/2018/12/tie-piles-and-rail-racks-modeling.html ; that post also has a link to the original post with prototype information on the subject). Here’s an additional rail rack, alongside the “outfit track” (as SP called tracks used for work equipment), along with a pile of ties. 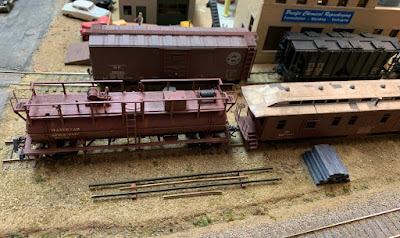 That’s an Albrae Models SP water car just above the rail rack. These models were imported in the light gray color SP used for maintenance equipment after 1959, but since I model 1953, I repainted it boxcar red and relettered. I commented on the model and its prototypes in an earlier post (it’s at: https://modelingthesp.blogspot.com/2018/04/a-southern-pacific-fire-service-car.html ).
I also built and installed some facilities for track cars, such as speeders, to get off the rails (SP called these “turnouts”), and there too, I used prototype drawings to design and build them. (My post about the modeling is here: https://modelingthesp.blogspot.com/2019/01/track-car-turnouts-part-4-installation.html ., and that post has the link to the prototype drawings too.)  One turnout not shown earlier is just outside the mainline tunnel on my layout (a common location for these turnouts on the prototype, for obvious reasons). Here it is, with the tunnel just out of view at right: 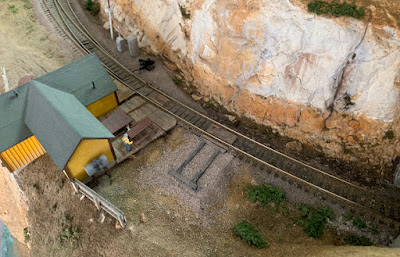 One more change that I think helps appearances is the extension of the drapes that hang under the layout, below the fascia. I have expressed earlier my belief that black is the best color for drapes, because of the theatrical truism that black is invisible (if you’re interested you can find that post at: https://modelingthesp.blogspot.com/2018/07/thoughts-on-black.html ).
Using the black layout drapes from when the layout was in Pittsburgh, PA had not covered all the areas I wanted to cover in the present layout, though I had additional old drape sections not needed in the current size of my layout. My wife was kind enough to lengthen the drapes in use, with the material from the old drapes. I already showed in a previous post that one end of my draped area was extended to cover a wide area (here is a link to that description: https://modelingthesp.blogspot.com/2018/09/additional-layout-improvements.html ).
I also wanted to deal with the area under my layout town of Shumala. The photo below shows the area with the old drape. Note that it ends before the end of the fascia at right (and note how the black simply reads as emptiness). Not obvious is that there is a large opening into the area beneath the layout, between the bookshelves and the fascia, and this of course permits viewing the various kinds of “stuff” stored under there. I would prefer to conceal that opening. 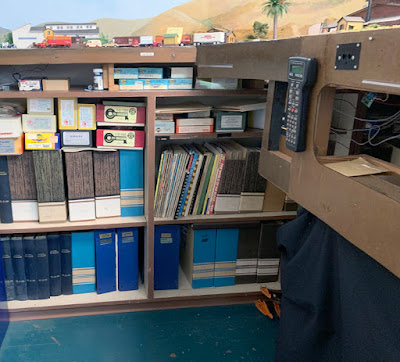 With the drape extension completed, not only was some of the shelving covered, along with that opening into the sub-layout area, but the drape now formed a continuous line around past the end of the fascia, as I had wanted. I think this is a distinctly more finished look. 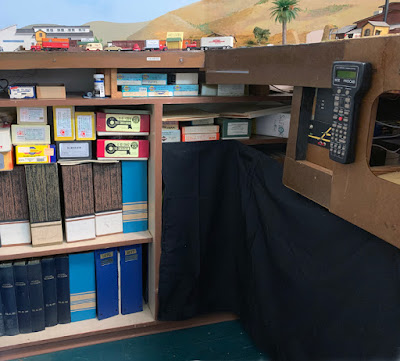 These small embellishments to the layout are welcome, and show the value of pursuing small  project along with big ones. I try to keep an open mind whenever I take as step back to evaluate the layout, and see if there are more of these improvements that can be done.
Tony Thompson
Posted by Tony Thompson at 12:28 PM