I have written a number of posts for this blog about the use of HO scale human figures on the layout, and this one is part of that series. You can readily find the previous ones by using "Figures" as a search term in the search box at right. The previous post in the series, number 8, can be found here: https://modelingthesp.blogspot.com/2017/09/fijgures-and-layout-details-part-8.html .
The present post is about completing an idea I initially had many years ago, when my current layout was part of a larger layout in Pittsburgh. When I built the town area of Shumala (then called Jalama), I included a plaster rock casting representing a cliff toward the right edge of town. It’s just barely visible in many photos of the area, such as the one below. The cliff is between the billboard and the tower at right. 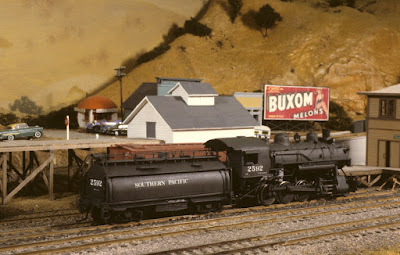 The view above doesn’t show it too clearly, though it represents the familiar background of that part of the layout. Here is another view of the cliff, near the tunnel entrance where the Santa Rosalia Branch leaves Shumala and heads for Ballard. The cliff is just to the right of the tree. 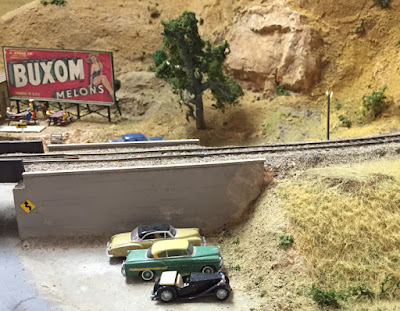 The reason I included this somewhat sheer cliff face, though a hillside would have been fine, is that in those days I was just about at the end of many years as a rock climber, and wanted to add HO scale climbers to this cliff. Preiser then made a set — their number 190 — of people climbing (the set can still be found on eBay), and I bought one back in the day. By the way, don’t confuse this set with another Preiser set that contains 190 unpainted figures, a coincidental matching of numbers.
I should mention that in much of the 20th century, traditional garb for rock climbing (and mountaineering) in ordinary weather was knickers, as seen in the image below. This is me, in the Matterhorn area of Switzerland, more than 40 years ago. 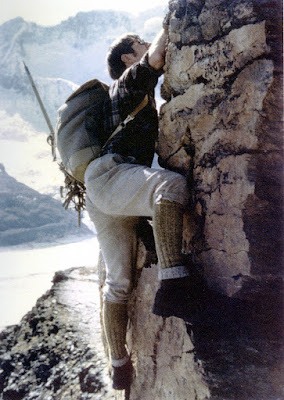 The corduroy knickers I’m wearing in this photo, and the long wool socks, served me for a number of years climbing. This clothing gives far more freedom of leg movement than long pants, and is quite warm.
Happily the Preiser set represents its mountain climbers as wearing knickers, so I was delighted to retrieve that set from my stash and begin installing some of the figures. After experimenting with a variety of arrangements, I attached the figures with canopy glue. Here is what I ended up with (you can click on the image to enlarge it if you wish). 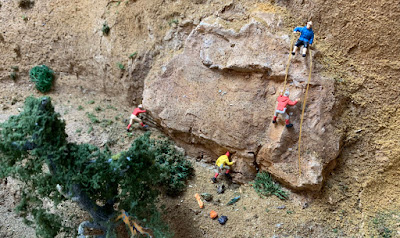 The scene represents short-route or “practice” climbing, in which one climber reaches the top of the climbing route (or routes), secures himself to the rock, and then belays successive climbers as they make their way up each route. Climbing a single pitch or rope-length like this is often called “top roping” for obvious reasons. You can see that the rope from the climber is around the waist of the belayer at the top, as would normally be done. As the climber ascends, the belayer passes the rope continually around his back, and as in this case, may simply let it trail down the cliff.
Around the base of the rock, climbers waiting their turn for the route up the “inside corner” that is being belayed, are “bouldering,” meaning trying out a few moves unroped, without getting far enough off the ground to risk injury in a fall. An additional coil of rope and some backpacks are also on the ground; these come in the Preiser set.
It was fun to finally complete this small climbing scene, and to revisit a few memories of my own days as a rock climber.
Tony Thompson
Posted by Tony Thompson at 10:55 AM