In a number of posts over the years, I have described a variety of loads for open-top cars. I find these not only interesting, but a great way to vary what particular freight cars are doing in an operating session. Of course the range of topics is broad, and you can find a lot of the prior posts by using the search box at the top right of this page, with the search term “open car loads.” In the present post, I want to explore an additional type of load, structural steel.
In the steel business, “structural” refers to specific shapes, such as channels, I-beams, H-beams, and so on. There are lots of “other” shapes, but the term “structural” is restricted to the widely used ones. These are typically hot-rolled shapes, and often are cold-straightened before shipping, as the shapes emerging from the hot mill often bend or warp as they are completed. From numerous trips to steel mills when I lived in Pittsburgh, I know well what these processes and products look like.
I mention the straightening process because of how the steel looks when finished. Plate steel and some shapes are usually shipped as-hot rolled, and will then be coated with what is called “mill scale,” essentially iron oxide in a medium gray color that formed while the steel was hot. This is a familiar appearance around a steel mill. But when steel is cold-rolled, cold-finished, or straightened, the brittle mill scale breaks off and a typically dark metal color is left. This is not the “shiny silver” look of cleaned or polished metal, but a much darker color. I wanted to model some structural steel with this color.
I should mention that if steel is stored awhile out in the weather, it certainly begins to show rust, so rusty steel loads are perfectly appropriate. And sometimes the steel will have received a coat of primer or paint, often red lead or equivalent, especially if the steel has been fabricated to size and is ready to install. So there are actually several colors that might be observed for steel loads.
Just as illustration of what I wanted to do, there is an apartment building starting construction near me, and when I walked past the site the other day, they had a couple of large steel I-beams delivered. This is what they look like, a good example of the very dark gray type of appearance. (You can click on the image to enlarge it if you like.)

I decided to choose a new shape of material to make some new steel loads. One nice option for gondola loads is the excellent I-beams offered by Evergreen. I like the bigger examples, like their part no. 278, characterized as a 5/16-inch beam, which in HO scale is about 27 inches deep. A few lengths of this shape in a car amount to a reasonable load. How reasonable? One classification widely used for beams like this is the W (for wide-flange) series. The Evergreen 27-inch beam has about a 12-inch flange, making it approximately a W27-130 beam, meaning it would weigh 130 pounds per linear foot.
This means that a scale 40-foot length, say, would weigh 5200 pounds. Three such lengths would weigh 15,600 pounds, and six of them would weigh 31,200 pounds. These are all readily accommodated in a 50-ton freight car.
I mention these weights because the Evergreen no. 278 package of two (actual) 14-inch I-beams then contains about 31,000 pounds of steel in HO scale. Use more packages if you want a bigger load, but several packages might be too much.
I began by cutting an Evergreen beam into three lengths to fit into a 40-foot car, not exactly equal length since structural steel is often not cut to final length at the mill. I painted them with a Tamiya color, “Gun Metal” (TS-38). Yes, this is a rattle can, but as I’ve pointed our before (see the post at: https://modelingthesp.blogspot.com/2018/08/a-shout-out-for-tamiya-products.html ), Tamiya provides a good spray nozzle that behaves very well.
The Gun Metal finish is fairly glossy, so a coat of Tamiya “Flat Clear” (TS-80), an excellently flat finish, was applied. Then I gave the beams a wash of rusty mixed colors (mostly acrylic Burnt Sienna) to get toward the look seen in the photo at the top of the present post. They looked like this (you can click on the image to enlarge).

Note the reasonably realistic cross-section of these beams, compared to the very heavy section of the Plastruct beams often used by modelers for loads like this.
Structural shapes like this were sometimes loaded into gondolas just outside the mill where they were rolled, but in some cases the rail cars were moved right inside the rolling mill for loading. An example is below, from the National Tube Works plant (part of U.S. Steel) in Lorain, Ohio, and it shows a string of gondolas along the right-hand wall. (The photo is from the Cleveland Press photo collection at Cleveland State University, which can be accessed at: http://images.ulib.csuohio.edu/cdm/search/searchterm/National%20tube%20company/field/all/mode/exact/conn/and/order/nosort .) 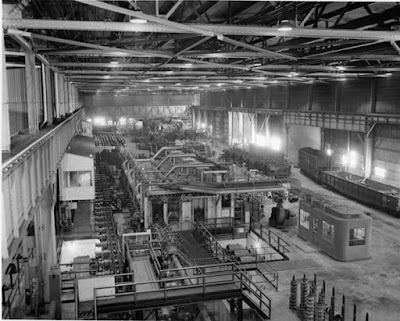 My model use of the steel beams employs them as a removable load. The beams simply rest on some pieces of stripwood to represent cross-timber supports. Here is one example of the load in use, shown here with a 40-foot SP GS gondola (actually an old Ulrich die-cast model with some modern details). 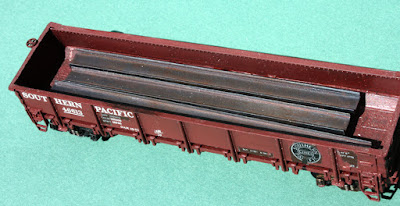 A second load was made by cutting longer lengths of the Evergreen I-beam, painting them the same way, but adding rust effects with Pan-Pastel “Burnt Sienna” instead of the acrylic wash. I felt that this too worked well. The effect is a little more of an overall tinge of rust, rather than the noticeable gathering of pigment in the flange-web corners as occurs with the wash. That is, by the way, a natural behavior of a wash.

The 52'-6" P&LE gondola is from a LifeLike Proto2000 kit.
This load adds to my repertory of open-car loads, which I like to be able to vary at will, and also provides one of the really common types of loads that are carried by rail. It will find regular use in my operating sessions, and I will probably make a “sibling” load or two, to include more of these very nice beams.
Tony Thompson
Posted by Tony Thompson at 10:40 AM