I have been completing this gas station, modified from a City Classics kit, over a rather leisurely schedule in recent months, and it is finally done. I will show final steps in the present post. Previous posts, starting with the most recent (you can access it at this link: https://modelingthesp.blogspot.com/2019/03/union-oil-gas-station-part-5.html ) can be found by using “Union Oil” as the search term in the search box at right.
I showed in the previous post the details added to the front of the station building, but after testing it on the layout, decided to modify it a little. I moved the large display of motor oil cans from the pump island to the front of the building, moving the tire display to make room. I then added one of the delightful items included in the kit, the familiar “Bear Service” sign, for alignment and steering maintenance. You can see all this below (feel free to click on the image to enlarge it, if you wish). 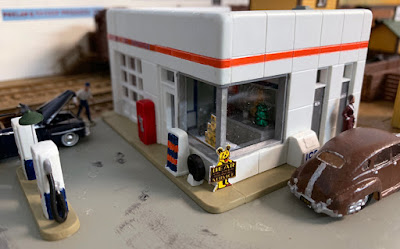 The 1946 Pontiac at right is from a resin kit.
Next I decided to complete the large free-standing sign included in the kit, to make the station visible to passing motorists. This could go at the street corner on my layout. That in turn immediately suggested something else to me, that I could add a street sign to the corner. I build my street signs of scale 4 x 4-inch styrene, and simply add street names. Here the foreground street is Pismo Dunes Road. 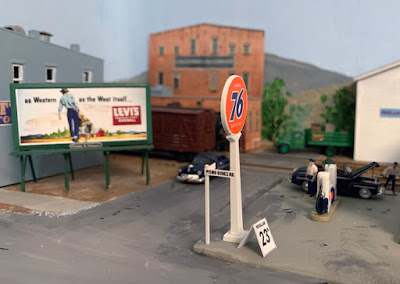 Notice also the gas price advertising sign, provided in the kit, and as it turns out, almost exactly the price of regular gas in California in 1953. In the background is one of my interchangeable billboards, this one with a period Levi’s ad. I described my billboard methods in an earlier post (you can see it at: https://modelingthesp.blogspot.com/2015/04/interchangeable-billboards.html ).
With those elements in place, I put together the whole scene, adding some automobiles and people (including the Union Oil attendants in white shirts and dark blue pants and hats). Here is how it looks from a low angle. 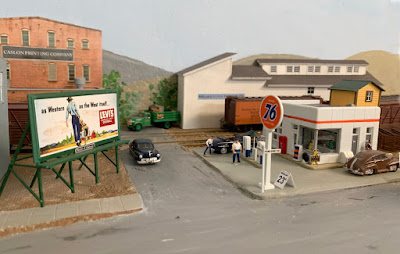 The white building in the right background is the Phelan and Taylor packing house, made from a Showcase Miniatures kit.
Of course, most visitors don’t see the station from such a low angle, but instead see it from more of an overhead perspective. To illustrate how it looks that way, here is another photo. This is certainly a minimal footprint for a gas station. At lower right is the water tank structure serving the adjacent stock pen. 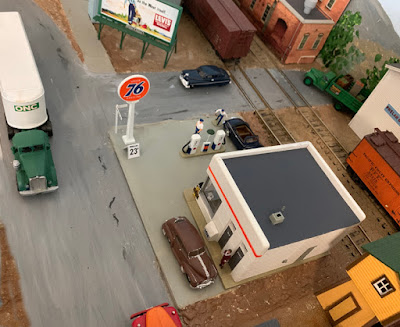 I was happy to fill this street corner with a gas station, among the most mundane and commonplace of American businesses, and therefore perfect to be present at a street corner. The only thing I regret not adding is a canopy over the pumps. Such canopies began to be added to older stations, and invariably built for new stations, during the 1950s, so it was desirable, but would have the drawback that it would hide everything under it. I reluctantly chose not to add a canopy.
To see how nice it would look if one were added, I show below (with permission) a photo of an N-scale Union station, built by Diane Wolfgram for her layout, and this station really shouts Union 76. I love this canopy. Ah well, another example of choices that have to be made. 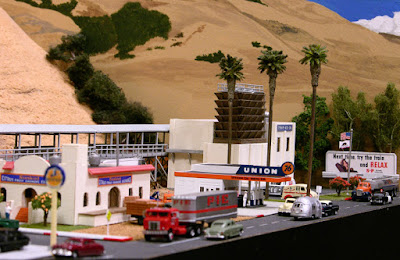 Before closing, I should offer kudos to City Classics and its proprietor, Jim Sacco, whom I’ve known since the days I lived in Pittsburgh, more than 25 years ago. It’s a terrific kit, and I have enjoyed working my way through all the options of how to complete it.
Tony Thompson
Posted by Tony Thompson at 10:13 AM