I have been posting a series of descriptions of my work in modifying and detailing the excellent City Classics kit for a “Moderne” gas station. These were clad with enameled steel panels, so sometimes called the “icebox” style. The most recent post, in which I completed the interior of the station office, can be found at this link: https://modelingthesp.blogspot.com/2019/02/union-oil-gas-station-part-4.html . Having applied the dark gray roof without cement, and having added some details from the kit to the outside of the building, I wanted to try a test fit to my concrete pad with driveways, as I described earlier (see: http://modelingthesp.blogspot.com/2018/09/union-oil-gas-station-part-3.html ). 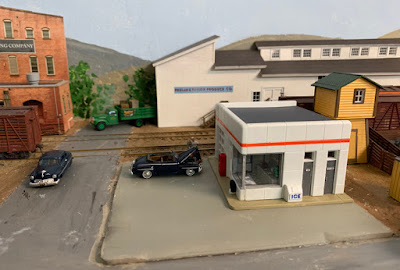 The location here is at the corner of Pismo Dunes Road and Alder Street in my town of Shumala.
In the photo above, the island with gas pumps is obviously missing, as is major signage identifying the station as Union 76. My first challenge was the gas pumps. These are provided in the kit as matching halves, which are cemented together and the seam cleaned up. Next comes the challenge of adding gas hoses. Slender black wire is provided in the kit for hoses, but I was disappointed in my ability to get it to assume a relaxed loop of a hose not in use. I decided to use No. 24 wire with black insulation, though this is probably too thick for 1950s hose, and No. 26 or 28 might be better.
I began by drilling oversize holes at the top hose connection, and at the bottom where the nozzle would be. I used a No. 70 drill, which made it easy later to fit the hose pieces. I drilled a very short distance into the pump body perpendicular to the surface, then changed the drill angle and drilled upwards at about 30 degrees to the surface. I then cut some lengths of wire and experimented to get the hose shape I wanted.
Next I painted the pump bodies dark blue partway up each side, in accord with Union Oil practice in this era (see a color photo example in my first post in this series: http://modelingthesp.blogspot.com/2015/12/modeling-gas-station.html ). A detail of this photo is repeated below to show the goal. 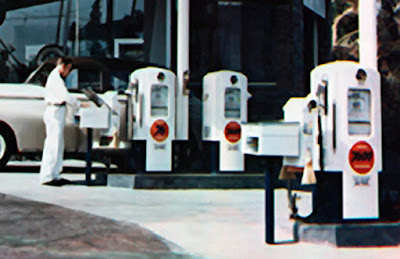 I also painted the hose attachment parts of the gas pump a silver color. The painting was followed by gluing on the “meter” faces for the pumps, supplied in the kit, using canopy glue, and also adding small “76” emblems as can be seen in the image above. Finally, the formed hoses were attached with canopy glue. Here is the result. The hoses look oversize here, but are less evident in the completed model.

This permitted me to proceed with the gas pump island. For the light support, I used brass rod instead of the styrene rod supplied in the kit, painted it white, and installed it and the light shade, and painted the base “aged concrete” and the light shade dark green. Along with the stand holding cans of oil, painted in Union orange or blue, it looked like this:

I also added a “Union Oil Service” legend, lifted directly from an on-line photo of a Union station, and glued it in place on the orange stripe of my station building. Note also the soft drink machine and the displayed tire, plus a stack of canned products in the office window. (You can click on the image to enlarge it if you wish.)

Progress is good on this project, and I should be able to wrap it up with just a little more work. I can then people the scene, add vehicles, and of course a major sign with the “76” logo. I will report on that in a concluding post.
Tony Thompson
Posted by Tony Thompson at 3:03 PM