This series of posts is about modifying a City Classics kit for a service station to fit my layout and to serve as a Union 76 gas station of the 1950s. The preceding post, Part 3, was about assembling the station building and preparing a pad for it with appropriate driveways from street level (it can be found at this link: http://modelingthesp.blogspot.com/2018/09/union-oil-gas-station-part-3.html ). Links to the first two posts on this topic can also be found in that Part 3 post.
In the previous post, I showed the assembled building without rear wall or roof. But the important part about the building at that point is that I had kitbashed it to be smaller and fit better into the space on my layout. (See the post about the changes at: http://modelingthesp.blogspot.com/2018/08/union-oil-gas-station-part-2.html ). That means that not only the rear wall, but also the roof provided in the kit would need to be modified for the smaller building. I went ahead and did those modifications. Shown below is the building (complete with Union 76 orange stripe) and roof piece. The roof is obviously unpainted, and not glued on at this point, as the window glazing and interior need to be added.

You will notice here that I painted the frame of the office windows light gray, to suggest an aluminum window frame. I also painted the restroom doors dark gray, as I recall that being the case at Union stations back in the day.
At this point, I returned to the kit directions to make sure that I did everything that needed to be done before gluing the roof. As I mentioned, the directions recommend adding the window glazing and also the printed interior walls and floor for the office area in the station front corner.
I began by attaching rectangles of clear styrene provided in the kit, at each window opening, using canopy glue. (this is a great adhesive for this application, because it sticks really well, doesn’t attack styrene, and dries clear. (For further comments about the value of canopy glue, see my prior post at: https://modelingthesp.blogspot.com/2013/05/a-few-words-in-praise-of-canopy-glue.html .) I then attached the printed floor with canopy glue also. Here is the floor in place. Note that I have not yet cemented the building to its base. 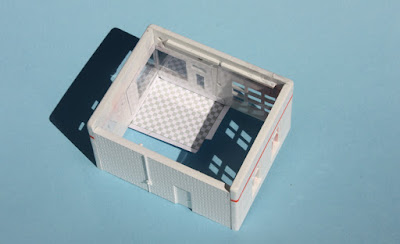 Because my gas station will be fairly near the edge of the layout, and accordingly visitors will be able to see into the station office through the large windows, I decided to add a counter to the back wall inside. This is just folded paper, with the original counter front moved outward.

When the interior walls were added, I also placed a desk by the front window.Then I added small rectangles of paper on the surfaces, and a few miscellaneous objects, just so that there were “things” in view. I also added some color to the back wall.

Next the module shown above was glued into the building, using the flaps that you can see at each edge, using canopy glue. This completed the interior work I wanted to do.
At this point, I was beginning to think about the personnel that I could model at this service station. Like most oil companies in the early 1950s, Union Oil had a standard uniform for attendants. Certainly in an earlier era, this uniform for Union Oil had been all white, pants and shirt. They had nicknamed it “Minute Man Service,” and here is an example of a sign publicizing it. (internet photo) 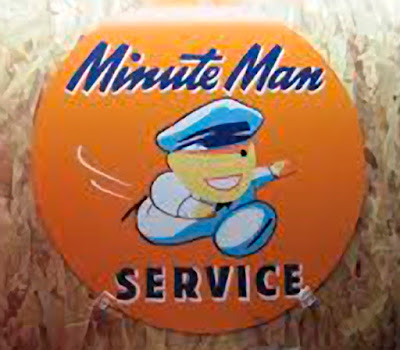 Later in the 1950s, there was a change to dark blue pants with the white shirt, and I don’t know when this change was made. But here is a 1959 sign showing this changed uniform. The hat has changed also. I think the blue pants looks good, and will adopt that for my service station personnel, though as I said, I am not sure the change had been made by 1953. (internet photo) 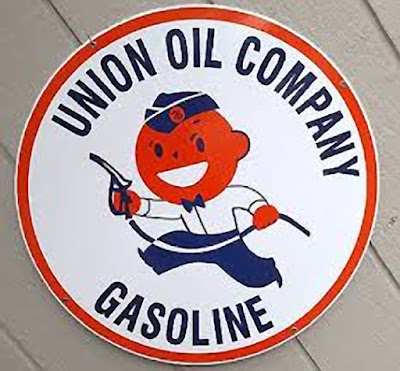 Next in line for the detailing of this gas station is the gas pump island and some of the other details provided by City Classics in this kit. I will address those in a following post.
Tony Thompson
Posted by Tony Thompson at 10:40 AM