I have from time to time in this  blog posted commentary about wine, both as an industrial commodity that was shipped by rail (see that post at: https://modelingthesp.blogspot.com/2012/02/wine-as-industrial-commodity.html ) and also several posts about wine tank cars. (The latter are most easily found by using the search box at right with “wine” or “wine tank cars” as search terms.)
In the present post I want to report about my restoration of an ancient Laconia Industries HO scale car kit, decorated for Chateau Martin wines (incidentally, pronounced “mar-tinn” instead of “mar-teen”).
(I have mentioned the background of Chateau Martin before, including mention in the blog post cited in the previous paragraph. To summarize, the Chateau Martin company, owned by Eastern Wine Corporation of New York, shipped bulk wines from California to be bottled in the Bronx. For much more on Chateau Martin, I highly recommend the web page Jim Lancaster has put together. Here’s a link, if you haven’t already seen Jim’s compilation: http://coastdaylight.com/chatmart/cmwx_roster_1.html .)
The Chateau Martin cars, painted a vivid burgundy color, are extensively pictured on Jim’s page, but here’s a photo he doesn’t include, by Morris Abowitz at Los Angeles in 1964, from the Bill Sheehan collection:

These cars contained internal tanks and thus were classified as tank cars despite their external appearance; the Chateau Martin former express reefers became AAR Class BMT. Such cars were not refrigerated — they were essentially insulated tank cars — and had no ice hatches.
With that background, let’s return to the Laconia Industries kit, with its correctly-colored sides. The “Laconia” name is interesting. There was in fact a Laconia Car Company, located in Laconia, New Hampshire, building prototype railroad cars, in the years from 1848 to 1928. In 1939, ads announced a new Laconia Industries HO scale model manufacturer, whose kit designer was the last car designer at the Laconia Car Company!
In 1951, the company moved to Stockton, California. In 1955, it merged with Binkley Models of Inglewood, California, though the two lines each continued to be offered under its own name. In 1962 both went out of business.
Laconia Industries was probably best known for their foil-printed car sides, with full color paint schemes lithographed onto foil,which was in turn bonded to cardboard car sides. Most of the cars so treated were billboard reefers of the pre-1934 variety, but there were a few exceptions. This Chateau Martin car is one of them, since it represents a paint scheme that ran into the 1970s. Shown below is an Internet photo of a Laconia kit box from the days they were in Stockton. Different kits had different box colors. 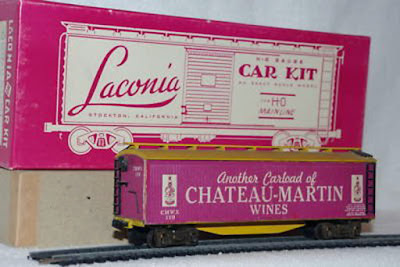 This car kit dates from the 1950s at the latest, and though upgrading details on old models can be nice, I think a case can be made for leaving a car like this as much in original arrangement as possible. That meant I would only be correcting a few of the coarser details of the model. But one defect was glaringly obvious. The car corners showed that the car sides and ends did not meet cleanly. I don’t know what the original kit directions intended to be done here, only that the model as I received it isn’t okay. 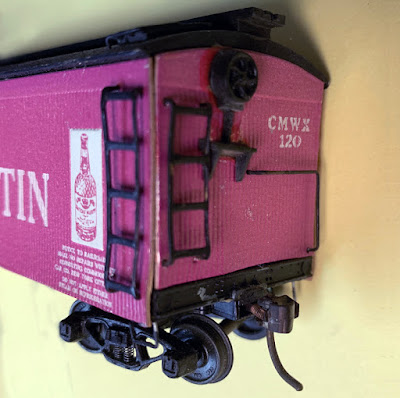 One option occurred to me right away. I could place a square strip, perhaps of styrene, right in that corner to fill the gap, and make it look far better. But then I would have to match the paint color. And if I could match the paint color, that would also permit touching up a few spots where the color on the foil had been nicked. So I tried to see if I could find a match.
The color of this model is always called “magenta,” and it certainly does look like that color.  So a first cut at matching would be to find a paint that is in fact called magenta. As it happens, there is an acrylic point  from Acrylicos Vallejo or AV (for more on these paints see my comments at: https://modelingthesp.blogspot.com/2019/02/using-vallejo-paints.html ), their no. 70.945 in the Model Color series, that is called “magenta.” And it actually does match pretty well. This is to some extent luck, of course, but it works out in this case.
With ability to match the paint, I decided to place the styrene strips to fill the car corners. What would fit in each of my corners was a scale 2 x 2-inch Evergreen strip, and I attached it with canopy glue. Most of these corners were nicely filled with this styrene strip, though one of them required some sanding of the strip before installing it. Here is the car at this point. 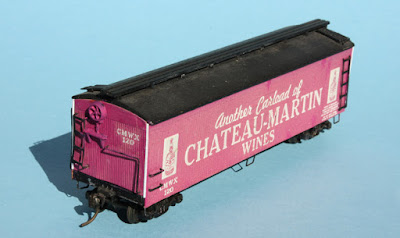 Then I brush-painted those corners, and the result is below. You can see that there is some magenta overpaint onto areas of the black hardware, from painting the corners, but it was easy to touch up those errors with black when painting was done.

I also want to add some streaking of dirt onto the roof, but will leave the sides as they are. The fading with age of the Laconia kit sides is probably realistic, and the car can start serving on my layout in that form.
Many older models in HO scale look fairly crude by today’s standards, but some of them have qualities that still look good. In my opinion, this is one of them, and I will enjoy seeing this car in service on my layout.
Tony Thompson