I have a general standard as to how turnouts are thrown on my layout. I want them to be hand-thrown wherever possible. Most of my layout is a branch line, and certainly turnouts on such trackage were hand-thrown on the prototype. Even switches on the segment of the Coast Division main line that I model would have been hand-thrown in my modeling year of 1953.
But sometimes one may not wish to use a “standard” hobby ground throw. I have mentioned previously that I dislike the immense and out-of-scale size of Caboose Industries ground throws, and have replaced them with Bitter Creek ground throws wherever possible. (see for example my post at: https://modelingthesp.blogspot.com/2017/03/choosing-ground-throws.html ). But there are still times when I don’t want visitors to have to reach too far into the layout to throw a switch.
I haven’t described it anywhere in this blog (and perhaps I should), but I have built rodding for two mechanically operated turnouts, engaged by push-pull handles at the layout fascia. This approach works well when you  have a straight line, perpendicular to the track, that reaches the layout edge. Here is how that fascia area looks: 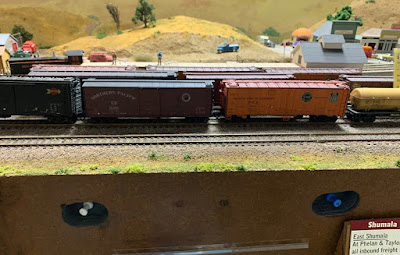 The two push-pins you see are the handles for push-pull controls for turnouts in the back part of this area of the layout. They are recessed into the fascia so as not to be accidentally bumped or bent.
But sometimes layout geometry can fight you on this idea. That is my situation at the part of my layout where the town of Ballard transitions to Santa Rosalia, and track makes a 90-degree bend. Rigging manual throws such as shown above in that inside corner really is not workable; operating rods all converge in one area. Moreover, there is limited clearance under parts of that area, due to staging and other things beneath.
Those problems rule out the very nice Blue Point device, marketed by A-Line, which is an excellent design but a little too big for this location. And as I mentioned, the layout geometry at this corner works against a straight-line manual operating rod.
Originally in this area, I decided to use some old twin-coil switch machines that I had retained from my layout in Pittsburgh, back in the 1990s. In a previous post, I showed how I concealed one such machine (see it at: https://modelingthesp.blogspot.com/2015/05/constructing-section-buildings-part-2.html ). The Kemtron machine I installed was old when I installed it in Pittsburgh, and by now it was really old.
These twin-coil switch machines are totally reliable in my experience, and the power routing they provide with their auxiliary contacts is effective. But they do throw with a loud “clack,” and the switch throws very fast. Not really the best combination of characteristics.
Stall-motor switch machines have been around for decades. I successfully used an Electroplumbing machine from American Switch & Signal on my layout in Pittsburgh. More recently the Tortoise machine (produced and sold by Circuitron) has become almost ubiquitous on North American layouts. But the Tortoise is a pretty big device, and wouldn’t fit under the layout area in question.
I decided to try some of the newer servo-type switch motors, like the ones sold by Model Railroad Control Systems. (See their product description at: http://www.modelrailroadcontrolsystems.com/mp1-version-2-switch-motor/ which includes ordering capability, and, if you like, view also the manufacturer’s product brochure [made by a company called MTB in the Czech Republic] at: http://www.modelrailroadcontrolsystems.com/content/MP1%20brochure.pdf ). Here is what it looks like. The contacts in the green area are the wiring connections. The red part is the slider that moves the throw bar of the turnout. The whole device is only 1.5 inches square and less than 3/4-inch tall. 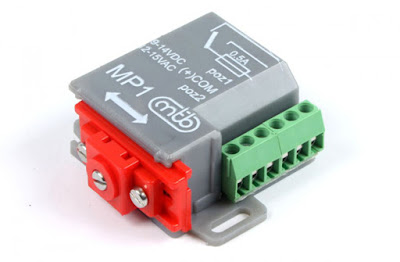 This machine is not a stall motor, but has limit switches that turn off the motor when a preset movement limit is reached. You can choose the amount of throw; I found the 3 mm setting to work fine on HO scale turnouts.
I installed one of these motors right where the Kemtron twin-coil used to be. Here is a view of it in place, with both the power wires for the motor, and the auxiliary wiring for track power to the frog, all installed. I have a simple SPDT switch to control this motor. 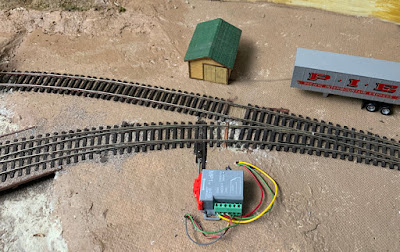 The wiring coming from two sides is derived from the locations of connections to the prior twin-coil machine and are not optimum for the MP1, but they work. And by the way, this machine doesn’t have to be surface mounted; it works equally well mounted under the layout. This one just happens to be in an area where under-layout mounting would be a challenge.
The switch motor, of course, is not exposed like the above photo when the layout is being operated, but as was arranged for the twin-coil before it, resides inside a maintenance building: 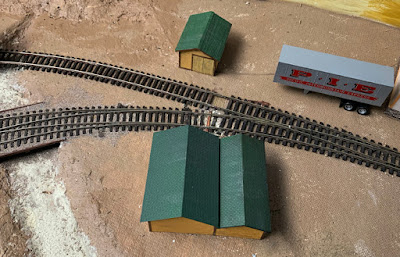 I will use this motor as part of an upcoming operating session, and will see how it performs. But in my own testing, it seems fine, and its advantages of small size, easy surface mounting, and convenient wiring connections seem good to me.
Tony Thompson
Posted by Tony Thompson at 10:06 AM