In my previous post on this topic, I described the construction of the main part of the building, but did not address the complexities of the roofs. (See: http://modelingthesp.blogspot.com/2014/03/constructing-section-buildings-part-1.html ). In this post, I describe completing the roofs.
Before continuing, I want to mention that there are very complete drawings for SP tool houses in Volume 2 of the series, Southern Pacific Lines Common Standard Plans (Steam Age Equipment Company, Dunsmuir, CA, 1993), as well as a few photos. Anyone desiring more detail, particularly in the interior, or other variations, can profitably examine these drawings.
Southern Pacific usually shingled the roofs of these kinds of section facilities, at least until the 1940s. Rolled (tarpaper-type) roofing was also seen in some instances, particularly as roofs were replaced. In the past, I have used Sylvan Products molded shingle roofing. Rix Products “Pikestuff” also makes a very nice styrene sheet of shingled roof material. From time to time, I have applied the individual rows of stick-on shingles, such as those produced by Campbell, but that method can leave far too much variation among shingles, and relief of individual shingles, to be realistic for even a rarely-maintained roof. That type of shingling has to be applied, in my opinion, only when you can weight shingled roof sections for a time to ensure everything sticks down tight.
To install the roofing material, I needed to complete the support structure for the roof. As I have done with other structures, I used the triangular off-cuts from cutting out the building ends, to re-combine into a segment with the identical roof pitch used on the building ends. I showed clear photographs of this process in my November, 2012 column in the on-line magazine Model Railroad Hobbyist or MRH. Like all MRH issues, that issue can be downloaded free at: http://model-railroad-hobbyist.com/magazine/mrh-2012-11-nov . (That column was about scratchbuilding an SP depot for my town of Shumala.)
I used the cross-beam at the open end of the large structure to support the triangular end pieces. Once the triangles were in place, I also added a center beam, which will be painted Colonial Yellow to act as the top of the structure side of the taller part of the building. 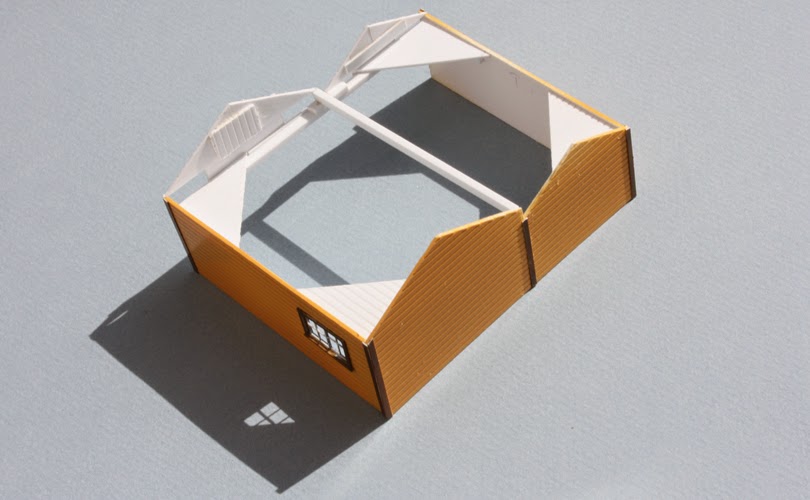 You may be wondering why one end of the structure has no wall. That will become clear below.
Next came roof sections. For the AL&W kit, shown in the first post on this topic, I could use the roof segments and shingles provided in the kit. For the scratchbuilt building, I simply cut rectangles from Rix “Pikestuff” no. 1007 styrene shingle roof material, duplicating the end and side overhang of the roof on the AL&W building (the overhangs are about a foot on both sides and ends).
With the Rix roof sections cut to size, I airbrushed them with the Tru-Color paint for the SP color, no. TCP-154, Moss Green. They were then attached with ordinary styrene cement, Meanwhile, the A&LW kit roof was also glued in place. Here are the completed buildings.

The roofs and walls have been lightly weathered in the view above.
Now for the reason that there is no end wall on my larger building. It is intended to cover a switch machine which had to be mounted on the layout surface, on account of inadequate space below it. Here you can see the installed machine. The background track leads to Jupiter Pump & Compressor. 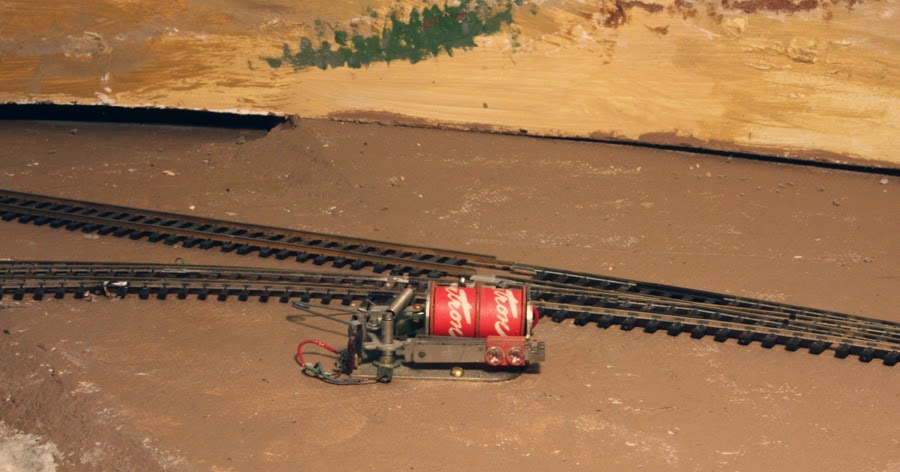 Yes, the twin-coil switch machine is really a Kemtron from some years ago. The building covering this machine should be an easy lift-off for maintenance purposes, and that’s how it was designed.
The building fits just as planned, and here is the same scene shown above, but with the new buildings in place. Ground cover obviously not yet applied. 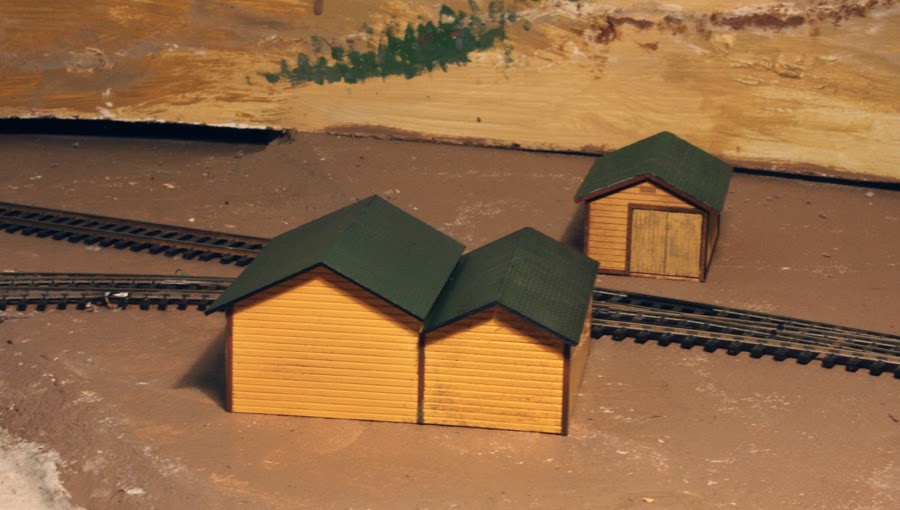 This was a simple project with a specific goal, hiding the switch machine, and it came out well from my perspective. And the structures were pretty easy to build using styrene.
Tony Thompson
Posted by Tony Thompson at 10:54 AM