Nearly all operating sessions I have hosted on my layout, here in Berkeley or when I lived in Pittsburgh, PA, were what you could call “private” sessions, where friends made up the crew. Some came when invited, several came as part of regular “work” nights in Pittsburgh. What I have rarely done was host a session where I did not choose the participants, that is, where people signed up for a chance at sessions, and were assigned to my layout by a third party. That happens as part of some conventions, as was the case here, with the just-concluded 2015 meeting of the Pacific Coast Region of NMRA.
All registrants for the convention were entitled to request operating sessions on any of the available layout they wished, and were asked to rank-order their requests, so that if a high choice was not available, another choice could be awarded. Some layouts are famous and everyone tends to request them, so a ranked list of preferences is an approach to try and apportion resources fairly.
My layout was listed as accommodating four operators per session, as two two-person crews, which is about all that can be kept busy on a layout the size of mine. The sessions were for three hours, 7 to 10 PM on both nights that we operated.
The scheme I designed for these sessions was to start one crew at Shumala with the newly-arrived cars off the SP Guadalupe local, and to carry out all local switching needed. The second crew began at Santa Rosalia, and switched there and at Ballard. As soon as the Ballard train was ready to return to Shumala with the cars it had picked up, I ran the Surf turn, passing by on its way back to San Luis Obispo, which picked up the outbound cars the Shumala crew had set out, and the turn also dropped off another batch of cars for the branch.
I will just show a few snapshots from the two sessions. Below you see Tom Crawford (left) and Stan Keiser working at Shumala at the beginning of the session on the first night. You’ll notice we were all wearing our convention badges on red lanyards. 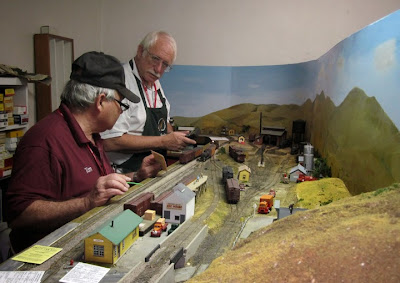 Meanwhile (below), once they finished at Santa Rosalia, Dave Connery (foreground) and Ed Merrin (partly hidden) switched at Ballard. I’m observing in the background. My job was to hang around and answer questions or try and solve problems, but to stay out of the way. 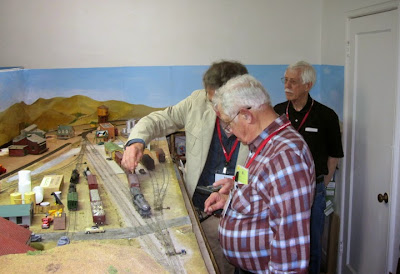 Then when all Ballard work was complete, the branch train returned to Shumala. Both nights, the crews elected to switch sides of the layout at this point, so that each crew got to switch all the towns. The former Shumala crew thus took all the Ballard-bound cars in their yard, and set off to Ballard, while the former Ballard crew did the additional switching at Shumala with the cars they had brought off the branch, and dealt with the new arrivals off the SP. Both nights, these two assignments combined to take about the full three hours to complete.
Here, in a scene from the second night, is the crew which started at Santa Rosalia, and is now working at Shumala, Jeff Allen at left and Steve Williams. 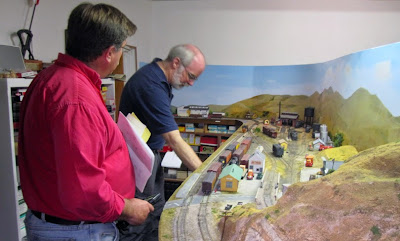 The operating scheme largely worked well, the crews pretty much understood the work directions and waybills, and rolling stock mostly behaved itself. Each crew probably moved on the order of 50 cars in each session. On the debit side, I still have a few electrical gremlins to slay. But because it was a completely different operating scenario from any previous operating session, it was an interesting challenge, and all in all, I was pleased with how well it went.
Tony Thompson
Posted by Tony Thompson at 12:27 PM