In the previous post, Part 3, I showed my trials of various ways to orient the street which intersects Pismo Dunes Road in East Shumala, to try and minimize visibility of the street heading straight into the backdrop (that post is at this link: http://modelingthesp.blogspot.com/2015/02/pismo-dunes-road-part-3-alder-street.html ).
As I reported in that last post, I decided to very slightly curve and taper Alder Street, and went ahead with that plan. Here is the street after the shoulders were faired in with paper mache.

Next I painted the shoulders and other unpainted or poorly painted areas with my standard dirt-undercoat acrylic color, Rust-Oleum “Nutmeg,” as I have shown in other posts. Just visible in the photo below is a small-radius fillet between the surface of Alder Street and the backdrop. (You can click to enlarge the image.) This helps hide the intersection of horizontal and vertical surfaces. Buildings have been removed in this view.

The dark road surface you see in the photos above only depicts the primer color I applied to the bare styrene. I went back and painted the road a lighter color, typical of asphalt which has been in service awhile (whenever I need a refresher on how this kind of roadway looks, I just walk out in front of my house and look at the street). I used acrylic tube colors, predominantly Neutral Gray, with a little Titanium White to lighten it a little.
The other thing needed in this scene is some suggestion that there are trees, bushes, or some kind of vegetation in the middle distance, so that the lowest angle view does not show the distant hills. I like to do this with acrylic tube paint, as I have shown in previous posts. Here is the revised scene, with the road a more nearly correct color, and various vegetation painted on the backdrop to show between the buildings and alongside Alder Street. Note also that I have cut off the bottom of the Caslon Printing Company flat and replaced the cut-off piece with a plain piece of foam core. As you can see in the top photo in this post, the original Caslon flat sat too far from the track. So what you see here is a revision of that flat in progress. 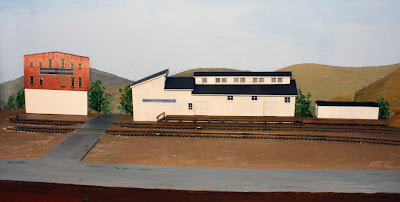 My Caslon revision involved cutting off the bottom of the original flat, the part with the loading doors, moving it two inches forward to sit alongside the tracks, cutting a pair of 2-inch side walls from foam core, and covering the side nearer to the viewer with parts of the 3rd story of this building I removed originally in cutting it down. (You can read about that process here: http://modelingthesp.blogspot.com/2013/02/background-flats-2-kitbashing.html .) That’s another example of the old adage, “don’t throw stuff away if there is any conceivable future use for it.”
Below is the new addition to the bottom of the Caslon building, with the two side walls done, and angled supports for a piece of foam core as the sloping roof. In this view, I have yet to apply a coping along the wall tops, which I made from  quarter-inch wide strips of 0.040-inch styrene, painted “Concrete.” 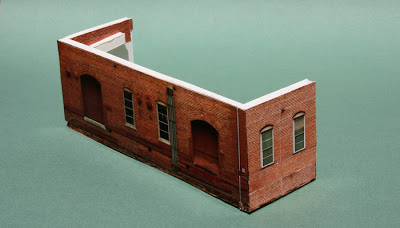 The new addition also allows the background flat to stand up vertically without having to glue or tape it to the wall, which for me seems better. With the coping and roof in place, here is the entirety of the revision on the layout, completing the building. (You can click to enlarge.)

In the left foreground you can see one of my Walthers billboard structures, with an interchangeable ad for Lucky Lager beer in it. This idea was discussed earlier, at: http://modelingthesp.blogspot.com/2015/04/interchangeable-billboards.html . In addition, at lower right you can see my model of a California tankhouse, described in previous posts (such as: http://modelingthesp.blogspot.com/2015/05/building-california-tankhouse-part-2.html ).
I'm happy to have a more believable loading dock at Caslon Printing, as before it was about 15 feet from the track, kind of a long reach for a plank to unload cars. And as mentioned it works better to support the building flat, too. My scenic locations along Pismo Dunes Road are coming along nicely. More later.
Tony Thompson
Posted by Tony Thompson at 12:47 PM