Several years ago, Richard Hendrickson and I happened to discuss a tank car project we both were interested in doing. It is an AC&F-built LPG (Liquified Petroleum Gas) tank car owned by the Anchor Petroleum Company of Tulsa, Oklahoma. Five of these cars were built for Anchor in December 1944, numbered ANPX 2410, 2420, 2430, 2440 and 2450. These were 10,500-gallon insulated cars, and Richard and I were both aware that this is about the tank size of the Athearn “chemical” car, suggesting an obvious starting point. Here is a prototype photo, from AC&F, courtesy Ed Kaminski.

This photo is also on page 100 of Kaminski’s book, American Car and Foundry Company, 1899–1999 (Signature Press, 1999), now out of print. And there used to be a Champ decal set, no. HT-60, for this white-lettering paint scheme.
After World War II, however, Anchor began to use a different paint scheme for its  ICC-105-type cars like this, with reversed lettering, that is, black on aluminum, with either the entire tank, or just the upper part above the bottom sheet, being aluminum. Either scheme is dramatic, with the size of the “ANCHOR” lettering. Champ once offered a set for the black lettering, set HT-160.

For this scheme, the white lettering would have to come from set HT-60 and the black lettering from set HT-160. For my 1953 modeling date, either scheme is all right, and the aluminum scheme would show off details better.
For modeling, the Athearn car has a General American underframe instead of AC&F, and has the well-known problem that its valve bonnet and platform are hugely out of scale, actually a little too big even for S scale. (See for example my blog post showing the oversize nature of the Athearn bonnet, which is at: http://modelingthesp.blogspot.com/2010/12/upgrading-old-models-2.html .) There are replacement options for the bonnet, though, and as seen above, this Anchor car did not have a platform, only a short walkway on one side. The underframe can certainly be modified in the right direction, so the project looked feasible. I will show photos of the car I am working on, following Richard’s lead.
The first step was to clean up the tank body, removing the Athearn valve bonnet, platform, and handrail supports, and shaving off the incorrect rivets on the bottom sheet. Added here is a resin valve bonnet, given to me years ago by Frank Hodina, and a short walkway below the bonnet (as you see in the prototype photo above) on the right side of the car. Brass wire grab irons were also added at the four corners of the tank. Here is the tank at this point. Holes have been drilled for handrail stanchions.

The underframe received end sills built from styrene channel, then side sills from the bolster to the end sills. 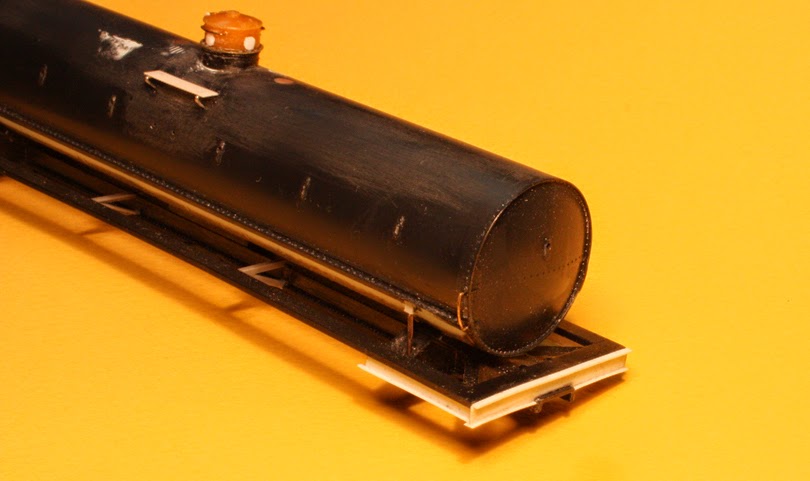 Once the weight is installed inside the tank, and the tank screwed to the underframe, short brass wires were used to represent the tank hold-downs at the bolster (see photo above). The Athearn underframe uses an I-beam-like support for the running board, extending from the center sill, but the AC&F ones were usually diagonal channels. That exact part is in the Tichy tank car detail set, so those supports were added. 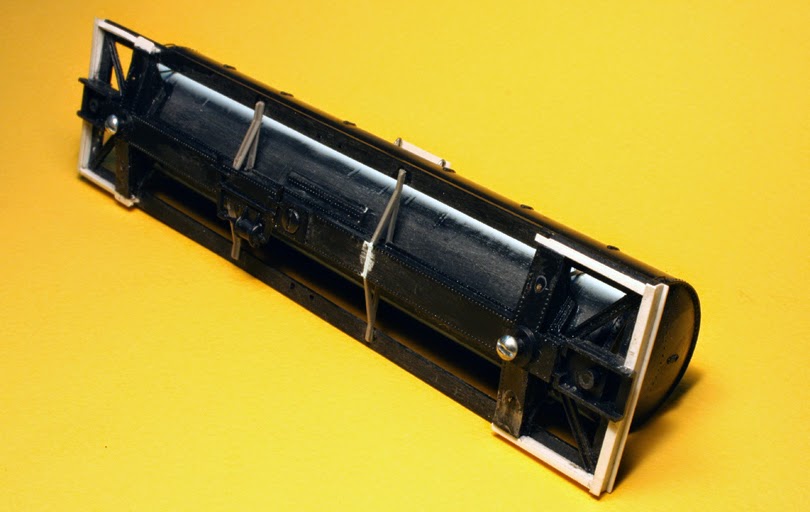 Addition and completion of the brake gear is next, followed by installing handrail posts and forming a new handrail for the car.
I will continue with progress on this model in a future post.
Tony Thompson
Posted by Tony Thompson at 10:26 AM