Last year, I made a number of trips to Ashland, Oregon, to help Richard’s widow, Sandra, with all the model railroad materials he had accumulated. The entire photo collection, estimated at 30,000 prints (more than 30 cubic feet), has now gone to the California State Railroad Museum, as have most of his railroad books; the balance of the books went to the new Railroad Museum at San Luis Obispo. His accumulation of styrene and resin freight car kits has been sold on-line, as have all his Santa Fe brass locomotives and rolling stock.
On his workbench were a few in-progress projects. As I knew from previous visits, his usual procedure when working on a particular model was to scan and print the appropriate prototype photo from his collection, and then place that print in a clip above the workbench for easy reference. There was just one print which matched a project on the bench, a Wheeling and Lake Erie gondola. Here is the prototype photo. I am not certain of its origin (nothing was marked on the back of this work photo), but it looks like one of Howard Ameling’s prints. 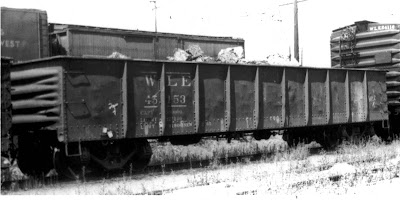 I decided I wanted to complete this model out of respect for what Richard was doing.
I don’t know an awful lot about the W&LE, but I was able to consult Richard’s card file. Obviously dating from before the convenience of home computers, he had long maintained this file of 3 x 5-inch cards, containing descriptions of cars in photos (many of them in his own collection, others in books), as far as he could research them. Here is the well-worn card file box. 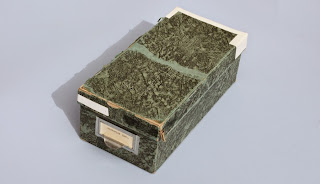 The box label reads “prototype info.” And here is his card for the group of cars for the photo shown above (there are more data on the back of the card). 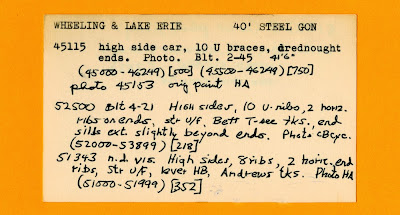 In brief, the W&LE bought three batches of cars like this. The first batch, WLE 45000–45499, was built by Bethlehem Steel in February and March of 1945; the second group, 750 cars, WLE 45500–46249, by Ralston Steel Car in December 1946; and the third batch, WLE 46250–46749, by Bethlehem Steel in October and November, 1948. All were 41 feet, 6 inches long and 4 feet, 8 inches high inside (making them a high-side gondola) with 10-rib sides, and the same cubic capacity level full, 1842 cubic feet. So Richard had chosen a representative of 1750 cars, a big part of the W&LE fleet. It was not a new design for the W&LE, as they had built 1000 very similar gondolas in 1921. Ray Breyer helped me nail down some of these details that Richard had not noted.
Richard had already modified the car body, I think from an old Mantua 10-rib model. He had added better Dreadnaught ends, along with underbody brake gear and the correct Ajax brake wheel. The grab irons had not been installed, though he had painted the car body and done the lettering, and had even made a start on denting and weathering the car sides. There was a note on the parts box, “TMW [Tahoe Model Works] B-1 trucks,” and since I have a pair of those on hand, I could add them. Both he and I had standardized on Kadee no. 58 couplers, and I added those. I used Westerfield 18-inch grab irons, a product I like and often use.
Richard also had not added the car weight nor the floor, possibly because the floor did not fit quite right with the new ends. I did some cutting and filing to make the steel weight fit, and attached it with canopy glue, a superb adhesive for dissimilar materials like this weight and the plastic body. (If you’d like to know more about this glue, you can read my post which discusses its use, which is at this link: http://modelingthesp.blogspot.com/2013/05/a-few-words-in-praise-of-canopy-glue.html .)
The plastic floor with the kit represents a steel floor, which the prototype cars did have. It was a little distorted, maybe from trying to make it fit (suggesting it might not be from the same manufacturer as the car body), but again, a little trimming and it was made to fit. Richard had already built a pipe load for the car, and since the load was in the box with all the parts, I simply added it too. 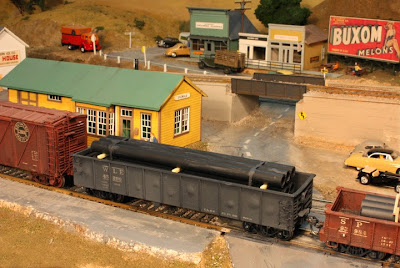 You will note in this photo that Richard used his “denting” method on this model, using puddles of thick CA on the car sides to look like dents pushed out from the interior, a method he gradually improved over the years.
Though I did not have to do much to complete this car, I enjoyed the feeling that I had finished something Richard had started, and that the car can now be part of my own layout operations.
Tony Thompson
Posted by Tony Thompson at 3:11 PM