In my previous post (see: http://modelingthesp.blogspot.com/2015/05/flash-tracklayers-enter-santa-rosalia.html ), I showed new trackage entering Santa Rosalia, and in the background are a couple of new structures. This post is about them.
One feature I always wanted to include in my town of Santa Rosalia, which lies just at the Pacific Ocean shore, was a fish cannery. At one time, there were canneries of various sizes at a number of locations on the California coast, and I would have space for a small one. A background flat or nearly flat structure seemed to be the best approach in my limited space, and for a number of years I had kept my eyes open for any kit or other structure, which looked like a cannery to me.
I have considered a substantial number of candidates over those years, without feeling I was getting it right, until one day I happened to look closely at a Walthers “Cornerstone” background building, Arrowhead Ale (Walthers no. 933-3193). Now “ale” sounds great, and tempting as it was to have a brewery on the layout (I do enjoy a good beer from time to time), this structure looked just right to me as a cannery, so I bought one. It’s a two-story building, not too large for my small coastal town, and has a suitably old-fashioned look.
When I opened the box, I discovered that extra parts are included, most prominently a whole bunch of extra windows, and also some extra wall sections. These of course immediately suggested that perhaps I could concoct additions to the structure to make it longer. If built as intended, the main building is 11.5 inches long (the loading platform projects another 3/4 inch), but I could see how to use the 4.25-inch width of that extra wall molding to add to the main building.
Here is the kit box photo, indicating what Walthers had in mind. Of course they have added other buildings alongside, and the appearance of still more buildings behind this one through use of a backdrop. I too have a backdrop, but not an urban one like this. 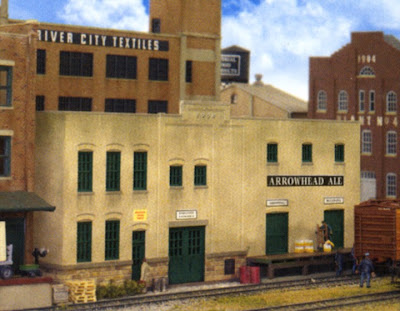 My first step was to cut up the extra wall section to make a two-story addition to the main building. I only used two stories out of the six in the molding, the bottom piece and the third from the bottom. This comes out very close to the height of the main building, and avoids the round-topped windows, a window style which is not in the main structure. 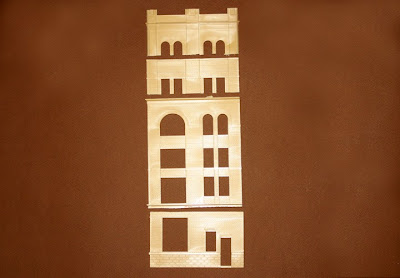 Once the cuts on pieces one and three were cleaned up, I used Plastruct “Plastic Weld” to join them, as it softens the plastic enough to enable pressing the parts together and squashing any irregularities, to make a tight joint.
I decided to use a distinctly gray grout color on this brick building, and also to color the window lintels and sills as concrete. I completed those steps before the windows were installed. Then after the windows and doors were installed, I used mixtures of acrylic tube Raw Umber and Yellow Ochre to touch up the stone of the base wall area. With that complete, I did some weathering of the walls with acrylic washes, in my usual way. Here are the wall panels at this point. The panel at left is the assembly of the cut pieces shown in the photo above.

I could now assemble the structure, simply following kit directions. I added a few window shades, and for the leftmost piece in the photo above, a plain gray backing as a view block for the windows. Here you see the structure in place on the layout, with the Pismo Marine Services building at left. (You can click on the image to enlarge it.)

(Pismo Marine was made from one of the buildings in a KingMill Enterprises background flat, their “Commerce Street No. 9,” just one of a series of superb products. That same flat was the source from which I created my Caslon Printing Company, which you can view at this link: http://modelingthesp.blogspot.com/2013/02/background-flats-2-kitbashing.html . You can visit their site to see all their fine backdrop buildings, at: http://www.kingmill.com/All-Products_c_9-2.html .)
You may notice that the business in my cannery is named “Martinelli Brothers.” There was once a prototype Martinelli Brothers fish cannery in northern California, part of the one-time dominance of the California fishing fleet by Italian immigrants. It is no coincidence that all the big restaurants around San Francisco’s Fisherman’s Wharf bear the names of Italian-heritage proprietors.
Both these simple background buildings turned out well, from my viewpoint, and are not only interesting and appropriate industries, but also help set the coastal location for my town of Santa Rosalia.
Tony Thompson
Posted by Tony Thompson at 10:22 AM