In Part 1 (see it at: http://modelingthesp.blogspot.com/2015/04/building-california-tankhouse.html ), I gave the background of these interesting structures, and showed my construction of the bottom part, the upward-tapering enclosure of the tank supports. The structure is completed in this post.
In the prototype tankhouses I have looked at, the upper part, the “upper story,” has the same or almost the same dimensions as the ground footprint of the lower part. To model this, I used Evergreen styrene “Novelty Siding,” 0.040-inch thickness, no. 4083. I simply cut out sides and ends with the same footprint as my first story. In thinking about windows for this upper story, I realized that there seem to be no two of these prototype structures alike in number or placement of windows, so almost any arrangement would be acceptable. I chose a window from my scrapbox, a left-over from a Campbell kit of long ago.
Next the window frame was painted SP Light Brown (Tru-Color Paint no. 163) and the four sides and floor of the upper story were airbrushed SP Colonial Yellow (TCP no. 153). Now I was ready to assemble this top story. (The center of the floor didn’t need to be painted.)

As you can see, I decided to place the window in one end of the top story.
I used my usual styrene structure assembly method, with 1/8-inch square styrene inside all corners. Here are the parts that you saw above, assembled including trim strips, and ready to mate with the first story.

My next job was the roof. I used Rix “Pikestuff” styrene shingled roofing, their part no. 1007, prepainted SP’s standard roof color, Moss Green (Tru-Color no. 154). A narrow strip of flashing along the peak completed the roof. I then used canopy glue to attach the two stories together. 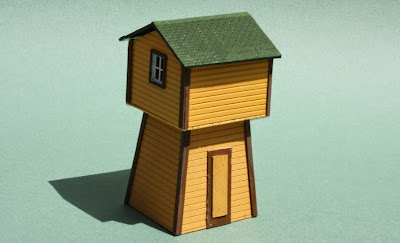 The tank house is now complete except for weathering. It will be part of my stock pen, as the former water source for watering troughs. (I introduced the subject of this stock pen in a prior post; you can read it at this link: http://modelingthesp.blogspot.com/2015/03/a-stock-pen-for-east-shumala.html .) Like many of these tankhouses, it would have been made obsolete as a tank when domestic water became available in small towns. I will show it again when the stock pen complex is complete, which I expect to be soon.
Tony Thompson
Posted by Tony Thompson at 8:44 AM