In my previous post, Part 2, I described my conclusions about structure size and shape, based on experimenting with a mock-up structure (you can read it at: http://modelingthesp.blogspot.com/2013/10/building-guadalupe-fruit-part-2.html ); that was back in October 2013. Obviously the project has been on hold awhile! At any rate, having decided to build pretty much the original two-story building, with a truck dock at Bromela Road and a shortened loading dock for reefers, I only (he said boldly) have to actually build the model!
My plan was to use Evergreen styrene clapboard and Grandt Line windows and doors, making the project fairly straightforward. It’s also often useful to think about color schemes and trim at this point, and I decided to make the building light gray, with medium gray trim. That would mean pre-painting all the trim boards before assembly, including window surrounds, if they are to be a contrasting color. It would also be possible to paint window frames and mullions a different color, such as white, as was more common in past years, though I decided not to take that step on this structure.
I decided to use 0.040-inch styrene clapboard for this frame structure, specifically Evergreen no. 4051. (The back wall, visible from nowhere on the layout, could be a piece of plain sheet.) For windows, I chose Grandt Line products as follows. I wanted the packing house working areas to have somewhat sizeable windows, with a different window in the office area of the building. I also decided to use a horizontal-sliding window to indicate a stairwell location. The front door, opening on Bromela Road, would contain windows.
Most windows: Grandt no. 5117 (36 x 64-inch, 4-pane style)
Office windows: Grandt no. 5060 (30 x 69-inch, 4 panes)
Stairwell window: Grandt no. 5081
Front door: Grandt no. 5163 (33-inch door)
Freight door onto platform: Grandt no. 5073
You can see in the view below that the window openings have been laid out in pencil on the back of the sheet styrene walls. It is worth taking some time to make sure all locations and sizes are correct. And be sure to remember that when you lay out of the back of the wall, things are reversed left to right. You can probably guess how I learned this. (Click to enlarge.)

The styrene walls you see above were easy to cut out, because I had previously cut out the mock-up walls from sturdy Bristol board, and the walls of the mockup served nicely as patterns to cut out the sheet styrene. I measured them to make sure I knew all relevant dimensions. The main structure is 25 scale feet tall, and the footprint (also the roof plan) is shown below. The angle of the building reflects the angle between two tracks in my layout town of Ballard. 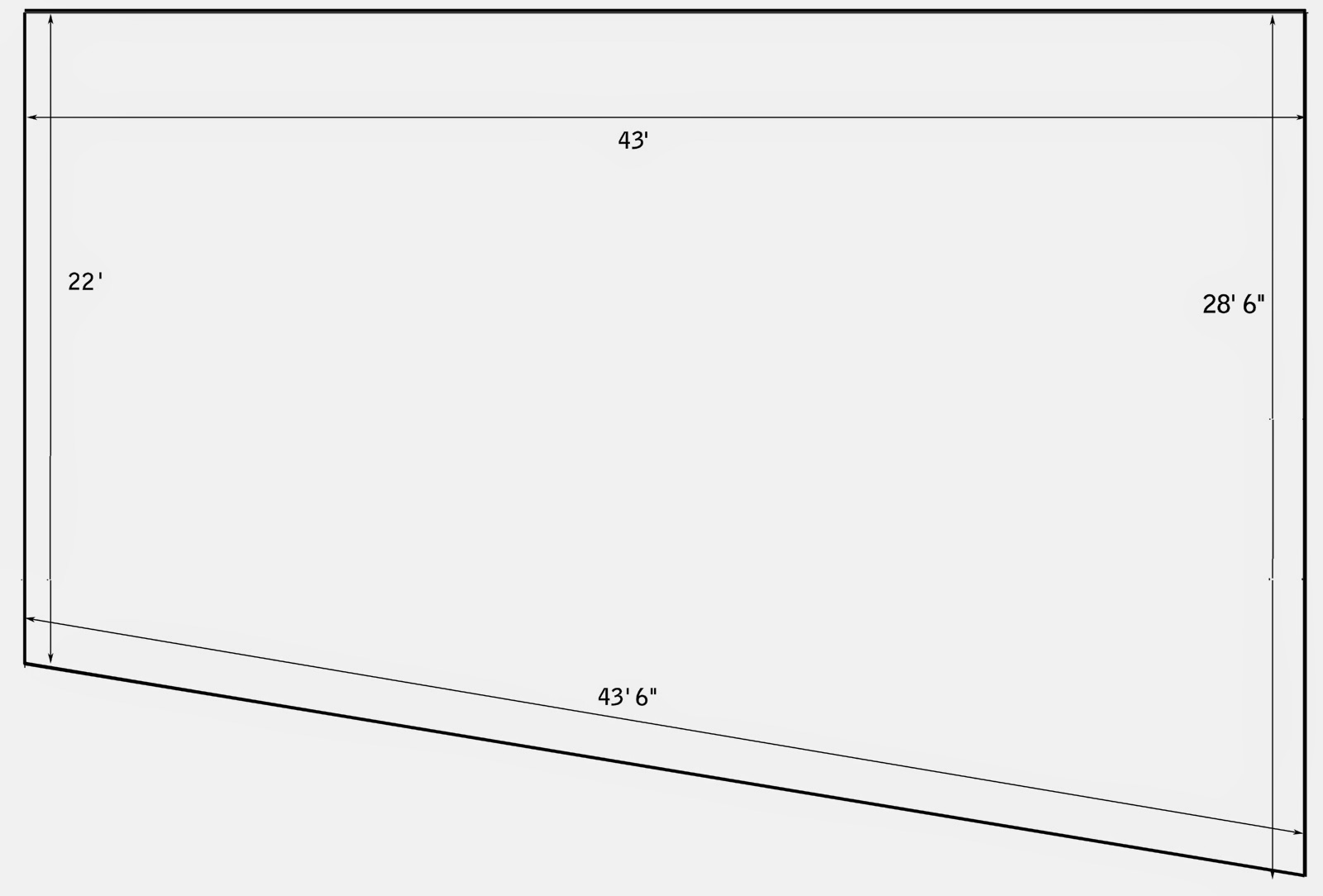 A simple way to cut window openings is with a “corner chisel,” which makes a nice, square corner cut. A hobby knife can then be used to connect the corner cuts. The chisel I used is from Micro-Mark, their item no. 82394, and it looks like this:

In use, the chisel is easy to handle. Just a light tap with a small hammer will cut the corner in styrene.
With the window and door openings laid out, as shown in the first photo above, and use of the corner chisel, I made quick work of cutting all the openings. These openings mostly required very little clean-up with a small file. I then decided to assemble the four walls (using 1/8-inch square styrene in the corners) and make a trial roof out of Bristol board. That’s shown below. The walls are painted with Testor’s “Flat Aircraft Light Gray” (no. 1233). The doors and windows, not yet inserted, were painted with Testor’s “Flat Aircraft Dark Gray” (no. 1226), as was the trim strip material.

The loading dock for railcars that you see above was built of Evergreen styrene, no. 4100 V-groove for the deck, and no. 4083 Novelty siding for the sides.
On the Bromela Road side (the far side in the view above), I decided to inset the truck unloading dock into the building wall, because that provides a simple roof over the dock, and it is a feature visible on some prototype loading docks. This remains to be added to the building you see above. I also need to cut a styrene roof sheet for the building, to replace the cardstock one shown above.
To this point, the project seems to coming together nicely. I will report on its next steps in the following post in this series.
Tony Thompson

Posted by Tony Thompson at 2:04 PM