For a couple of years now, I have been describing my goals for the end of my mythical SP branch line, at the seacoast town of Santa Rosalia. In the fall of 2013, I was building the benchwork and completing the backdrop extension to that corner of the layout (see: http://modelingthesp.blogspot.com/2014/01/constructing-santa-rosalia-backdrop.html ). In the summer of 2014, I was starting on modeling the water’s edge (read about it at: http://modelingthesp.blogspot.com/2014/07/constructing-santa-rosalia-waters-edge.html ). More recently, I have been posting about constructing the American Model Builders kit for the SP Common Standard No. 22 depot (for example, recently at: http://modelingthesp.blogspot.com/2015/03/sp-depot-santa-rosalia-part-2.html ), and about the trestle to carry the track from Ballard over Oso Flaco Creek into Santa Rosalia (check it out: http://modelingthesp.blogspot.com/2015/04/building-sp-pile-trestle.html ). But all these things are preliminaries.
When the Santa Rosalia name was chosen, I wanted to use one of the typical Spanish saint’s names, as are so common in California as well as throughout Latin America, but did not want to choose one already used in California. There is a real Santa Rosalia (a small place) in Baja California but not in American California, so I chose that. For those unsure of my modeled area, I described some time ago the layout locale that I envision for my mythical branch line, including a map with the location of Santa Rosalia. You can view it at: http://modelingthesp.blogspot.com/2011/01/layout-design-locale.html .
With operating sessions on my layout coming up at the rapidly approaching convention of Pacific Coast Region (NMRA), I was determined to get some trackage into Santa Rosalia to extend the switching work to that point. Essentially there is a kind of yard throat as a train enters Santa Rosalia, with multiple switches giving access to multiple tracks (the cannery track, house track, main, and siding). In my column for the “Getting Real” series in Model Railroad Hobbyist, for October 2014 (you can download any issue of MRH free at their site, http://model-railroad-hobbyist.com/magazine ), I presented schematic maps for some of my towns, but not for Santa Rosalia, mostly because the track plan was in flux. But it is now pretty well set. It’s shown below as it’s being built.

Here are some views of the new track at Santa Rosalia. First, I show the curving track that has just crossed the creek, and extends into town. And yes, that’s actually a box of Varney spikes on the right (sold as 1/4-pound of spikes, “over 3000 spikes”). I bought this box back in the 1970s for my first layout efforts, and I still have about a third of a box. The water tank is not in its correct location; it will be placed down past the depot. 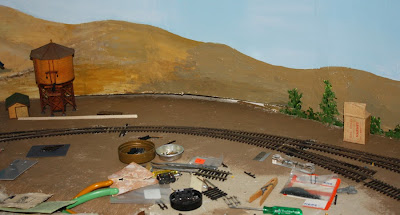 Looking farther to the right of the above photo, the current extent of track is shown. Obviously I  already have both the “cannery track” buildings in place (see map above). But rather than talk about them now, I will describe their construction in my next post.

At lower right, you see the Xeroxed three-way switch that will be located there.
It’s fun to be able to operate into Santa Rosalia, something I have waiting a long time to do. And it will give my operating session crews more to do also.
Tony Thompson
Posted by Tony Thompson at 2:01 PM