As I mentioned in a previous post, the San Francisco Bay Area is hosting a nationally-invited operating weekend in March, called BayRails. It has been held every two years, and this will be the eighth in the series. (My post mentioning my layout work in preparation for BayRails can be seen at: https://modelingthesp.blogspot.com/2019/02/refreshing-layout.html .) As further preparation, I hosted two operating sessions last weekend, as sort of a dress rehearsal for how the layout will look for BayRails, and how it will operate.
Some kind of “test session” was especially appropriate, because I am in the midst of introducing several new features in the operation. Probably the most visible new feature is that the final remaining uncompleted track on the layout, Track 7 at Ballard, is now partly completed, and the crews had a loaded car to pick up at one of the industries on Track 7, the Union Brass Foundry (a Classic Miniatures kit). You can see the location of this track in my schematic map of Ballard in an earlier post (you will find it at this link: https://modelingthesp.blogspot.com/2018/06/my-ballard-track-arrangement.html ). Here’s the pickup, from the foundry at left, just passing Jupiter Pump and Compressor at right. 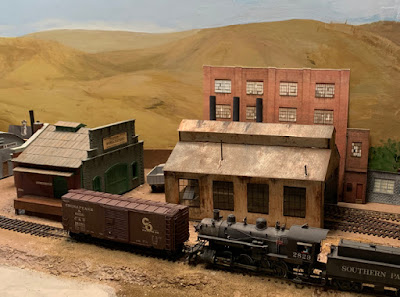 Something I want to get right is that I am still learning how the “layout clock” works best. I described in a prior post how I want this to work, including my preference for “actual time,” that is, a 1:1 clock ratio (that post is here: https://modelingthesp.blogspot.com/2018/05/an-operating-session-with-clock-and.html ).
The use of a clock set to a particular starting time, even if 1:1 speed, allows me to choose which parts of the timetable for the main line are active. I have discussed previously the way I can fit my operating session time requirements into the actual prototype timetable for the Coast Route (see that post at: https://modelingthesp.blogspot.com/2019/02/timetable-planning-for-operation.html ).
I have done this “time slot planning” for previous sessions, and once again, it worked well this weekend, with some small tweaks to the details. I also used a line-up to inform Shumala crews, an idea I’ve discussed previously: https://modelingthesp.blogspot.com/2019/01/line-ups-for-operating.html ).
And last but not least, I introduced the blue-flag paper work that I described in a recent post, intended to make operators more aware of the presence of the flags (you can read my prior post on this topic at: https://modelingthesp.blogspot.com/2019/02/blue-flag-awareness-part-2.html ). As it turned out, there were no critical flag-time issues in this particular session, so I guess it wasn’t really tested. But I was glad to include it, and it will continue in future sessions.
As usual this weekend, we had duplicate sessions on Saturday and Sunday, with two two-man crews each day. I calculate these to have been the 42nd and 43rd sessions on this layout in its Berkeley form (there were a couple of dozen sessions when I lived in Pittsburgh). It was especially nice to have a first-time visitor present to operate, veteran modeler Verne Alexander, and he formed a crew with John Rodgers. In the photo below, John is at left while working at Shumala, evidently puzzling over a challenge in the paperwork. The photo includes the layout clock on the far wall. 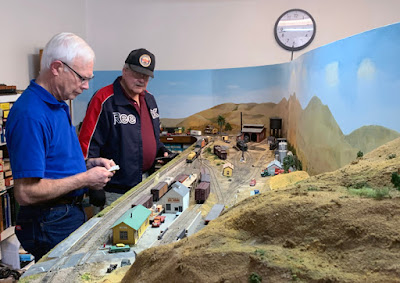 The other crew was Seth Neuman and Jeff Aley, pictured below when it was their turn to do the switching at Shumala. Jeff was the conductor and Seth the engineer in this view. 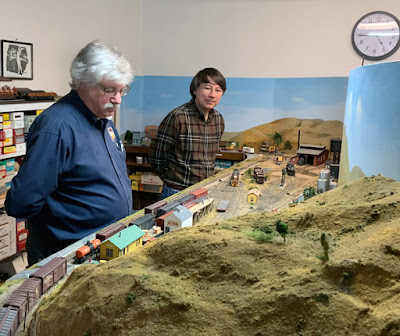 On Sunday, two new crews took on a session of the same pattern, which is what I usually arrange. On this day, one of the crews was Jim Radkey and Bryn Ekroot, shown below at Ballard on the layout, with Bryn at right. It looks like Bryn was still developing his switch list in this view, while Jim appears to be in the middle of a switching move. 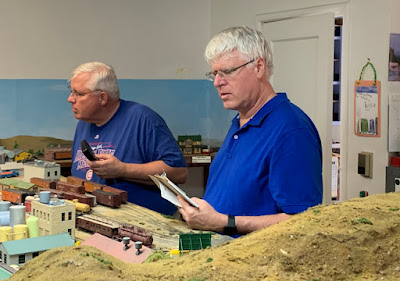 The second crew Sunday was Pat LaTorres and Ed Slintak. They are shown below when it was their turn at Shumala. 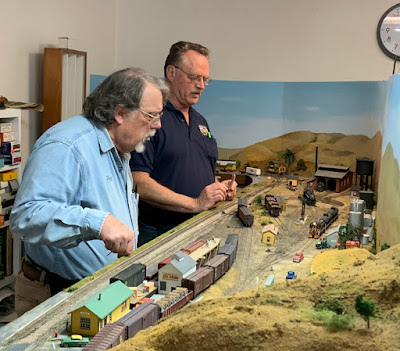 These two operating sessions of course tested once again, as all sessions do, the trackwork, electrical arrangements, rolling stock, and scenery, but as I described, a few additional features were included (and tested) as well. I was pleased with how well it all worked, and I’m looking forward to BayRails.
Tony Thompson
Posted by Tony Thompson at 10:38 AM