My column in the February Model Railroad Hobbyist

Another of my magazine columns in the “Getting Real” series has appeared in the February 2019 issue of the on-line publication Model Railroad Hobbyist. The magazine since its inception has been free on-line or to download (visit their website at www.mrhmag.com ), but recently parts of the content have become subscription-only, in an enlarged magazine called “Running Extra.” It only costs $1.99 extra per issue, so not expensive, but this does represent a change in the availability of MRH. And my column this month does fall into “Running Extra.”
My topic was the prototype information I collected, interpreted, and put to use in choosing a locomotive fleet for my layout. These are Southern Pacific steam and diesel locomotives appropriate for my 1953 modeling year. I provided a modest bibliography of published books and articles, along with some electronic resources, and including links to a couple of earlier posts in this blog on the topic.
Steam predominates on my layout, consistent with what I know about SP motive power on the Coast Division in 1953, and I showed both prototype and model photos of various locomotives I chose for my fleet. For example, one of several Harriman Consolidations I roster is SP 2752, an engine long assigned to San Luis Obispo and thus likely to be seen operating on the mythical branchline I model, only 20 or so miles south of San Luis. Here is that engine switching the Union Oil Company spur in my layout town of Ballard, part of the work of this day’s Santa Rosalia Branch local. 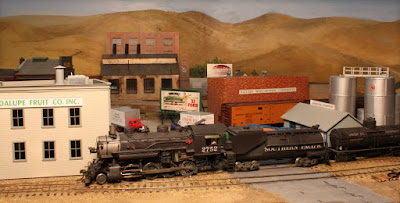 This is a pretty stock Key Imports Class C-9 SP Consolidation. This is a photo not used in the column, as are the other images in this post.
In addition to small steam like the Consolidations, I have also modeled one of the two Mikado wheel arrangements assigned at San Luis Obispo, SP 3251. It often operates in my layout sessions on the Surf Turn or the Guadalupe Local. Here we see it about to depart the branchline junction at Shumala, after doing its switching work there.

Not having been able to find a brass model of an SP Pacific Lines Class Mk-6 Mikado, the class to which SP 3251 was assigned, I obtained a Hallmark Models import of a T&NO Class Mk-5. Alan Massi redetailed the locomotive to match the Pacific Lines engines, and also repowered the model and added a DCC decoder in the Vanderbilt tender.
Finally, I did spend some time in the column discussing big steam, such as SP’s handsome Mountain types. As I commented in a recent blog post, the Athearn Genesis version of this locomotive is an excellent and well-detailed model (see that post at: https://modelingthesp.blogspot.com/2018/12/the-sp-4-8-2-from-athearn.html  ). Here is my model, SP 4349, pulling an extra passenger train and just passing the Shumala depot. 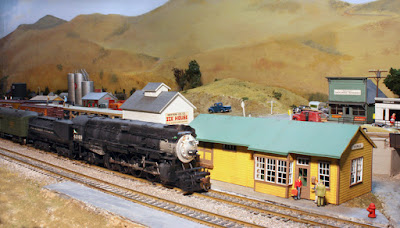 It has been fun, over the years, to accumulate, interpret and understand the many published and unpublished resources that document SP steam and diesel power. That background has been the basis for my modeling choices, and was summarized in my column in the February MRH.
Tony Thompson
Posted by Tony Thompson at 11:23 AM