I have written previously about building loading docks for layout industries. Many kits for industrial buildings do provide for rail-served loading, but when one has a structure re-purposed from something else, or scratchbuilt, there may be a need to add some kind of loading dock or facility. I showed my basic construction method in a previous post (you can find it at this link: https://modelingthesp.blogspot.com/2015/03/freight-loading-docks-and-platforms.html ).
In brief, I simply build a styrene box. Typically I use 0.040-inch styrene sheet, scribed if intended to represent a planked dock, plain if intended to represent concrete. I simply lay out rectangles or whatever shape is needed, of appropriate size to make a scale 3-foot tall dock, then assemble with styrene cement, applying 1/8-inch square strips inside the corners. An example is shown below (I will say more about this particular dock later in the post). Part of the right-hand wall is absent because that part of the dock will be against a building wall. 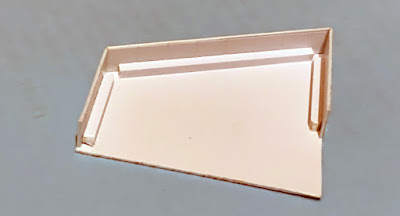 Really, any dock can just follow this same idea, with different dimensions.
As I’ve progressed with getting my last group of industries in my layout town of Ballard into service, one thing that emerged right away was loading docks. I had not worried about this part of the structures because the track alignment was not quite permanent, and I felt I should match the size and shape of any loading docks to the relative location of building and track. But now that track, Track 7 in Ballard, has been put into service (as reported in a recent post, which is located here: https://modelingthesp.blogspot.com/2019/03/putting-my-track-7-into-service.html ), and suddenly these docks are needed.
One of the industries that needed a loading dock is my machine shop, housed in a Quonset hut. I built the model from an ancient Tru-Scale kit, as I related previously, and in the post about it, I mentioned that I would build a loading dock after the track alignment was established (see the post at: https://modelingthesp.blogspot.com/2016/04/quonset-hut-machine-shop-part-2.html ).
For this business, I decided to build a concrete loading dock with a ramp for fork lifts. This is still a styrene box, but with ramp sides made as described in the post cited in the first paragraph of the present post. As I usually do, I made the ramp at a 1:4 slope, as seems to have been common.

Next came painting these docks. The dock shown just above was to be concrete, and though it is no challenge to paint something using a model paint called “concrete,” I wanted to show some variation in color, along with wear, weathering, dirt, and so on. I used Model Master “concrete” as a base, but varied it in some areas with my own mix of a warm gray, about as dark as the Model Master color but a little warmer. When that was dry, I used Prismacolor pencils to make a few streaks and dirty areas, and finally used an acrylic wash in brownish-gray to blend everything together.
The dock serves the machine shop, and because heavy parts may be handled, a fork-lift truck is appropriate to be on the dock at times. That’s what you see here. 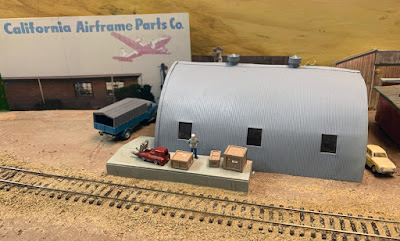 In the background you see the adjoining industry, California Airframe Parts, in the form of a flat made from a prototype photo of the actual building  near the Oakland Airport. I described the prototype and the making of this flat in an earlier post (see it at: https://modelingthesp.blogspot.com/2014/07/making-building-flat-from-prototype.html ).
For the wood-surfaced dock going to Nocturnal Aviation (the dock shown in the first photo in the present post), I used a medium wood color from Testors, and painted the concrete sides of the dock the same way just described for the all-concrete dock. Then I used Prismacolor pencils again to vary the darkness and degree of brown of individual boards on the dock.
This dock is shown below in completed form, with some crates on the dock, a workman present, and a pickup truck backed up to the side of the dock. 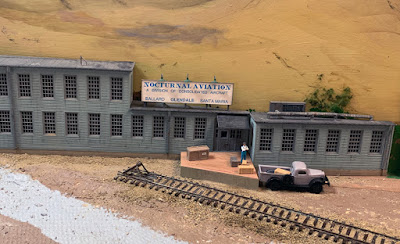 Adding these loading docks was essential for being able to realistically switch the industries along Track 7, thus a much-needed project. The dock design and construction largely mirrors previous loading dock projects I have done, so it was straightforward to carry out. And it has been fun to get these industries ready to go to work.
Tony Thompson
Posted by Tony Thompson at 9:40 AM