My layout models a branch line of the Southern Pacific (a mythical one), and does not have a yard in the usual sense. But yard-like work has to be done at the branch’s junction with the Coast Route main line, despite the limited trackage, and accordingly the junction town, Shumala, is located in yard limits. On the main line, these limits extend beyond the modeled portion on the layout, but only extend a short way on the branch itself. There is a yard limit sign at that point, as I described in an earlier post (you can view it at: http://modelingthesp.blogspot.com/2015/08/small-mdodeling-project-yard-limit-sign.html ).
On the prototype, yard limit rules permit any train or engine to enter the protected yard, operating at restricted speed and prepared to stop short of obstacles. (Rule 93 for yard limits was quoted in the post cited just above.)  But in some circumstances, including limited visibility into the yard, a number of railroads provided a signal indication at or  near yard limits, to inform train crews as to whether the entry track was clear. I decided to do the same.
Since dwarf signals are often used in yard situations, I decided to use that type of signal. And since my layout models Southern Pacific, I wanted to use an SP-style signal. For an example of how Southern Pacific dwarf signals looked, one can consult the ample prototype photography that exists. Shown below is a detail of a Robert Hale photo at Lathrop, California, taken during the transfer of the through chair car from the Sacramento Daylight to the San Joaquin Daylight in 1955. (The power on No. 52 happens to be SP 4449.) The dwarf signal is located between the tracks. 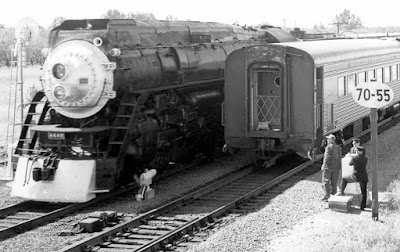 (The Hale photo is from the M.D. McCarter collection.)
My dwarf signal is intended to control entry to yard limits when arriving from the branch. I decided that the right location would be alongside the yard limit sign. I made up a level pad on the hillside slope below the tunnel that leads to the branch, as you can see at the lower center of the photo below. The yard limit sign is across the tracks from the pad. 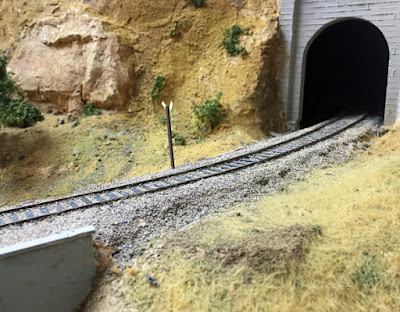 Digging around in my catalogs of detail parts, I found a perfectly appropriate model, a Century Foundry kit for a Union Switch and Signal dwarf. Here are front and back views of the kit package, showing how the signal is intended to look when assembled. The sketch of the assembled kit, right, looks just like the SP prototype shown in the photo at the top of this post. 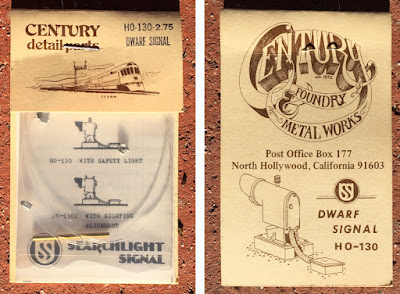 This kit originally contained clear plastic rod, intended as a light pipe so that the signal could be illuminated. But in my layout situation, the signal is aimed into the tunnel, so that approaching train crews could see it. That in turn means that model railroad operators cannot see it. I will need to provide a signal repeater panel for operators.
This signal kit is still available, in the Century line now owned by Showcase Miniatures. They have revised the kit so that LED lighting can be installed right in the signal body, instead of with a light pipe, and it is now identified as kit no. 2194. You can see it on their website if you’re interested (the relevant page is at: https://www.showcaseminiatures.net/ho_scale/ho_scale_signals_wigwags_trackside_details/ ). This is the package label. 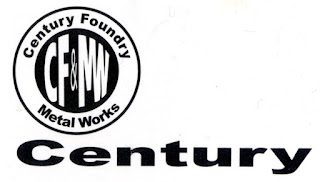 The Century Foundry kit is simple, with just four parts. I cleaned them up with a small file, and assembled them with CA. I then painted the signal, and its junction box, with silver paint, to suggest the usual SP practice of aluminum paint on such appliances. I added an Alexander battery vault cover, their part no. 3110. Below is shown the installation. Because it needs to be aimed into a curved tunnel, it is some ways from the track, instead of right alongside, as it would be for tangent track. 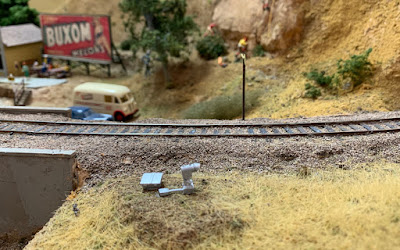 To portray the signal more in layout context, I took a photo looking down the track toward the yard, with the yard limit sign on the right. This is about the view that could be obtained standing on the hillside next to the tunnel. 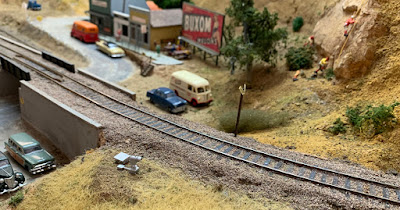 As I mentioned, now that the signal is installed, I need to make a repeater panel for the layout fascia, so that arriving train crews have a signal indication without craning their necks to try and see the signal itself. That repeater installation will be described in a future post.
Tony Thompson
Posted by Tony Thompson at 8:40 AM