The subject of this post is a little changed from the previous post, in which I identified what the old “Blue Box” Athearn 40-foot box car is, and is not. It is modeled with a sharp-corner Dreadnaught end for a car with 10 feet, 4-inch inside height, a quite unusual combination of characteristics. You can read that post at: https://modelingthesp.blogspot.com/2022/01/upgrading-blue-box-box-car.html .

In the present post, I turn to a different question: let’s imagine that you grant that the model has practically no prototypes, but you want to use it anyway. What would be done in upgrading it — assuming, of course, that you see any shortcomings in the model as it comes in the box.

I would begin with what I think is an underappreciated aspect of our model freight cars, the roof. Most areas of nearly all model railroad layouts are at a height providing an excellent view of the car roofs. So any shortcoming on car tops is unavoidably obvious.

Athearn for many decades provided a molded plastic running board representing a steel-grid running board, though doing so rather poorly, as it has hardly any three-dimensional relief on its upper surface. Back in the day, it was also disturbing thick, approaching a scale foot, but in more recent years it has decreased to about 6 scale inches, still 4 or 5 times the thickness of the prototype.

Accordingly, my very first recommendation with the “Blue Box” box car is to throw away this running board. Until after World War II, nearly all 40-foot steel box cars had wood running boards, and these are easy to model by replacement, with stripwood or styrene strip. Below is an example (with no corner grab irons yet installed, but some paint failure depicted).

After World War II, new box cars all received steel running boards, and gradually older cars got them too, whenever they were in the shop for any substantial work. This model, with its sharp-corner Dreadnaught end, is one of those cars that would later get a steel running board. There are lots of these available, from the nice Kadee molding, to several etched-metal versions from Plano and others.  Any one of them is greatly superior to the original Athearn kit running board.

I would immediately discard a second Athearn part that is so bad it really deserves a place in the all-time list of terrible freight car parts: the brake wheel. Not only was it almost always supplied unpainted, so its black color would jump out against almost any paint scheme, but it is a truly awful molding, greatly oversize (an HO-scale man couldn’t even get a hand around the huge rim), and an almost unrecognizable representation of the rest of wheel (was it supposed to be Ajax?). 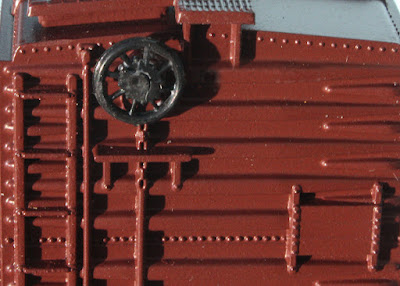 Tossing this part should be barely seconds behind tossing the running board. And just about any HO scale brake wheel in the history of the hobby would be an improvement, so choose what you like. Nowadays, I use the superb Kadee brake wheels. Years ago, I used the Walthers white-metal Ajax wheels, not great parts but an immense improvement over the Athearn part.

Before continuing, let me mention one more aspect of the Athearn end visible above: the brake step. It is very narrow, possibly due to molding limitation, and there are no diagonals supports below it. The width is easy to correct: just scrape the edge of the existing step to remove paint, use styrene cement to add a length os scale 2 x 4-inch styrene strip, then add diagonal supports underneath with scale 1 x 2-inch strip. Along with an ancient Walthers Ajax wheel, it can look like this: (you can click on the image to enlarge if you wish). 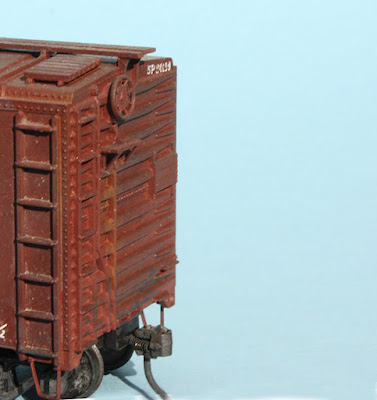 This is admittedly a minor improvement, and evident in the photo above are the cast-on ladders and brake staff. But the improved brake step catches the eye and distracts the viewer from the other defects. Note also that on the model above, I’ve replaced the very poor Athearn molded sill steps with A-Line metal steps. More on that later.

So if you do nothing else in making an Athearn “Blue Box” box car a little better, do replace the running board and the very poor kit brake wheel. You already have a better model and one that is less obviously of “Blue Box” heritage.