Most layouts include some kind of engine terminal, where such servicing as refueling, adding sand, and minor repairs could take place. Sometimes a very complete roundhouse or diesel shop is modeled. But however much or little is included, there are operational considerations. That is the subject of the present post, not the modeling of the terminal facilities themselves.

On my own layout, I have modeled the engine facilities for my mythical branch line, the Southern Pacific’s Santa Rosalia Branch, as including a roundhouse and turntable, along with fuel and water facilities for steam locomotives. This terminal, and many of its details, including work carts, fire hose boxes, and other features, were described in a Model Railroad Hobbyist article, in the issue for August 2017. That issue is still available to read on-line or download for your use, for free, at www.mrhmag.com .

The largest feature of this engine terminal is, of course, the roundhouse. I built the Banta Modelworks kit, which is an accurate representation of SP’s Port Costa, California roundhouse, and added a machine shop to the rear of the structure (see a description at: https://modelingthesp.blogspot.com/2014/01/shumala-roundhouse-part-3-machine-shop.html ). Here’s an overall view, with Consolidations 2575 and 2592 at the house. 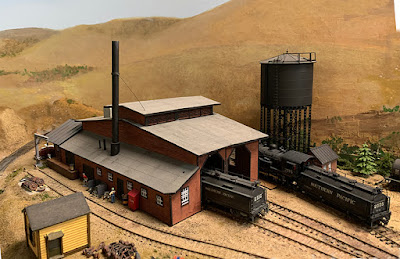 As you can see here, there are “garden tracks” on either side of the roundhouse, exactly as was the case for the prototype Port Costa house. The large steel water tank is a Harriman standard design, and was the source of water for the water column at the fuel spot.

For operating sessions, one could move locomotives into and out of the roundhouse, but in reality a hostler would perform those jobs, not a switch crew or road crew, so in my sessions, I have always had the locomotive that’s on duty today positioned at the fuel/water spot, thus freshly readied to depart.

Here is a view including the machine shop (added at left), and the foreground track is for deliveries of company parts and materials to the shop. 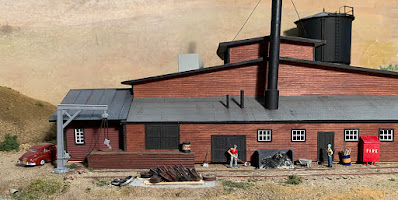 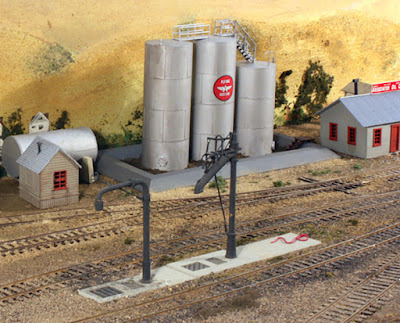 But of course an area like this is used for a number of inspections and last-minute adjustments of engines going into service. So more usually the area looks like you see below, with workmen, ladders, and work carts. This is an arriving engine, about to get the oil bunker topped off, and then to get the sand box refilled. SP 2829 is shown on the inbound engine track, and presumably already had its water compartment filled at the water column. 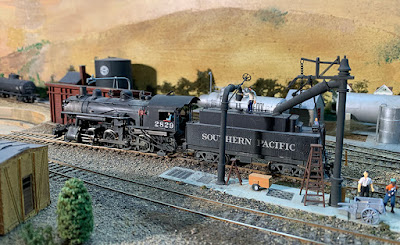 I have scratchbuilt a sand house for this terminal, following the SP standard plans, with dimensions chosen to fit my location. A description of that project was in a “Getting Real” column in Model Railroad Hobbyist, the issue for January 2021, in the Running Extra segment. It’s barely visible in the photo above; here is a closer view with a different inbound locomotive. 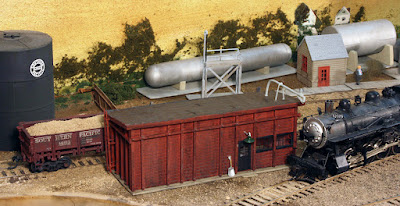 So in setting up an operating session, I pull the locomotive from the roundhouse, if it is not already standing at the service area, and move it to the outbound engine track. Normally it will be oriented tender-first, as that is how most crews chose to run outbound on the branch. There being no turning facility on the branch, one direction was always tender first.

A common situation at the opening of an operating session, then, is that the road locomotive is waiting on the outbound engine track (at left), while the switch crew is finishing putting the train together. In the view below, the switcher has just picked up a reefer that’s been pre-iced, and is about to tack the caboose and that reefer onto the rest of today’s branch local, waiting on the track behind the ice deck. Today’s road engine, SP 2829, stands on the outbound engine track at left, where the engine crew will take over from the hostler and bring the engine down onto the train. But before that can happen, the switcher will have to pull the entire branch train off to the left of the photo, so the engine can take its place on the head end.

I think it is useful in an operating session for a crew to understand that engine service is part of the preparation of a train, and they take control of their locomotive where it has been made ready for service, not just conveniently encountered at the head of the train, ready to go. So the foregoing describes what I do instead.