In the previous post on this topic, I showed the two improvements that ought to come immediately with any Athearn “Blue Box” 40-foot box car: discarding and replacing the brake wheel and running board. You can find that post at this link: https://modelingthesp.blogspot.com/2022/01/blue-box-upgrading-part-2.html .

Let’s now turn to the biggest visual problem with this model: the side door. On the prototype cars, the doors were practically the full height of the car side, as you see below on a Southern Pacific box car of 1937 AAR standard design (AC&F photo, SP collection). If you look carefully, you will see that the lower door track is actually below the side sill (you can click on the image to enlarge it). 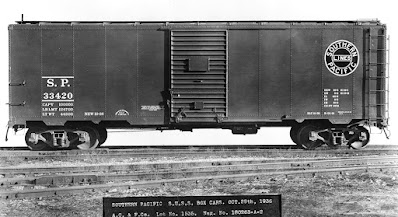 But the Athearn car is not like this. The reason stems from the design of the model. Athearn chose to place the car weight, a strip of plain-carbon steel, above the underframe, nicely concealing it from view, even at a slight upward angle from below. But that meant that the floor was on top of the weight, and raised up inside the car body, making the floor too high.

Athearn also chose to make an operating door, and of course the floor should be flush with the door threshold. To make that happen, Athearn simply made the door shorter. Compare this view to the photo above; the Athearn door track is well above the side sill, and of course the door is visibly too short.

(This model has the door “claws” removed — see more on that below — and wire grab irons and Tuttle sill steps added. )

In addition to height, other consequences of the working door (which, it must be said, is solid, sturdy and reliable), are an oversize top door track, and a really big ledge to serve as lower door track — plus the infamous Athearn “door claws,” which slide in the lower door track. The claws are evident below. 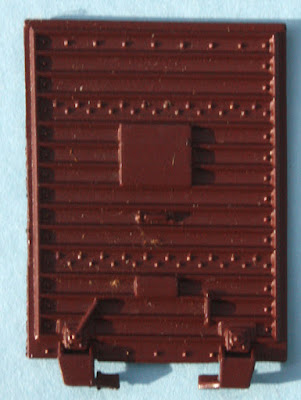 What to do? Removing the upper door track (and filling the body holes), then replacing with a piece of scale 2 x 2-inch styrene strip helps. The Athearn lower “door ledge,” as it is known, can indeed be carved off, but then you need to add the row of rivets where the ledge used to be, and paint. Not too bad a task with Archer rivets or equivalent, but more work. Then place another strip of 2 x 2 where the lower track should be. But this is getting to be a bunch of work for a car with almost no prototype.

Back in the day, when there were few good after-market HO scale boxcar doors, modelers used to carefully cut up two Athearn doors, and splice the piece together to make a correct-height door. Then make a mold, and you could cast as many resin doors as you wanted. More work, of course. Today, there are lots of accurate, scale-height doors, so you can just replace the kit door.

But what if you really don’t want to carve off the ledge, replace rivets, and find a new door? Well, the least you can do is to slice off the claws, making the door look considerably better, and slice off half the width of the door ledge. Of course, now you have compromised well beyond ignoring the model’s end with almost no prototypes, because the door on the car side is far more obvious.

But before I close, I have to mention a great irony in all this. Before the one-piece plastic body of the “Blue Box” kit, Athearn sold a metal kit for the same car. It actually had a correct 4/5 end for a 10-foot IH, and even had a correct-size side door. Here’s the end, and if the ribs lack some depth, there are at least the right number of them. The placard board is pressed into the end, but there are separate grab irons and (nicely made) ladders. 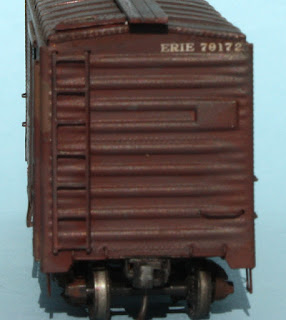 And here’s a side view. Compare to the prototype photo at the top of the present post. The door is pressed metal, so quite thin, and again, separate ladders, grabs, and sill steps.

Sigh. So Athearn really did know what one of these cars looked like. They just chose to do something else when they designed the plastic version so familiar in its Blue Box.