I recently received a fascinating suggestion: why not discuss the terribly familiar Athearn “Blue Box” box cars, of both 40-foot and 50-foot length. The questions would be these: what was the prototype of those models (if there was one), what can be done with them, and would it be worth the effort?

Let’s start with the famous box. It’s shown at right below, and sure enough, it definitely does have a blue color, with the predecessor Athearn box, used for many metal car kits, at left. 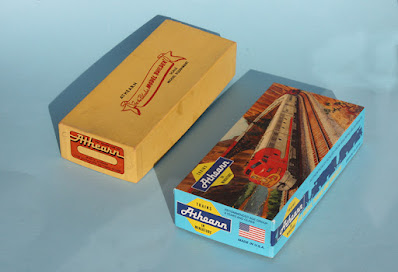 I’ll begin with the question, does the 40-foot model have a prototype? One way to answer that is to look at the car end. The model end is an early Dreadnaught design, and has sharp corners. Some will tell you that this makes the car an AAR 1937 standard box car. Well, let’s look at the prototype end first. The photo below is a Pressed Steel Car Co. view of an SP 1937 AAR car. 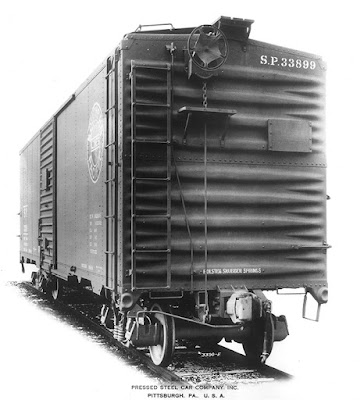 Note that the end has a 4/5 configuration, that is, 4 ribs in the top section, over 5 ribs in the lower section of the end. Now let’s look at the Athearn end. As you can see below, it’s a 5/5 end. How did that come about? The photo above shows that there really isn't room for a fifth rib at the top of the end. How did Athearn arrive at this end design? 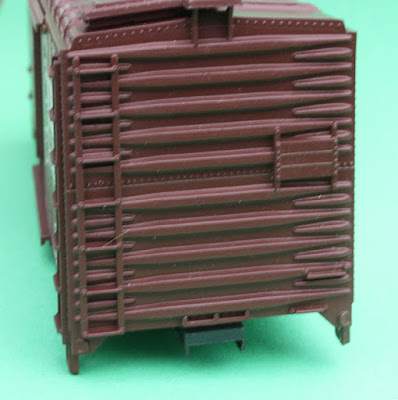 The standard 1937 AAR box car had 10 feet, 0 inches inside height (IH). The SP prototype car shown above has that inside height. But around the beginning of 1939, two railroads chose to buy 10 ft., 4 inch IH box cars, and they had sharp-corner ends like the Athearn end — and they had 5/5 ribs on their taller ends. Richard Hendrickson did exhaustive research on this and could only find those two railroad buyers, the larger of which was the Soo Line, the other one (which I’ve forgotten) was considerably smaller than the Soo.

It should be mentioned that at about the time of the Soo purchase, Standard Railway Equipment Co., maker of the Dreadnaught end, made an improvement, adding a W-section corner post to the car ends, and replacing the sharp corner of the 1937 end with a curved corner. So although it’s true that a fair number of 1937-type cars with IH greater than 10 feet were built during 1939–1942, they had W-corner post ends, not sharp-corner ends.

So yes, the Athearn car, just on the simple basis of its end configuration, has at least one railroad prototype. The model has a whole raft of other problems, but the main point to recognize is that of the many, many paint schemes applied by Athearn to this model with a 5/5 sharp-corner end, all but one (maybe two) are wrong.

Now I realize many modelers will say, “Hey, I don’t count end ribs, in fact I really don’t even look at car ends much, and I’m not impressed with this 5/5 story.” To which, I can only reply, I was just answering the question, does the car have a prototype? If you don’t care whether it has one, you may then want to read my following posts about various upgrades that can be done to this Athearn model.

Posted by Tony Thompson at 8:37 AM