From time to time I read, or hear about, someone’s layout Operating Plan. Of course this can be whatever you want it to be, from simple to complex, but I recently reviewed an online discussion on the topic, and thought I would offer a few thoughts here. These somewhat parallel and supplement a prior post on the topic (see it at: https://modelingthesp.blogspot.com/2018/09/thoughts-on-operation.html ).

Not much more than 30 years ago, you could visit a layout, as I did, and be told that the Plan for the evening was this: “Tony, you run the reefer block, and Carlos can follow with the coal train. When he gets in, I’ll run the passenger train.” And no, I’m not making this up. Of course, many layouts were different then, and even more are today.

I feel obliged to point out that fully 80 years ago, when the third printing of the 1942 book, How to Run a Model Railroad, by Al Kalmbach (writing as “Boomer Pete”), came out, there were already people making up timetables and detailed schedules, and trying to operate a layout in conformance to such Plans.  The cover shows how the serious model railroader would look: 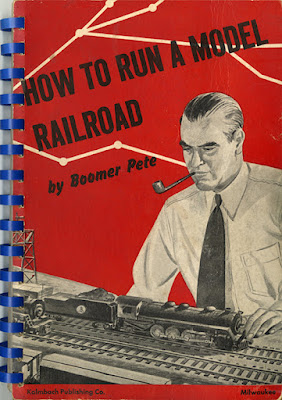 And only a few years later, the famous Delta Lines layout of Frank Ellison received detailed coverage in a six-part series in Model Railroader magazine (reprinted in 1965). Ellison and his operating crew were entirely serious and had a detailed scheme for running the layout. The Model Railroader issue for November 1955 contained a full article about a Delta Lines operating session. 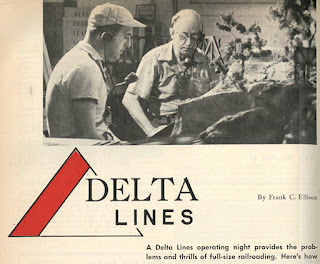 In the photo above, that’s Ellison himself at right, and operator John Kolp at left, each using a “cab” control panel for the trains they are each operating, carrying out a meet. Both wear headsets to permit talking to the dispatcher. The article shows numerous photos of operating positions around the layout, clearly comprising a complex and detailed operating session.

But the hobby continued to feature, as seen in innumerable photographs in Model Railroader and Railroad Model Craftsman magazines, the solo operator at his master control panel. To be sure, this permitted a layout owner to operate his entire layout himself; but it made it difficult to provide roles for visitors. This 1952 Kalmbach book cover is  good example. 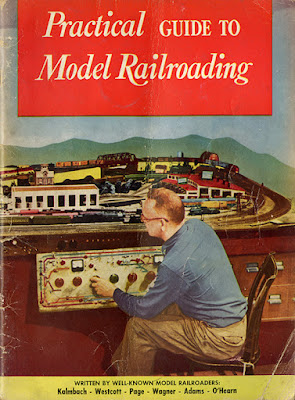 So obviously any Operating Plan has to reflect how the layout was designed and built. A layout with controls such as the one shown in the photo above is not going to work well for “walk-around” operation. Today, with DCC hand-held throttles in widespread use, it may be hard to remember how many years even the Frank Ellisons had a challenging electrical design problem for local train control.

That naturally leads to scenes like this one, from the cover of the Model Railroader issue for December 1950, showing the  layout of the Metropolitan Society of Model Engineers, in Union Station, Washington, DC. Naturally, all are wearing their engineer’s hats, and the man in charge at the master control panel has the obligatory pipe. 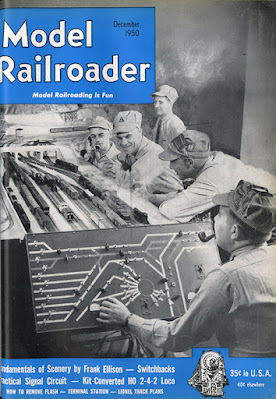 Now of course this is a posed picture and wouldn’t reflect any particular Operating Plan; but it is symptomatic of how model railroads were usually conceived and operated for a lot of years.

Any layout that was built primarily for operation (and let’s remember, many were not and are not — emphasizing perhaps scenery, or a display of structure or locomotive collections) still needs to have a Plan of how it’s to be operated. This can cover quite a range of options (including the “Tony, you run the ...”).

Probably the most comprehensive (and modern) source of discussions of operating  schemes is the book, A Compendium of Model Railroad Operations, published by the OpSIG (Operations Special Interest Group) in 2017 and still available for purchase at their website, https://www.opsig.org/assets/compendium.pdf . I reviewed this book when it came out (here’s a link to that post: https://modelingthesp.blogspot.com/2017/06/the-excellent-new-opsig-book.html ).

Starting with a prototype timetable can certainly work, even for a freelance layout, since it provides a framework for trains that operate. Inevitably our immensely compressed physical depictions of the prototype require compromises, but a prototype flavor can be achieved. Whether timetable and train order (T&TO), CTC, or track warrants, a prototype-based system of train authority contributes to realism. Handheld throttles permit independent action in such a system.

To sum up, I think the most productive approach to an Operating Plan is to try and reproduce railroad jobs — having your visitors take on specific railroad assignments, and operate according to prototype railroad rules and procedures. This is what one encounters at the various operating weekends around the country, which I greatly enjoy, and it’s what I try to do in planning op sessions on my own layout. If you haven’t thought about this, give it a whirl. There are lots of resources out there to help  — from the OpSIG book, all the way back to Boomer Pete.