In addition to the challenge in modeling the cars themselves that were used for the “Overnight” service, in their distinctive black paint schemes until 1956, there is an challenge in understanding how they were operated, referring of course to model railroads. The previous post described the car issues (see it at: https://modelingthesp.blogspot.com/2022/01/the-overnight-box-cars.html ).

The high-volume “Overnight” service was between Los Angeles and San Francisco, and of course, as the name indicates, was an overnight service. But other cities in California, Oregon and Arizona were also served. In addition, smaller cities along the lines were served by dropping off a car, from which PMT trucks could make efficient local deliveries. The ad below sums it up (from Journal of Commerce, Oct. 17, 1935, courtesy John R. Signor). To read the smaller print, click on the image to enlarge. 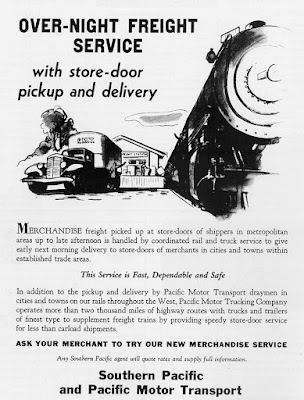 This 1935 ad mentions that local pickup and delivery were through local draymen working for Pacific Motor Transport, while trucking to other cites was by Pacific Motor Trucking (PMT). These entities were soon combined into one organization, PMT.

This was almost always an express LCL (less-than-car-load) operation, and SP promoted it that way. For a vivid illustration, the photo below shows an “Overnight” car being loaded in November 1938 at Los Angeles (SP photo N-1699-1, DeGolyer Library). Many of these items could be headed to multiple different merchants in the destination city. 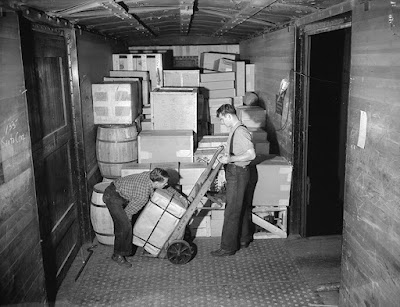 So for layout operation, unless you model the Coast Route main line, and can operate your layout in darkness, the natural environment of the full “Overnight” trains of black box cars, what parts of this service could you model? Obviously, you could model PMT trucks doing deliveries in almost any town in Oregon, California or Arizona, and I do that too.

For a single example, I have models of PMT trucks, mostly of the delivery variety, that appear in various places on the layout from time to time. An example is below, a van heading up Chamisal Road in my layout town of Shumala, at photo center. This likely has come from San Luis Obispo, some 25 miles distant, and is making a local delivery in the area. (The model truck was painted by Jim Elliot.) 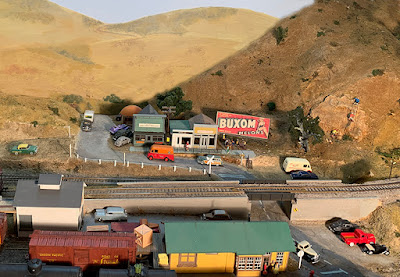 Of course, most of us want to model the rail part of the service. One possibility, though perhaps not terribly interesting, is that individual cars would occasionally be spotted for delivery outside the major cities (in my case, Los Angeles and San Francisco), and so might be headed back to one of those cities when unloaded and made empty. So an individual “Overnight” car in a passing freight, evidently empty, is one option.

A possible on-layout destination is the team or house track. I described this service in an earlier post (see it at: https://modelingthesp.blogspot.com/2015/10/operations-non-rail-served-customers.html ). This permits an occasional “Overnight” box car to be spotted on the layout, presumably with a single “hot” cargo rather than an assortment of LCL like the photo above of the boxcar interior.

Under that scenario, you might model something like the scene below, which shows an “Overnight” car on the house track in my layout town of Ballard.

My own conclusion is that scenes like the one above ought to occur relatively rarely, as most “Overnight” service, in the form of LCL, would be delivered by PMT trucks in areas away from major division cities like San Luis Obispo. But yes, I do occasionally have a local spot of an “Overnight” car in an operating session.