Getting the car you want, Part 3

As I described in the first post in this series, this project is to modify an existing kit so that I can produce the particular car number series that I want. In this case, it’s a Pacific Fruit Express refrigerator car of Class R-40-10, and the starting point is an InterMountain Railway Co. kit — an excellent kit in most regards. I did have to correct a warped body molding, as I showed in Part 2 (see that post at: https://modelingthesp.blogspot.com/2022/04/getting-car-you-want-part-2.html ).

Applying the kit detail parts to the body is mostly a straightforward task. But the InterMountain bracket-style grab irons, though a beautiful molding, are frighteningly delicate, and break easily even when cutting them from the sprue. And in service on the layout, they are occasionally damaged during operation. Luckily, I have an alternative: brass versions.

Over 25 years ago, Dennis Storzek (who works for Accurail) had some of these made, by the simple expedient of using styrene offset-attachments moldings as the masters in a “lost wax” process to produce sprues of brass ones. Richard Hendrickson obtained some of them, and Richard passed a few on to me. You can see them below. The “posts” that fit the holes in the kit body are there underneath, of course. Both side and end grabs are included.

Next I spray-painted the whole sprue black, cut what I needed from the sprue with side-cutters, and applied to the body with canopy glue. Meanwhile, I continued adding other side and end details to the car body.

I also added Kadee trucks and couplers, using the 2-56 holes already drilled and tapped in the car body, as mentioned before. These include cutting off the center posts of the coupler box lids, and drilling with a 2-56 clearance hole. I like this step, as the trucks give the model something to sit on when upright.

About this time, I decided to do the renumbering, as described in my first post (here is a link: https://modelingthesp.blogspot.com/2022/03/getting-car-you-want.html ). For this, I relied on the excellent Microscale set 87-501. (If you have an older version of this set, discard it and get the current version, superbly updated and improved by Dick Harley and entirely dependable and accurate.) Incidentally, you may note that the model has no placard boards or route card boards on the car side. As shown in the first post of the present series (see the link in the previous paragraph), prototype photos of the R-40-10 class show that the cars did not have these boards as built, nor were they applied in later years (for example, the 1946 photo in that post). Thus I have not applied any to the model.

One of the “Achilles heels” of kits like this is the delicate and good-looking sill steps, which however are correspondingly fragile. I managed to install all four of the corner steps as kit parts, but first one and then another broke, despite efforts at careful handling. The answer is simple, A-Line Style A steps, for which I drilled holes, installed with canopy glue, and painted black. Here is one of them before painting. 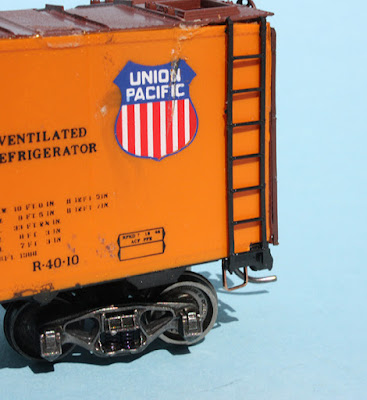 Finally, I will apply the roof details, including decisions on the ice hatches, but I will describe that process, along with weathering and finishing, in a future post.

Posted by Tony Thompson at 4:52 AM