In the preceding two posts, I touched on the issues of waybill design that can help operators not familiar with a layout to understand what they need to do. In the immediately preceding post, I showed some examples of assistance in the form of color blocks or stripes or coding (see it at: https://modelingthesp.blogspot.com/2022/05/wayills-part-97-waybill-roles.html ). Now I want to explore some more subtle options.

First, I can show another idea that was tried on McGee’s layout. Here we added a color letter, more subtle than a strip or color block. In the waybill below, derived closely from the prototype waybill, you will see it contains a red letter “E” in the lower part. This denotes movement eastward (by Southern Pacific railroad direction, away from San Francisco). In the system of which this bill was planned, all such codes are red, and the letter indicates how the car is to be moved. Again, not prototypical, still an extraneous code, but a minimal intrusion on the waybill. 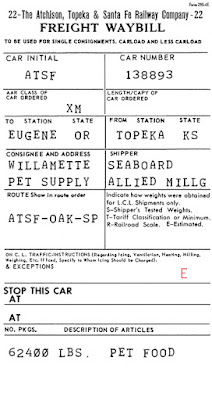 This is at least subtle, but still involves adding a non-prototypical element to waybills, which some don’t want to do. What else might work?

I have talked to a couple of modelers who didn’t want to add non-prototype codes or colors but simply relied on basic geography. Let’s say your layout is set in central Ohio. You can assume any visitor knows that Denver and Seattle are westward destinations, or Philadelphia eastward. Meanwhile, avoid small Ohio cities that are off-layout but their direction would only be known to relatively local people, such as Findlay or Steubenville: are they east or west?

One way to implement such an approach would be to choose simplified geography, and make a map for guidance of visiting operators. Below is the map I made for this purpose on Otis McGee’s layout. The layout does diverge in the northward direction (Southern Pacific railroad east) into two routes, as shown. Yard work at Dunsmuir has to divide arriving cars for trains destined to the two routes. 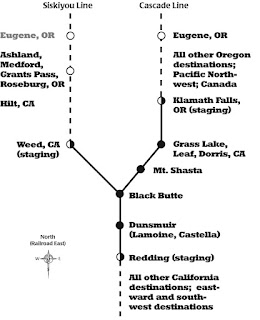 Note that all three branches of the map identify specific towns that may be found on waybills, and also includes the notation, “all other Oregon (or California) destinations,” so that a waybill for an Oregon or California destination not listed can be correctly assigned.

Or you could do as Bob Hanmer does, which is to use station codes. These of course are opaque to visitors, but a simple chart tells them what they mean. The red arrow below shows the station code, Y195, something commonly done on prototype waybills and thus no intrusion on accuracy. This waybill is derived from the Steve Karas system, which is called “Flexbill.” 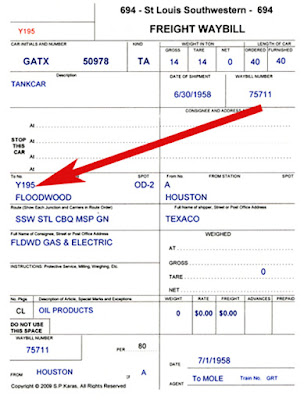 These are only a few examples of ways layout owners have used complex-looking waybills, but with some “help” addition to make it easier to use. I personally like the approach of avoiding colors or codes (except maybe Frank Hodina’s clever use of the “service paster”), and prefer to try and avoid any unnecessary complexity in the waybills.