This spring, with the pandemic at least less evident, regional conventions of the NMRA (National Model Railroad Association) have resumed in many parts of the country. Not long ago, I wrote about attending a convention of that kind in my home region, Pacific Coast Region (you can read that post at: https://modelingthesp.blogspot.com/2022/04/pcr-2022.html ). Last week I attended another, that of an adjoining region, Pacific Northwest Region (PNR). It was held in Eugene, Oregon.

Because PNR is nearby, I have attended a number of their conventions, and thus know a fair number of people in the region. This makes it fun to attend, and this iteration, even though sparsely attended in comparison to pre-pandemic events, was enjoyable. I also gave two talks, one of them a new clinic, whose handout was posted recently (the handout is available at: https://modelingthesp.blogspot.com/2022/05/handout-layout-operations.html ).

One of the pleasures of this convention was a reunion with an old friend, C.J. Riley, who I first met 45 years ago when we both lived in Pittsburgh. Together with the late Larry Kline (see my remembrances of him at: https://modelingthesp.blogspot.com/2014/04/in-memoriam-larry-kline.html ), we formed a tight group of three, not only traveling to NMRA conventions together but getting together weekly for operating sessions or work sessions on our three layouts.

As it happened, C.J. was giving a clinic at this PNR convention, on the subject of his recent Kalmbach book about scenery and detailing techniques. It’s a fine book and I recommend it highly; he had copies with him and sold a fair number to clinic attendees. (For a review of the book, see this: https://modelingthesp.blogspot.com/2020/05/riley-layout-book-published.html ). Below is C.J. at right, with the first slide in the clinic. 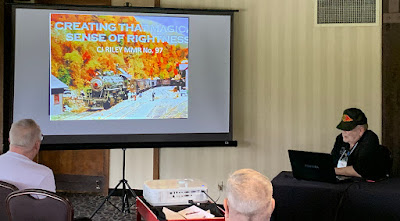 There were some excellent models in the contest room at this convention. A number of them were fine models that were shown for display only, not contest entries. One of them was Greg Kujawa’s very nice box car, SP&S 13421, which was well rendered with weathering, chalk marks and route cards. 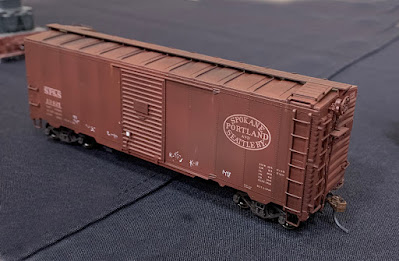 The contest entry that impressed me the most was Ted Kruysman’s Southern Pacific dome car, SP 3600, partly because he had to do an awful lot of work. He started with a Rivarossi passenger car, filled almost all the windows, and cut into the roof so that parts of a two Life-Like domes could be inserted. He then cleaned up the body and repainted, also adding working diaphragms, and passengers inside. Very nice workmanship and a polished final product. 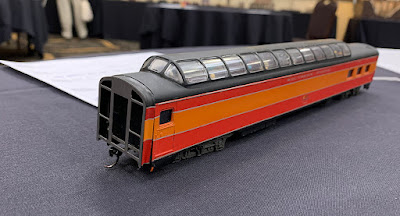 Lastly, I enjoyed the HO scale sectional layout set up by the South Rogue Model Railroad Club, led by Dave Olsen and Bryan Orisen. It’s quite large, filling a lot of a hotel ballroom. Though it wasn’t possible to photograph the whole thing, here’s a view from one corner. Having once been part of a modular group, I admired their scenicked return loops, each comprising several sections. Just visible near the door at photo center is one of their signature scenes, a bascule bridge section. 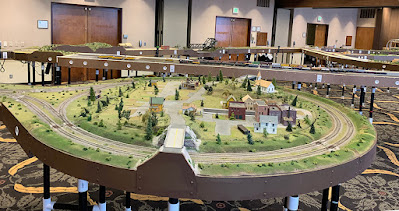 Here’s a close-up view of this operating bridge (they raised it from time to time). Nice attention-getter! 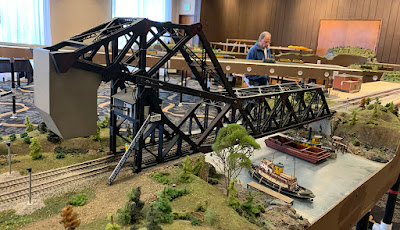 Like I almost always do, I enjoyed attending and participating in this regional convention. And I’ll repeat my frequent suggestion: if you have never been to one of these, you ought to give it a try.