I have posted a few commentaries on trying to achieve accurate diesel power for my 1953 Southern Pacific layout. In particular, I want to have the right diesel paint schemes and the right prototype bodies. My introduction on this point was back in 2011, and it may be helpful background (see it here: https://modelingthesp.blogspot.com/2011/03/modeling-diesel-locomotive-chronology.html ).

My topic today is the SD7 model from Electro-Motive. This was EMD’s first roadswitcher. In 1952, when SP first ordered SD7s, they already had several years’ experience with Baldwin 6-axle roadswitchers, and were ready to seek out roadswitchers with more dependable engines and less-rigid trucks. (All over the SP, track maintenance people fumed about the Baldwins.)

As well summarized by Joe Strapac in Volume 4 of his magisterial series, Southern Pacific Historic Diesels (Shade Tree Books, Bellflower, CA, 1997), in April of 1952 SP decided to try other manufacturers of roadswitchers. They ordered 23 of Alco’s RSD-5 model, and 15 of the then-new EMD SD7. Both models were quite new on the market, so SP’s dissatisfaction with the Baldwin product is evident.

In all, SP would purchase 43 of the SD7 model before transitioning to the SD9 model in 1954. All were delivered in what is termed the “Tiger Stripe” scheme, orange stripes and lettering on a black body. Here is an EMD photograph of SP 5280 before delivery, part of the first group delivered (SP 5279–5293). 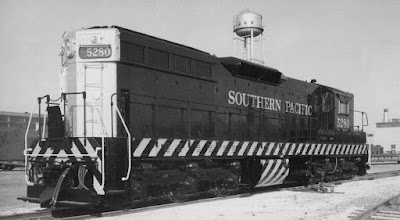 Most of these SD7s were intended for use on the Northwestern Pacific, and were moved there upon delivery. But in the summer of 1953, a final group of 20 SD7s (SP 5316–5335) was delivered with steam generators. These were intended as relief passenger units, but were also tried out around the entire Pacific Lines system to see what they could do.

By December 1953, SP had decided that roadswitchers were really more road engines than they were switchers, and the switcher-related Tiger Stripe scheme began to be replaced with the familiar “Black Widow” scheme used on F units. The tendency was to repaint units whenever they were in the shop for enough time to do the job. Below is a photo of SP 5324 at West Oakland on a freight train (John E. Shaw photo). 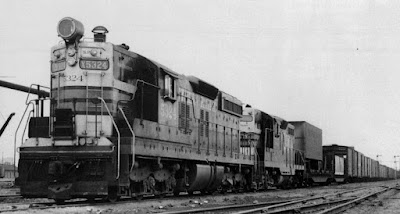 A noteworthy feature of the passenger-equipped engines was the large Mars signal light atop the hood, often called an “ash can” by railfans and modelers.

For my modeling of the Coast Division in 1953, the SD7 ought not to show up very often (nearly all of them were working on the NWP), but the system-wide tryouts mean that I can operate one occasionally. Below is a photo of SP 5280 in its original paint scheme, heading a westward freight on the Coast main line on my layout. 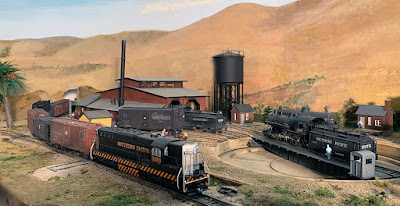 Whether the Black Widow-painted SD7 units ran on the Coast, I don’t know, but I do have a model, SP 5324, that is used occasionally, shown here just approaching Shumala on my layout with an eastward freight. 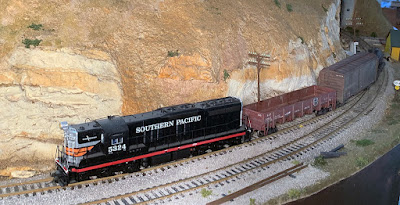 The SD7 is an often overlooked diesel series, and in fact EMD only built 188 of them; but SP purchased 43, as mentioned above, fully 23 percent of the total, well above than any other railroad. Of course, the introduction of the SD9 in January 1954 led to far greater sales, including to SP; but that’s after my modeling period.

The transition-era SP motive power on my layout only includes the SD7 as a sidelight, but it is definitely part of the history

Posted by Tony Thompson at 9:45 AM