Getting the car you want, Part 4

This series of posts is about modeling a car from a specific number series within the Pacific Fruit Express Class R-40-10 refrigerator cars, 4700 cars built during 1936–37 and numbered 40001–44700. The InterMountain Railway Co. kit I am building has been renumbered and details modified in previous posts (see the last one: https://modelingthesp.blogspot.com/2022/05/getting-car-you-want-part-3.html ); prototype photos were provided in earlier posts in the series.

In the last installment, car body details wee complete, except for the roof. The first decision to make about the roof is the ice hatches. The original fabricated steel hatch covers remained on many cars throughout their lives, but when needed, they were replaced in many cases with the later-design one-piece formed steel hatch covers.

Below is a photo clearly showing these hatch covers, though the car shown is from the later Class R-40-23, obviously with a Morton running board, and with the dot over the reporting marks that designated the presence of fans. The photo is from General American, author’s collection. 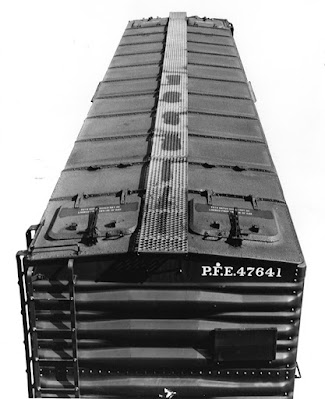 Partly because the molded hatch covers in my kit had warped (and were brittle, thus not straightenable), I decided to replace them with the formed steel variety. I had some in my parts stash, I think made by Red Caboose, and nicely including the short hand grabs on the inboard side of the hatch (see photo above). I applied these to the roof, followed by the corner grab irons, the running board (with scribed board divisions added), and end running board supports, latter two things attached with canopy glue. I also applied the hatch cover latch bars from the kit (note how prominent these are in the photo above). 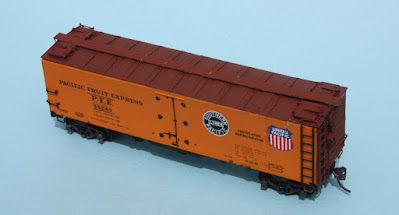 Next came weathering and finishing. I gave the car a final coat of flat finish, then turned to my usual techniques with acrylic tube paints, applied as washes. (For more detail on all that, see my “Reference pages,” linked at the top right of every blog post.) The car at this point is shown below. Note that during the application of washes, I used a Q-tip to “wipe clean” the reporting marks.

Next I added a patch of clear gloss at the points that would receive a reweigh patch, then added the paint patch with a small rectangle of orange decal. Then old Sunshine reweigh lettering was added.

Lastly, a route card was added on the route card board on the bolster end at the left of each car side, and a few chalk marks were added with white Prismacolor pencil. A final dusting with flat finish, and the car was ready for service. (You can click on the image to enlarge it if you wish.) 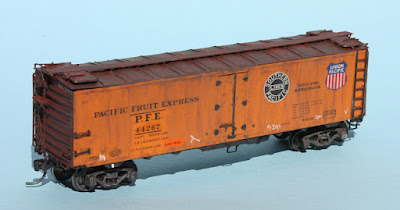 This was a simple and fun project, upgrading and renumbering an otherwise standard kit, while making some decisions about age of the paint scheme, etc. The car will definitely be active in my next operating session.