One of the least common freight cars in the national fleet in 1953, the year I model, was flat cars. However, it’s important to realize that this varied greatly by region, and Southern Pacific handled huge quantities of lumber shipments in that period, which explains the large SP flat car fleet.

To illustrate, here are bar-graph representations of the national car fleet (left) and the SP car fleet (right) in 1950. Both graphs show the car types in same order, in order of descending size for the national fleet, then in the same order for the SP fleet to dramatize its differences. Note that flat cars made up 9 percent of the SP fleet, while nationally, flat cars were just 3 percent. (You can click on the image to enlarge it, if you wish.)

As part of a multi-post effort back in 2011 to present all of my car fleet plans, separated by car type, my fleet plan for flat cars is at the following link: https://modelingthesp.blogspot.com/2011/02/choosing-model-car-fleet-5-flat-cars.html .

It’s interesting to look back at that 2011 plan and note that I only had two special-use flat cars, a depressed-center car (AAR FD) and a 4-truck car. The balance were 20 “general service” cars, AAR Class FM, though 5 of those 20 were unbuilt kits and five more were stand-ins, due for replacement.

Today the number of unbuilt kits has risen slightly (though not the same ones!), most of the stand-ins are gone, and there are a number of new cars. And today my overall fleet of flat cars is about 7 percent of the total fleet, probably about right for SP in 1953.

In that 2011 post, I noted that lumber was a major category of flat car loads for SP in the 1950s, and I’ve posted several descriptions of such loads I’ve built for these cars (see for example: https://modelingthesp.blogspot.com/2014/08/open-car-loads-completing-owl-mountains.html ), or one of my posts about the lumber loads that Richard Hendrickson built, and which I inherited (available at: https://modelingthesp.blogspot.com/2015/06/richard-hendricksons-lumber-loads.html ).

I also described, in a later post, the variety that ought to be present in lumber loads, as to both height of lumber stacks, and size of lumber in the stacks. These aspects of course varied from carload to carload (that post can be found at: https://modelingthesp.blogspot.com/2019/07/more-about-lumber-loads.html ).

Thke latter topic is only one part of the broad subject of open-top car loads, about which I have written frequently; to locate any of those posts, I would recommend using “open-top car loads” as the search term in the search box at the upper right corner of this post.

I continue to enjoy open-top cars, of course including flat cars, because of the variety of loads they can carry. An example is below, a car and load currently operating on the layout, an ancient Athearn 4-truck car (not really quite correct, but . . .) with a large casting load (for more on the load, see https://modelingthesp.blogspot.com/2020/06/blocking-for-big-loads.html ). 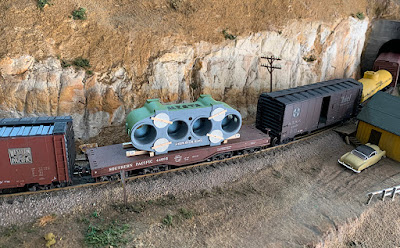 Most of my loads, including the one shown above, are removable, permitting their use on a variety of flat cars (or, in some cases, also in gondolas). For another example, this short girder, braced according to the AAR loading rules, is shown on the Pennsylvania F30A flat car I recently discussed  (https://modelingthesp.blogspot.com/2022/05/the-new-rapido-pennsy-flat-car.html ). Background on the girder load can be found at this link: https://modelingthesp.blogspot.com/2012/03/open-car-loads-poles-and-girders-in.html . 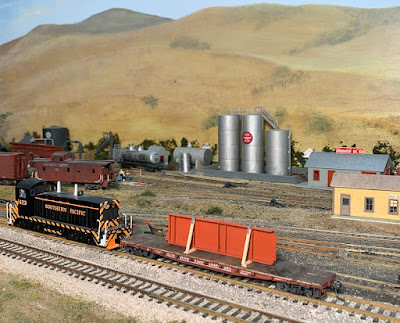 Flat cars remain, as they should, a minor part of my overall freight car fleet, but I think my earlier 2011 goals for sizes, types, and railroad name variety are being met.

Posted by Tony Thompson at 1:30 PM