Throughout the pandemic, my granddaughter has visited us from time to time, and she really likes to operate on the layout. We usually set out one of the Accurail cars that I helped her build, and that belong to her (for links to earlier descriptions, see: https://modelingthesp.blogspot.com/2020/07/pandemic-operating-sessions.html ). Currently she is in Berkeley for two weeks of summer camp, and we had the chance over the weekend to operate again.

She’s now ten and a half, and increasingly can understand waybills and figure out how to use them to plan switching moves in a session (so much for the adults who claim it’s just too complicated . . .). By now, I can set up as many cars for her to switch as would be the case in a  typical adult operating session. As you see below, at the beginning of the session (at Shumala for this version), the waybills were leaned up against the cars to make sure all were identified. 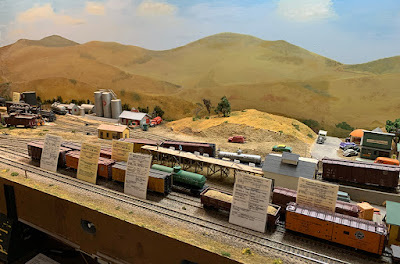 Then began the work of doing all the switching that was called for. First step, bring out the switcher from the engine terminal service area. Here she is doing that, and shortly will be removing all the waybills from the layout surface. I don’t mind waybills set out this way before the session starts, but don’t want the bills on the layout, once operating begins. 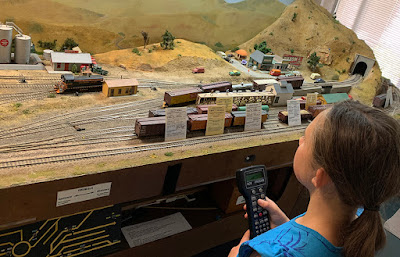 Next she planned out how the car order in the working string should be, and carried out a run-around by the engine to get that started, moving down to the far end of the Shumala siding. She’s quite skillful by now with the NCE throttle, including use of horn and bell. 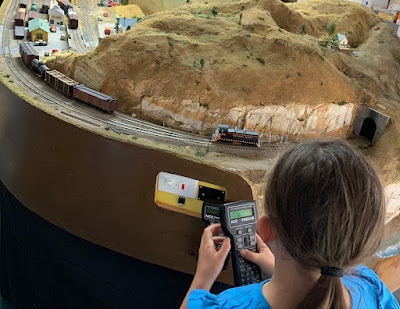 She worked steadily through all the switching, step by step, with only a few false moves. In the photo below, she is nearly finished, just about to complete a move to the house track at the depot. 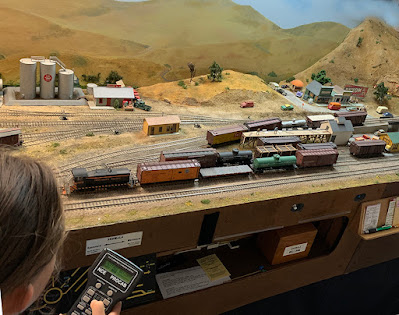 It’s always fun to have an enthusiastic operator, and I know she enjoys doing this stuff. Hopefully her interest will continue. And of course I enjoy seeing the layout used as I had intended it to be.

Posted by Tony Thompson at 9:29 AM