Most years when I attend the Bay Area Prototype Modelers (BAPM) meet, I fill up my carrying case with freight cars, plus a locomotive and caboose, to make a display of a complete train. I think most people enjoy seeing this kind of “larger” display. My previous post about the models displayed by other modelers at BAPM 2022 is here: https://modelingthesp.blogspot.com/2022/06/bapm-2022-part-2.html .

Again this year, as I often do, I chose steam power for the display, and SP Consolidation 2763 was on the head end. You will note alongside this engine is a description on a paper slip, and something similar is alongside every car in the train: a brief line identifying the prototype, and another line or two giving model information. (You can click on any image to enlarge it if you wish.) This is a Balboa brass model.

The first car in the train, as was often true in prototype practice, was a stock car, SP 73557, a Red Caboose model with correct Vulcan truck replacements. 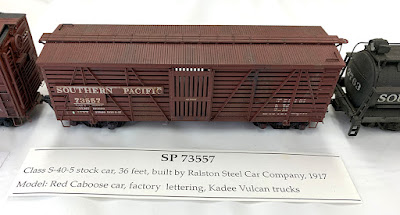 Following the stock car was a Santa Fe automobile car, recently demoted from actual automobile service (note on the right-hand door that the identifying white stripe for that service has been painted out). I described my completion of this project of Richard Hendrickson’s in a series of prior posts (here’s the final post: https://modelingthesp.blogspot.com/2018/11/hendrickson-auto-car-part-6.html ).

Next in the train was an SP tank car, one of those modified, and suitably identified, for liquid sugar service, primarily from the C&H Sugar plant at Crockett, California. This is one of my Athearn kitbashes (for a description, see: https://modelingthesp.blogspot.com/2011/05/modeling-sp-tank-cars.html ). 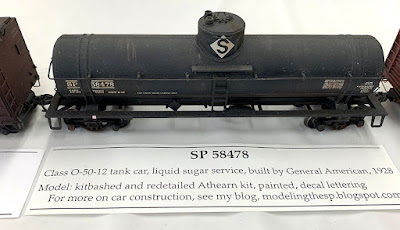 Following the tank car was a Pennsylvania Railroad Class X29 box car, one of the most common box cars in America in the transition era. (I didn't notice until I got there that the brake wheel was missing!) The heavy weathering here is by Richard Hendrickson. 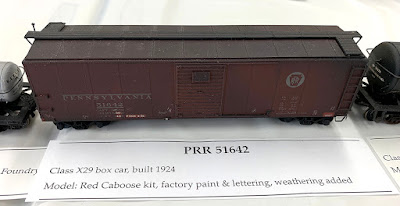 Behind the X29 was another tank car, this one modeled with a scratchbuilt tank and dome on a modified Tichy underframe (this project was described in a Railroad Model Craftsman article from January 2012; for more, see this link: https://modelingthesp.blogspot.com/2011/12/new-tank-car-article-in-rmc.html ). As its lettering states, it’s assigned to carry hydrogen peroxide. 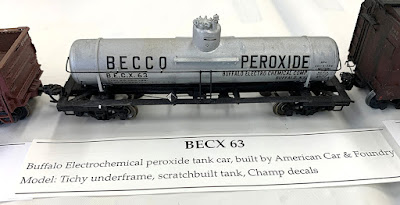 And to wrap up today’s part of the train, here is the sixth car in the train, a classic HO scale model, the Ulrich General Service gondola, in this case with improved trucks and new lettering. There were a lot of these cars on the SP, and they were very durable, many serving into the 1960s.

I will show the rest of the cars from my BAPM 2022 train display in a future post.

Posted by Tony Thompson at 9:36 AM