This post is about including cab aprons on model steam locomotives. So what the heck is a cab apron? (I hear you mutter.) For railroad terminology, I go to the Cyclopedias, in this case the Locomotive Cyclopedia for 1925, the 7th edition published by Simmons-Boardman. On pages 108 and 109 are a drawing of a generic Mikado (2-8-2) steam locomotive and the names of 324 different components of the locomotive.

Below I show just the cab portion of this drawing. Note at the right edge of the cab that an item 211 is called out, Below the drawing I show the entry in the list of names, for no. 211. It’s the cab apron. This is a steel plate, hinged at the cab edge, which provides the walkway between engine and tender. Attached to only one of them, it allows the tender to move relative to the locomotive, for example in curves, while maintaining a walking surface over the gap. 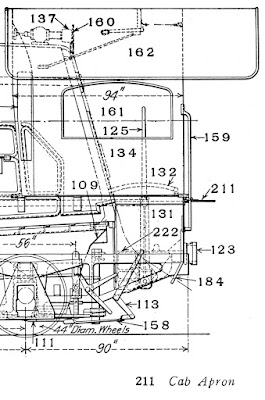 This part is needed in model steam locomotives in particular, because we typically couple locomotives and tenders at considerably greater distances than the prototype (because of our far sharper curves in model track). Below is an example of such an apron, in this case on a Key brass model of an SP Consolidation. The apron is brass, and has masking tape underneath to ensure against electrical shorts. When an apron is not included in the model, it certainly emphasizes the gap between engine and tender, as you see below on SP 2575, a Sunset model of an SP Class C-9 Consolidation with a whaleback tender (shown on the turntable at my layout’s Shumala engine terminal). We normally view our models from a somewhat overhead perspective, making these gaps more obvious. 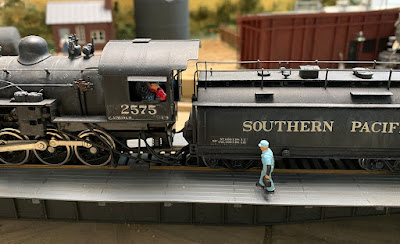 To add aprons like this, I have usually used sheet styrene, 0.010-inch thickness, though the exact thickness isn’t important. Styrene gets you away from the electrical risks of a brass apron. I have just used ordinary Scotch mending tape to form a hinge underneath the apron.

In HO scale, a locomotive cab is about an inch wide, though each individual cab has to be examined to see where the apron should be located. Usually the gap is around a quarter-inch. I usually make the apron a bit wider than that, maybe 5/16-inch. They are painted flat black.

Below are some examples of various aprons I have made. The one at upper left, with rounded corners, is the design I mostly use. The two bottom examples have diagonal corners of different size. All are an inch wide and roughly 5/16-inch high.

With an apron like the rounded-corner one shown above, I corrected the appearance of SP 2575, pictured above on the turntable. Here it is with its styrene apron. 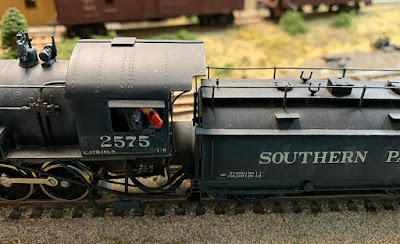 Though these aprons are a detail, and a model one at that, since on the prototype they are quite narrow, I really think they improve appearance. And like so many “errors,” once you have noticed them, it becomes impossible to “not see” them. I’ve enjoyed adding aprons to my locomotives that didn’t have them.