In July 1906, Southern Pacific completed a passenger coach with an all-steel body, the first such car in the United States. Almost immediately, the Associated Lines (as the Harriman-directed combined operation of Southern Pacific and Union Pacific was usually called) ordered hundreds of new steel cars, designed very much like that pioneering coach.

The cars had a high arched roof (often called a “Harriman” roof) and wide windows. They were 60 feet long, according to the SP standard nomenclature: meaning 60 feet over end sills, and rode on four-wheel trucks. Below is an example of the early cars, SP 1838 (Pullman photo, November 29, 1909, Clark Bauer collection).

I won’t go into the history in any detail, both for lack of space and because it is already available in complete form in Volume 1 of the superb  series, Southern Pacific Passenger Cars, entitled “Coaches and Chair Cars” (SPH&TS, Pasadena, 2003). But here are the main points. By 1911, a total of 395 coaches like the photo above had been delivered to the Associated Lines, of which 219 were for SP Pacific Lines, and 35 for T&NO (remainder for other Associated railroads).

Let me describe an important spotting feature, the roof ventilators. SP had adopted the Globe ventilator for these cars, a round “mushroom” shape, and the first groups of cars had ten of these ventilators in a single row along the centerline of the car roof, like the car shown above. Subsequent orders for these cars had instead two rows of eight Globe ventilators each. In the 1920s, it appears that most cars with single ventilator rows had them replaced by double rows.

Good roof shots seem uncommon, but below is a 1943 photo in the yard at San Luis Obispo (San Luis Obispo County Historical Museum). The double row of ventilators is well shown, as are the electrical conduits installed for electric lights and fans. On many cars, these conduits were removed when replaced with internal ones; on others, they remained in place for years, 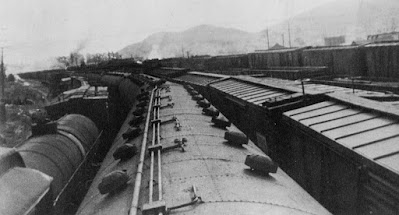 Way back in the day — maybe 50 years ago — there were only two choices for Southern Pacific classic-era round-roof passenger cars: the Model Die Casting (MDC) plastic kits, and the Ken Kidder brass car bodies (in the earliest days, they came without trucks or even floors). Both had their shortcomings.

The MDC car roofs have enormous, HO-grapefruit-size rivets and are one window short, having seven instead of eight windows. This likely resulted from MDC not understanding the meaning of an SP 60-foot car: that is not the total car length, but the length over end sills, which were at the inner wall of the vestibule at each end. So the cars are a little too short, and are missing one window.

Below is a photo of an MDC car I built, having shaved off the huge roof rivets and installed not only the correct double row of 8 Globe ventilators, but the small vents over the toilets at each end (see lower photo of roof). Window shades were added too. In isolation, a car like this is not too visibly wrong, but I rarely operate it.

The Kidder cars are better looking overall, being the correct length and window pattern. The roof contour is not quite right, though not terribly evident, but a more visible flaw is the odd patterns of roof-top ventilators. There are Kidder cars with double rows of Globe ventilators, advertised as Illinois Central cars, but there are eleven of them. There is also a version with the single row, but nine instead of ten ventilators. Here is a double-row car.

And for comparison, here is a single-row car, probably a little unlikely by my modeling year of 1953.

Of course in passing trains, most viewers are not counting ventilators, so these differences are not glaring. But the meticulous passenger equipment modeler (which I confess I am not) would not accept these problems, and would likely either remodel the roof with correct ventilator numbers, or would use another model product to represent these cars. I do include the Kidder cars occasionally in passing trains.

In a future post, I will address some other reasons for my interest in Harriman-era coaches.