My train at BAPM, Part 2

Last month, the annual series of Bay Area Prototype Modelers meets (BAPM) resumed after a pandemic hiatus. I attended and as always, greatly enjoyed seeing the models displayed by other attendees (for some of the highlights, see this post: https://modelingthesp.blogspot.com/2022/06/bapm-2022-part-2.html ).

As I usually do when I attend BAPM, I brought an entire train to display at the 2022 meet. The first half of the train was shown in a prior post (here’s a link: https://modelingthesp.blogspot.com/2022/07/my-display-train-at-bapm-2022.html ). The present post continues with the remainder of the train.

The last car shown in the post just cited was an Ulrich Southern Pacific GS gondola. Behind it in the train was this 4-truck flat car, SP 44095, with a very large load, a steel casting from Mesta Machine of Pittsburgh. As I noted in the information slip next to the model (below), this load was produced by Multiscale Digital LLC (visit them at: https://multiscale.digital/ ). For my modeling, see: https://modelingthesp.blogspot.com/2020/05/impressive-flat-car-loads.html . 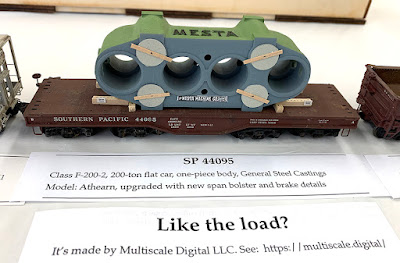 Following that car was this SP covered hopper, weathered to show that it’s been in cement service. It’s an InterMountain ready-to-run model of a fairly new car in my modeling year of 1953. 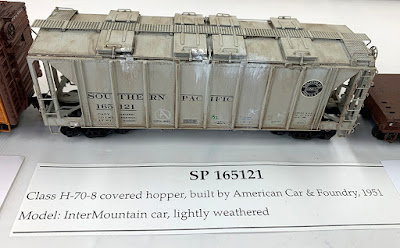 The next car in the train was this PFE reefer, a member of the large R-40-23 class, repainted into the post-1952 paint scheme. It’s an Evergreen Roundhouse custom-decorated Athearn kit with some detail upgrades. 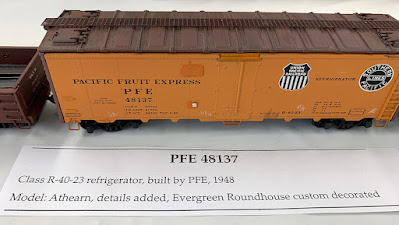 Behind that car was this one, P&LE gondola 40205, built from a Proto2000 kit. Its load is Evergreen H-columns, painted to resemble bare steel, a common type of load in this road’s gondolas.

The next car in the train was a helium car, still in U.S. Navy service at this date, USNX 1031. The model is an extensively modified AHM car, with decals from Jerry Glow and (on this side) an Empty placard. I posted about this model previously; see: https://modelingthesp.blogspot.com/2012/11/helium-cars-part-3.html . 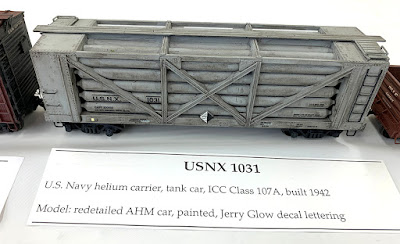 Following that car was the last freight car in the train, a Cotton Belt rebuilt box car, with some of the distinctive Little Rock Shops work in modifying the ends for an increased-height car. It was built from a Sunshine resin kit. 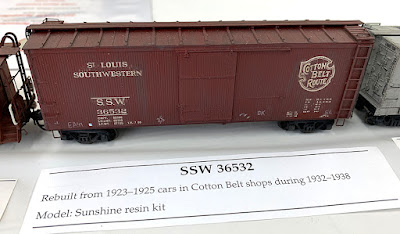 Finally, of course, came the caboose, and like the locomotive, it’s a Balboa brass model, SP 1205, a steel caboose of Class C-40-3. 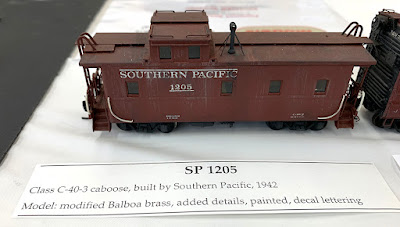 And just to show the full scope of all this, here is an overview of the whole train, locomotive at right:

It is fun to pull together a selection of cars for a train like this, and to decide how to make up the information slips that will convey to viewers what the model is, and what it is intended to represent. I had fun doing it this year, and expect to do so in the future, too.

Posted by Tony Thompson at 9:24 AM