In my first post (see: http://modelingthesp.blogspot.com/2014/12/building-resin-box-car.html ), I described the kit being built, a Speedwitch Media one-piece body kit for a CB&Q Class XM-25 box car. I also showed my completion of what I call the “mechanicals” phase for kits, meaning truck and coupler attachment method and also car weight.
My second phase is adding all the details to the model. The Speedwitch kit directions suggest detailing the underframe first, and I did so, using a Tichy AB brake set instead of the kit parts, as I personally like the Tichy rendition better. I used styrene pieces (scale 4 x 4-inch and 1 x 8-inch) for supports of these brake parts, as the kit directions suggest, and made my own brake levers from scale 1 x 6-inch styrene strip. Here is the underbody with these additions, prior to adding brake rods and piping. In this first view, you can just see the steel nuts underneath, used for car weight (see Part 1).

A view from the other side of the car may show some details better. Note that the bolster cover plates are not yet applied.

These steps are easy to do, but there is some waiting for glue to fully set between steps. My practice in such cases is to work on another part of the model. The kit directions in most cases need not necessarily be followed as to sequence. I knew that drilling the holes for all the wire grab irons would be time-consuming, so I did batches of holes between various steps in building the underframe.
I know drilling small holes like this can be intimidating. The next photo shows my favorite pin vise for this kind of work, because the wood knob is comfortable in the palm, and it rotates freely as you drill. I’ve had it for years, though I don’t know the brand. That’s a No. 77 drill in the chuck (you can click to enlarge).

In use, one just locates the place to be drilled very carefully, or perhaps makes a starting mark with a pin or scriber, then drill the hole. 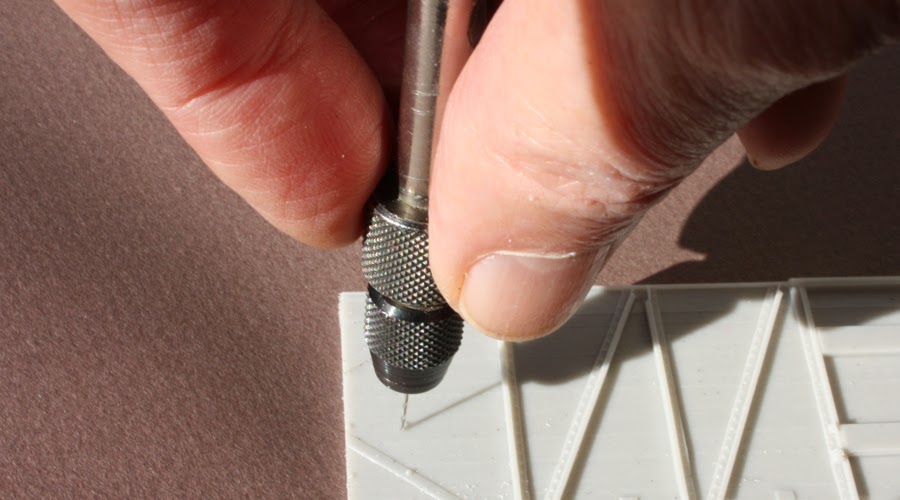 I mostly use a pin vise for this kind of drilling, but when the sheer number of holes gets daunting, I sometimes use a motor tool, a Dremel or an ancient Revere (which has a three-jaw chuck, not a collet system), for this job. And I usually drill the holes a size or two larger than the size that would be needed to just fit the grab iron diameter. Saves a certain amount of cursing later.
With many though not all grabs installed with CA, here is a view of the car body, so far without roof details or doors.

Note that there is no placard board on the car end, nor is there any mention of such a part in the kit directions, nor is there even any such part supplied (though prototype photos clearly show such boards on the ends). Luckily I had some leftover resin placard boards which were not needed in an earlier project, so used those, but in any case they would not be hard to scratchbuild from styrene.
At this point, I decided to attach the underframe to the car body. The kit directions describe considerable work being done after the running board details are installed, but I postponed roof details until after the work on sides and ends is done. With the underframe installed with CA, the following photo shows the point I had now reached. Brake rodding is modeled with 0.020-inch styrene rod. Coupler boxes are installed empty, so they can be painted along with the rest of the model.

Next I installed what I call my “interim truck support blocks,” to have something on which to rest the car body during further work (you can read my post about these blocks at this link: http://modelingthesp.blogspot.com/2014/11/interim-truck-support-blocks.html ). Meanwhile, I continued with work on the car sides and ends.
One small hint: the separate resin doors need to be exactly positioned to match the car side details. For this kind of job, I normally tack the part in place with canopy glue, which permits some small adjustments before it is fully set, then go back and carefully apply CA with a pin at the edge gaps around the door. An earlier post about canopy glue may be of interest, at: http://modelingthesp.blogspot.com/2013/05/a-few-words-in-praise-of-canopy-glue.html .
With the underbody installed and most of the detailing done, the car body looked like this. 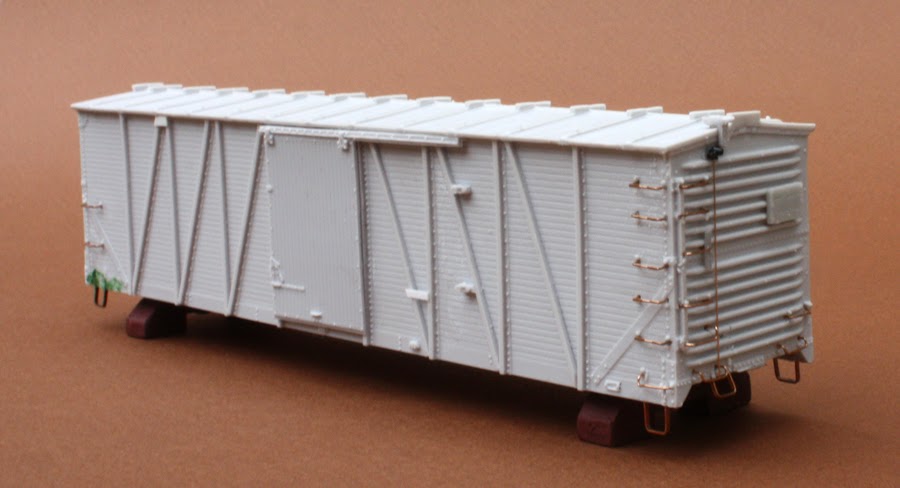 Brake staff and wheel remain to be added, along with running boards.
With the second major phase, detailing the model, about done, I will stop here. Painting, weathering, and lettering will be shown in the concluding post.
Tony Thompson
Posted by Tony Thompson at 10:18 AM