I have discussed in several previous posts the problem of not only getting the right cars into my car fleet, but getting the “wrong” ones out. One discussion of this was mostly about selling off kits or assembled cars that no longer fit my standards or m layout needs (that discussion can be found at the following link: http://modelingthesp.blogspot.com/2012/02/thinning-collection.html ). Another discussion of this subject was mostly about upgrading, and you can see it at: http://modelingthesp.blogspot.com/2012/08/choosing-model-car-fleet-update.html . Then a third post, which I wrote about a year ago, provided some numbers of cars sold, upgraded or replaced (that one is at this link: http://modelingthesp.blogspot.com/2013/10/evaluating-freight-car-fleet.html ). I guess this continues to be a subject that interests me, because I have been thinking about it again lately, and will summarize a few of the more recent thoughts here, primarily thoughts about the size of the fleet.
One part of the fleet size problem is the proper selection of foreign-road cars, that is, non-SP cars. I think it is possible to be systematic about such choices, as I have written in several blog posts and also in my “Getting Real” column in the on-line magazine Model Railroad Hobbyist. The first such column, explaining the basis for choices among nine major railroads, was published in April 2013 (like all issues of MRH, it’s available free for download at: mrhmag.com/magazine/mrh-2013-04-apr/ ). I am preparing a second column like that, to cover ten more railroads, for an upcoming issue of MRH. Accordingly, I won’t touch further on that topic.
A second problem, especially for those of us who have been in the hobby for some time, is that those “compromises” we had to make, years ago, no longer look very acceptable. At one time, I upgraded details and relettered a whole bunch of Athearn Blue-Box reefers and box cars for desired prototypes. Most of those models are now gone, sold cheap or given away. The same goes for my stash of unbuilt Blue-Box kits (the intended raw material for even more of those projects).
An example of an Athearn box car, somewhat upgraded, is this effort at an SP Class B-50-18 box car. It does have weathering, a wood running board, wire grab irons, Detail Associates sill steps, and a scale-size Ajax brake wheel, but the door height (and door claws) were not fixed, and the molded-on ladders were left alone too. It’s been sold. 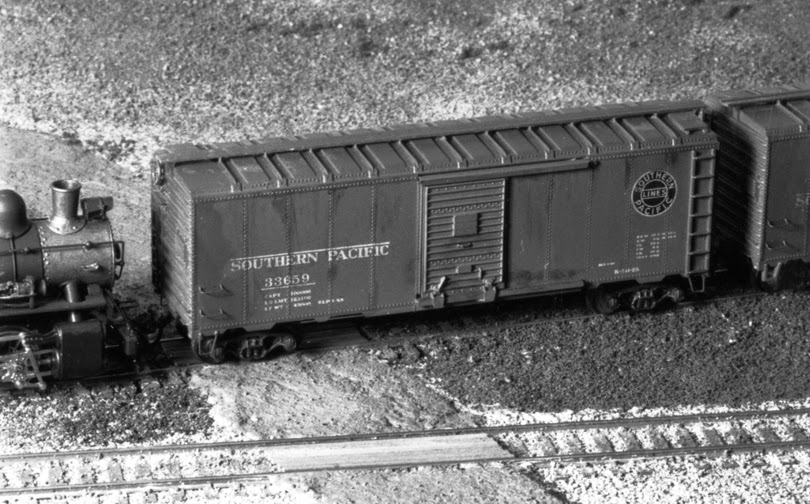 Also on the way out are a number of perfectly good models, some built but most in kit form, which no longer fit the kind of layout I now have. Many of these have gone already, and more will go.
In fact, because I have long kept a list of the kits on my shelves (originally created so I would not buy needed ones a second time), along with a log of how any car with complications was built (to help with repairs or further changes), and an overall car roster, I do have records of my fleet. And I update all of these, when kits or cars depart, by moving their entries to a “Departed” list. Looking at these lists now, I can add up the changes.
Since about 2005, I have sold, traded or given away about 310 kits or complete models. In the same time span, about 275 new cars have been added to the fleet, by building kits, and finishing kitbashes and ready-to-run cars (what Richard Hendrickson liked to refer to as “ready to finish” cars). This is not too bad a number, because though high for my layout, it allows flexibility.
The bad news is that I also have around 75 older cars, not really up to current standards, at least some of which ought to go, and have around 100 unbuilt kits of various kinds, some of which probably won’t get built, and at least 25 already set aside for sale. So my job of “right sizing” my freight car fleet for my layout still has a ways to go.
Tony Thompson