Fourth anniversary of this blog

I began this blog about Southern Pacific modeling on December 8, 2010, a date chosen not for any reason other than I was ready to begin. And once again this year, as has been the case on each of the three prior anniversaries, I am surprised and impressed with the viewership this blog has enjoyed.
I have remained fairly consistent in presenting about ten posts per month, and about 120 or 125 per year. These have varied widely in how many comments they receive, but as was true last year also, increasingly those with questions, corrections or comments tend to email me directly. That’s not a complaint, just a description.
Page views have continued at a high level. The first year there were about 50,000, a number which seemed impossibly huge to me when I saw it, and far beyond anything I had ever imagined would happen with this blog. The following year there were almost 100,000 more, bring the total to 150,000 after two years. Even more impressive to me.
The third anniversary in 2013 brought to light even bigger annual viewing numbers, reaching almost to 300,000 views total, thus almost 150,000 additional views in that one year alone. Since then, the viewing has continue to increase, though the rate of increase has flattened out; totals continue quite substantial. The total has now passed 468,000 views over the four years, meaning that there were almost  170,000 new views this past year. I can’t say it enough times: I am just amazed—and also very gratified.
The original goal was to present a perspective on modeling the SP, and to add historical as well as modeling information where possible. I believe I have been doing that, and have been able to cover a number of modeling projects on my SP layout as well. That makes it fun, as I would now plan any project, whether rolling stock or layout, with photography in mind, to document in a future post. This has probably increased my percentage of completed projects, if nothing else!
There have been new features too. These include increases in the number of documents posted on Google Docs and available to anyone on the Internet, and also now reference pages, accessible by the list at the upper right of the blog page. I combined eleven posts about my method of freight car weathering using acrylic washes, into two reference pages, one on the basic method, the other on specifics for individual car types and additional details.
What lies ahead? Obviously to some extent, more of the same, but hopefully more than that. Here is a teaser. It’s from the Richard Hendrickson photo collection, in the process of transferral to the California State Railroad Museum, and the print was entirely unmarked on the back, so I don’t know source, location or date. But it clearly shows ICC 104-type tank cars being loaded. 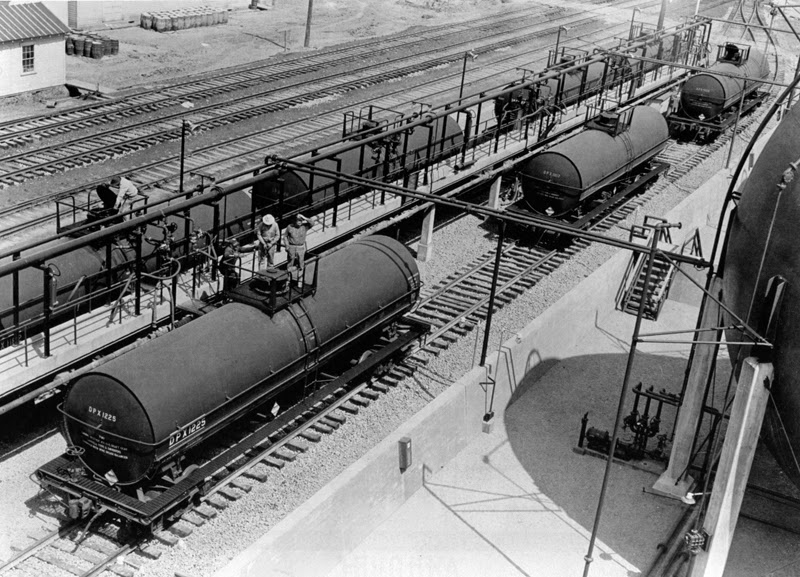 What is this a teaser for? You’ll have to wait and see.
Tony Thompson
Posted by Tony Thompson at 9:27 AM