I have long wanted to figure out how to model the post-World War II automobile cars that SP built, 50-foot double-door cars of classes A-50-15, -17, and -18. There is no commercial model particularly close to any of the three. Ironically, the third one, A-50-18, is not as hard a modeling challenge, but because it was built during 1954–1955, which is after the time I model, my interest is focused only on the first two.
The cars of Class A-50-15 were built by General American in late 1946, while the other two classes were assembled at Sacramento Shops using commercial components such as sides, ends, roofs, and doors. Southern Pacific, through its SP Equipment Company, built quite a few cars for the railroad in the decade or so after World War II, and liked to publicize the fact with photos like this one, showing automobile cars on the assembly line at Car Shop No. 9 (it’s an SP photo). 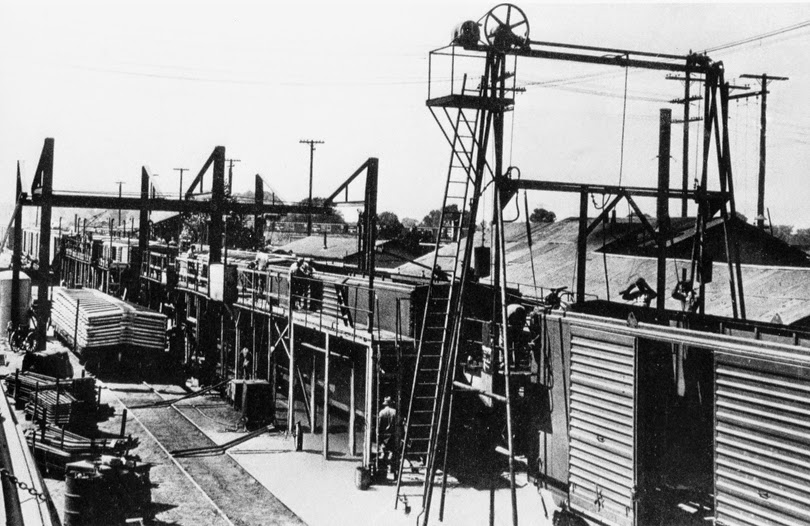 To choose between classes A-50-15 and -17, the -15 class comprised 750 cars built in late 1946, and is a tough modeling challenge, because it had Improved Dreadnaught ends. straight-panel roofs, and the early postwar welded doors, 8 feet wide, with wide seams. This would require some kitbashing to combine all these elements.
Kit modification is also necessary for Class A-50-17, as I will show, though to a definitely lesser degree, and since this class comprised 1500 cars, it would be more commonly seen. It too had Improved Dreadnaught ends, but a diagonal-panel roof, and conventional-seam postwar doors. There is a Branchline (now Atlas) kit which has these ends, roof and doors, but the sides for this class (and for the A-50-15 cars also) pose a problem, about which, more in a moment.
Here is what car 190000 looked like, the first of the class. SP eventually built 500 cars numbered 190000–190499, all with Evans Type F auto loaders, and 1000 additional cars, numbered 192000–192999, of which only 100 had the Evans loaders. So overall, there were 900 plain cars and 600 cars with loaders. The photo below, taken from the A end, shows the door stripe indicating loaders. 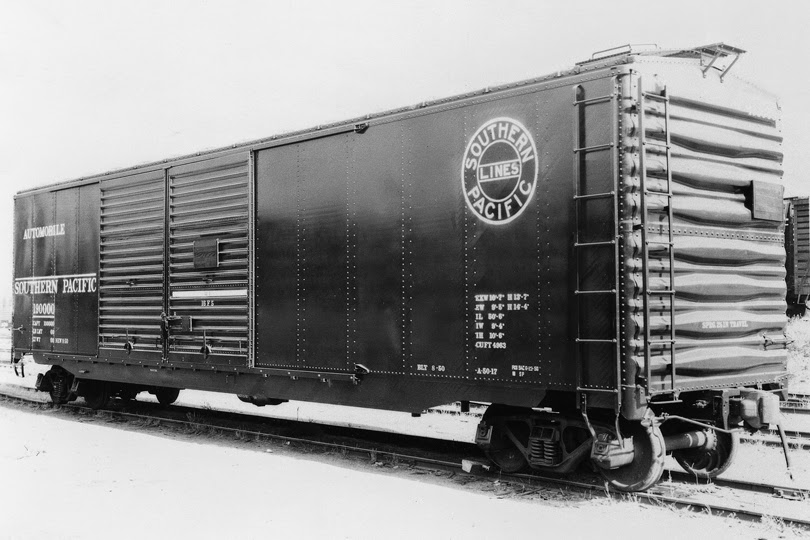 The photo was taken by Southern Pacific at Sacramento Shops in August 1950, and is provided here courtesy of the SP Mechanical Department collection at Stanford University Libraries.
The problem I alluded to with car sides is that SP had introduced a new kind of side post in the prewar automobile cars of Class A-50-14, a hat-section post with the “legs” flanged so they could both be riveted to side sheets. This gave rise to double rivet rows at each seam, with the “outer leg” of the post (relative to the seam) riveted with double-spaced rivets. This segment of a drawing of the sides shows what I mean. Note that all panels are the same width, 3 feet, 6-13/32 inches, and that the wider rivet row is exactly double the spacing of the inner row. You can click to enlarge the image.

Here is a detail of a photo from the builder, General American, showing this rivet arrangement (on a car of Class A-50-15). Perspective may make the rivet rows not look aligned at double spacing, but the drawing proves that they are.

Only some commercial models of automobile cars have included this kind of rivet pattern. The fine Proto2000 model (now Walthers) of the SP’s Class A-50-14 prewar car does have these rivets, but has the wrong roof, ends and doors, not easy to replace, compared to rivets. The Branchline car has single-row rivets at the side sheet seams, and also has the wrong panel arrangement, with five panels to the left of the door opening and eight to the right, whereas the SP cars had four to the left, six to the right. So the project is to remove the Branchline rivets, and replace with the right number of panels, and double rivet rows.
In past years, applying large numbers of rivets would have been an almost impossibly tedious task, but today, with the excellent products of Archer Fine Transfers, it need not be a hard job at all. Because I wanted to model the SP Class A-50-17 cars, I provided the prototype data (taken from the drawing above) to Archer, and they produced their set AR88108, which is exactly this kind of double rivet row. This particular set is shown below; for more, you can visit their web page at: http://www.archertransfers.com/AR88108.html . 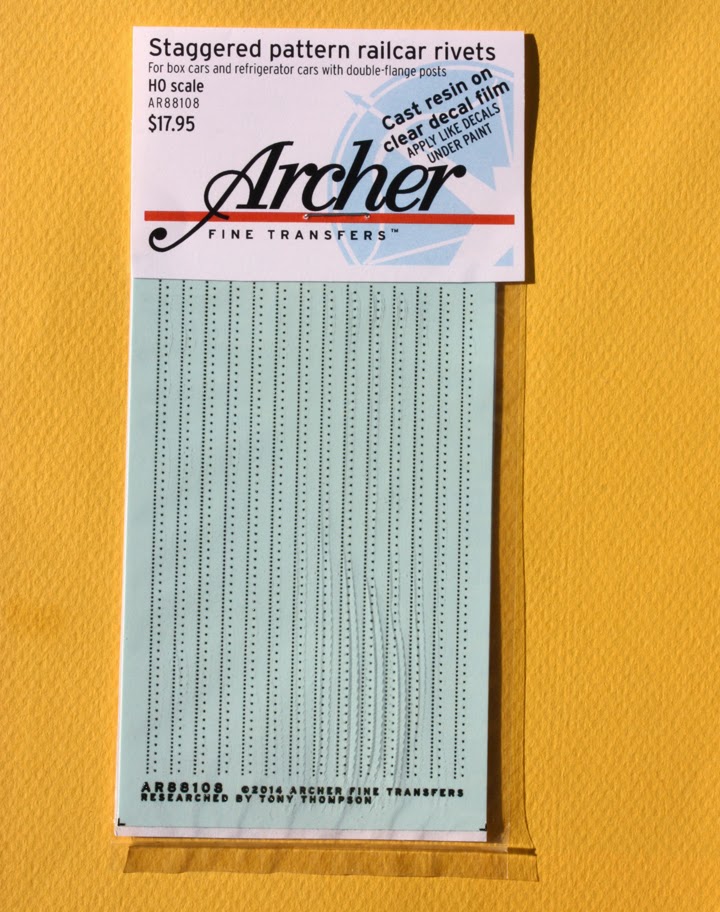 This rivet set is the last barrier to a practical project to model SP Class A-50-17, starting with the Branchline (Atlas) car and simply replacing the rivets.
So I have in fact gone ahead with a model of one of these cars, and have submitted the modeling part of the story to the Southern Pacific Historical & Technical Society magazine Trainline. I expect it to appear soon. I will probably also post a summary here.
Tony Thompson
Posted by Tony Thompson at 12:13 PM