Awhile back I presented three posts about modeling a helium car in HO scale, starting from the AHM model. The final post in that thread was Part 3, describing paint and lettering; you can go back and access that post from this link: http://modelingthesp.blogspot.com/2012/11/helium-cars-part-3.html . The latest issue of The Warbonnet, magazine of the Santa Fe Railway Historical & Modeling Society (SFRH&MS), which is for the Fourth Quarter, 2014, has just arrived, and has excellent coverage about helium cars.
There are two parts to the coverage. Leading off is a reconstruction by Warbonnet editor John Signor of Jay Miller’s excellent clinic on helium car traffic from five or so years ago, and with much more material than has been on the SFRH&MS web pages I cited previously. It contains extensive photography from the U.S. Bureau of Mines, which built and operated the gas extraction plants, and also took over the operation of the helium tank cars from the U.S. Navy in 1955. There is a helpful helium-plant plan drawing and plant photos, for those intrigued by the source.
Here is an example of the interesting photos, this one taken at the Exell, Texas helium plant in 1961 (U.S. Bureau of Mines photo). 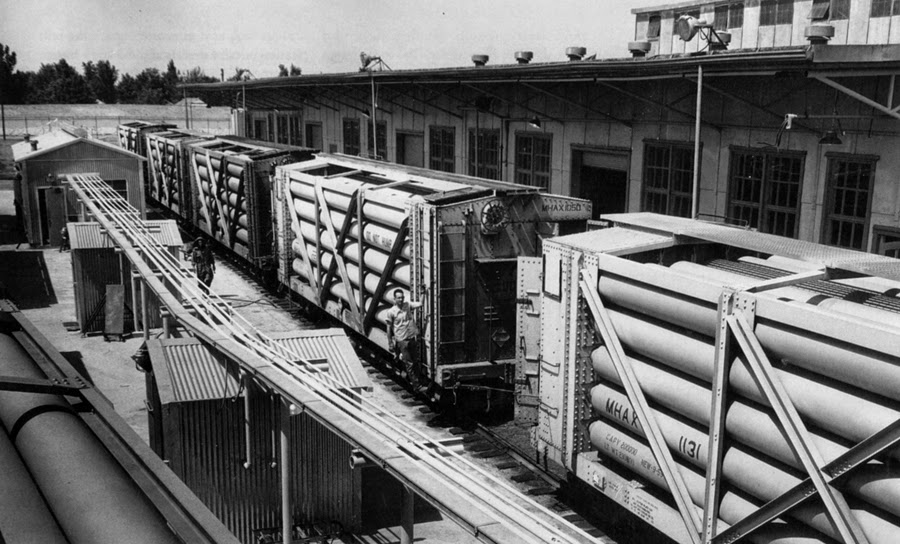 Accompanying the Miller material is a fine modeling article by Pat Bray. Pat decided to model one of the helium cars, starting from the AHM model, but unlike the work I described, he chose to mill off the cast-on side and top bracing of that model, and then replace it with separate styrene channel. It certainly improves the look of the car. The look I achieved by leaving the cast-on bracing in place, can be seen in my Part 3 article (link at top of page).
Copies of this issue of The Warbonnet magazine are available for non-member purchase. Go to the SFRH&MS web site, then to the Company Store, at: http://atsfrr.org/store/war-Vol20-14.htm . Non-member price of the issue is $10.95. The magazine, incidentally, contains a heart-warming piece by Richard Hendrickson about his teenage experiences with the Santa Fe at Oceanside, California. Anyone who knew Richard can just hear him telling these stories.
Two important points to anyone wishing to do a helium car. First, the trucks. I showed a method to modify a Model Die Casting / Roundhouse truck for my model; see http://modelingthesp.blogspot.com/2012/04/helium-cars-part-1.html .  The Roundhouse 100-ton trucks, used on the SP 100-ton ore car they produced, are only intermittently in stock at Athearn. When the ore cars are re-run, extra trucks are made, but are only kept in stock while supplies last. At least this is how it was explained to me by the person I spoke with at Athearn. So to do this project, you may have to shop at swap meets to find one of the MDC ore cars, or be patient until the trucks are next in stock at Athearn.
Second, the decals can be a problem. With Jay Miller’s support, I persuaded Jerry Glow to offer the Navy car decals, but Jerry is now out of the decal business, and whether his line of decals will reappear is unknown. Artwork for decals is available as a PDF from the artwork creator, Alain Kap, at: http://www.atsfrr.com/Reviews/HO/Freight/Helium/HeliumDecals.pdf . This artwork is for the post-1955 MHAX and ATMX reporting marks, as well as for the pre-1955 USNX reporting marks. At present I am not aware that decals are available, although I understand a couple of parties are working on this.
Tony Thompson
Posted by Tony Thompson at 10:01 AM