One of the distinctive SP tank car classes was O-50-9. It was the first with a truly “SP standard” tank, in terms of proportions. Southern Pacific had been buying tank cars of 12,500-gallon capacity for some years, but designs varied, up through Class O-50-8. But classes O-50-9 through -13 all had the same tank proportions, which in HO scale is exactly provided by the Athearn tank car.
One key in modeling Class O-50-9 is the availability of a good detail part for the elbow safety valve, actually a double safety valve in one elbow, characteristic of this class. Later classes all used dome-top instead of elbow mounting for safety valves. The recent elbow valve from Owl Mountain Models solves this problem. This is Part No. 1002. You can purchase it on their web site, at: http://owlmtmodels.com/ , but unfortunately the website does not yet include photos of parts.
The goal, then, is to model a car like the pair of prototype photos below, showing the same car of Class O-50-9 from each side. Note that there is a dome walk only on one side (the left side, as seen from the B end), and the elbow safety valve arrangement (toward the B end) is evident too, as are the prominent circumferential rivet rows. (SP photo, courtesy Stanford University Libraries) 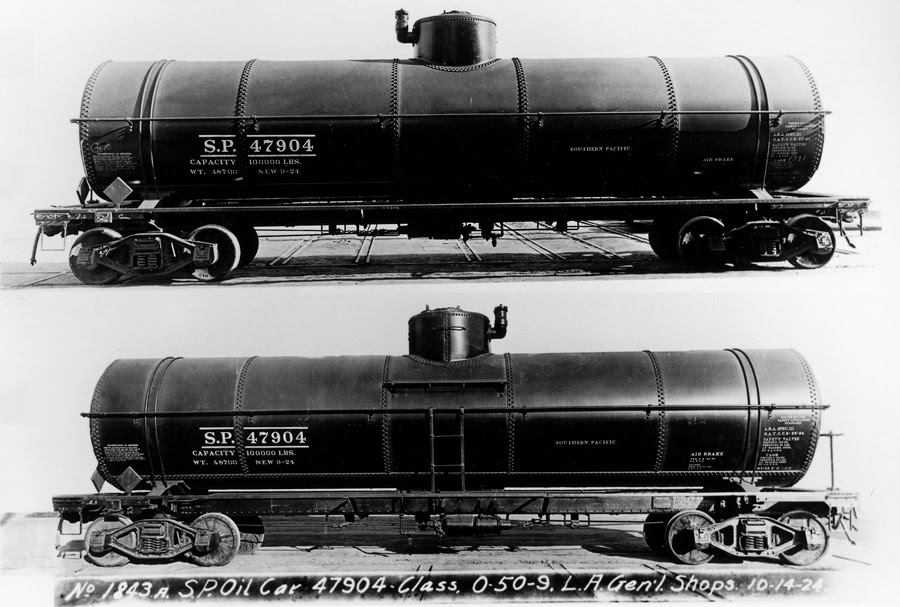 Small recommendation: choose a light-colored car as a starting point if you can, because it is much easier to see what you are doing. This will be especially helpful when the addition of Archer rivets comes along. Of course you can always spray on a “witness coat” of light gray primer, or any other light color.
Next came removal of one dome walkway, of tank-end molded grab irons which will be replaced with wire, and adding the dome-height correction (see my first post, cited above, for specifics on the overall method). And finally, the top rivet seam must be removed, while preserving the hold-down bands, because I am modeling a car with circumferential seams on the upper tank. For tasks like removal of that rivet seam, or the grab iron removal, I always use a brand-new X-acto chisel blade.
Here is the same car body, a little farther along, shown from the side with the removed dome walk. The dome top never fits perfectly, and some Squadron Green putty is applied to correct that. But all major things needing to be removed from the tank body are gone, and raising the dome-top means that from here on in, it will all be about adding things.

Note that the middle handrail support from the original trio on each side of the car center has been removed, as the added circumferential tank sheet will go there. The offending single safety valve has been removed from the dome top also.
So with the completion of the “removal phase” of work on this model, I am ready for the next phase, involving the addition of new parts, especially the circumferential rivets.
Tony Thompson
Posted by Tony Thompson at 10:14 AM